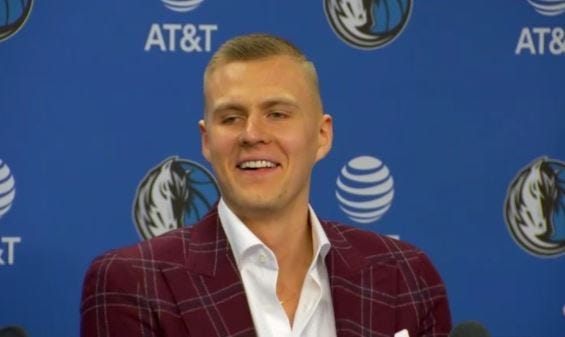 Following his first practice with the team since being traded from New York, Porzingis talked about how excited he was to be playing with the Mavs and with fellow teammate Luka Doncic, and confirmed that he would in fact be out for the rest of the season.

"I get excited every time I think about it. I think we can be something special," Porzingis said about the prospects of playing with Doncic.

KP: "I believe that if we do play together long term - we clicked from the beginning - and I think that's going to translate on the court." https://t.co/UQyEXTQ30a

When asked about playing with Dirk, Porzingis said, “Dirk is a guy I looked up to growing up. I’ll use every moment I can to bother him and ask questions.”

By the time Porzingis returns to the court in September, it will have been 20 months since he last played in an NBA game. He and owner Mark Cuban aren't concerned, however.

"Whatever the plan was with the previous organization doesn't matter," said Cuban. "The one hundred percent plan is for him not to play. We have our own doctors that will look (at him)."

"Obviously, I expect there to be some rust. I'm a guy that visualizes a lot," said Porzingis. "Hopefully, I'll be quick to get back in a rhythm."

When asked to further clarify the plan, Porzingis opened up a little bit on his health.

"As Mark said, we're going to sit down and evaluate the whole situation and make a plan for my rehab," Porzingis said. "I feel great but we're taking our time. There's no rush. I've been patient this whole time and I'm going to keep staying patient, which is one of the hardest things for me to do. We're going to make the right decisions."