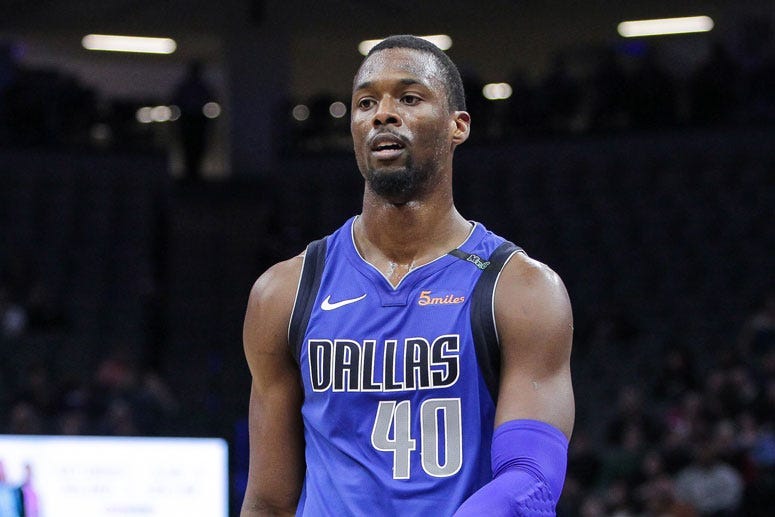 February 7, 2019 02/07/2019 3:25 am
DALLAS (105.3 The Fan) - The Dallas Mavericks have traded Harrison Barnes to the Sacramento Kings in exchange for Zach Randolph and Justin Jackson, according to multiple reports.

ALERT - Source: 'Justin Jackson and an expiring (Z-Bo?)' being traded by #Kings to #Mavs with Harrison Barnes as centerpiece. - @247Sports pic.twitter.com/m9MtNaXqmF

ESPN's Adrian Wojnarowski was the first to report the trade. 105.3 The Fan's Mike Fisher later confirmed that a deal was agreed upon.

The Kings are trading Justin Jackson and Zach Randolph to the Mavericks for Harrison Barnes, league sources tell ESPN.

The 26-year-old Barnes is averaging 17.8 points and 4.3 rebounds this season for Dallas. He was in uniform, seated on the bench, when the trade was reported in the middle of the Mavericks game against the Charlotte Hornets Wednesday night in Dallas. He remained on the bench for the entire fourth quarter.

Harrison Barnes was on the court for the Mavericks when reports came down that he was traded. pic.twitter.com/YnqCbW3cuV

"I got word of it in the middle of the game and that's obviously why he didn't play down the stretch," Carlisle said. "I had a chance to speak to him and thank him before everyone got in the locker room for over two and a half great years of being a model pro. I'm going to miss him an awful lot, but I believe he's going to have a great situation with where he's going.

"He's a special guy. He's about all the right things on the basketball floor, in the community. And he's an example for what you want your kids to be."

Barnes left the locker room without speaking to reporters.

The 37-year-old Randolph has sat out the entire season as the Kings opted to play their younger playes this season. He averaged 14.5 points and 6.7 rebounds last season. He's in the final year of a two-year, $24 million contract.

Dallas is expected to discuss forward Zach Randolph's future with him and his agent, Raymond Brothers. Randolph, 37, was never activated this season on the young Kings team. Randolph could become a free agent and look for a new team to sign him.

Wojnarowski reports that Dallas is expected to work with Randolph's representives about his future with the team. Dallas could potentially buy him out, allowing him to re-sign with a team in playoff contention.

Jackson, a 6-foot-8 small forward, is averaging just under 7 points and nearly 3 rebounds per game for Sacramento this season. The Kings selected him in the first round of the 2017 draft out of North Carolina. He'll earn $3.2 million next season and has a team option for just over $5 million in 2020-21.

The trade is all about cap space for the Mavericks as they look to build around their young superstars in Kristaps Porzingis and Luka Doncic. After the deal, Dallas will have around $30 million in room this summer.

Dallas still has time to make more deals before the 2 p.m. CT trade deadline on Thursday. Dwight Powell has been another player rumored to be on the trading block.