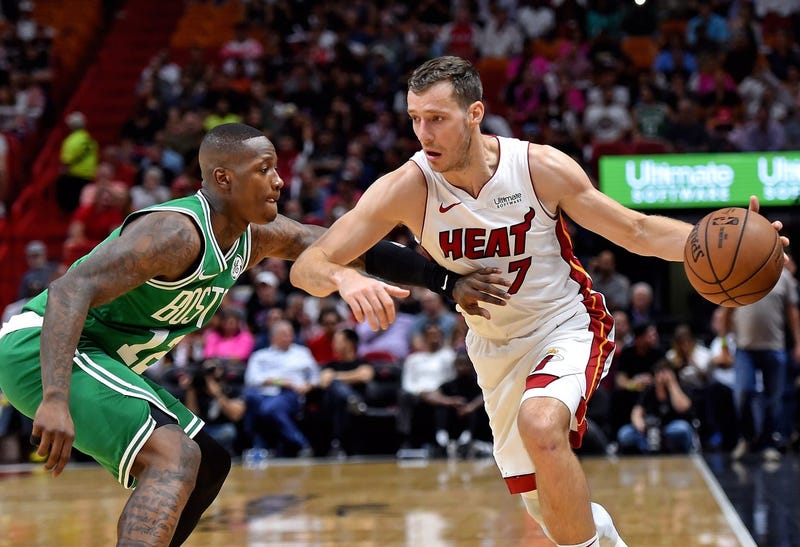 July 12, 2019 07/12/2019 10:40 pm
DALLAS (105.3 The Fan) - We have written frequently in this space (and reported on the air at 105.3 The Fan) an assortment of Exclusive-Exclusives regarding the Dallas Mavericks' desire to unload Courtney Lee and the ballast of his $12.76 mil contract in a trade.
We're told that on NBA Draft night three weeks ago, Dallas about had a deal done. Then, on June 30, on Opening Night of NBA Summer Shopping, the Mavs also thought they had a deal done, this one to bring Luka Doncic mentor Goran Dragic here from Miami. And most recently we've given you the scoop that since we broke the story first is now making the national rounds: A proposal of Lee and a second-round pick to Memphis for Andre Iguodala.

Marc Stein of the New York Times updates our report by noting that Memphis desires a first-round pick in an Iggy deal; that's not happening with the Mavs.

So let's circle back to the Dragic idea.

Miami has a new motivation in moving him now that Chris Paul has been peddled from Houston to Oklahoma City (in exchange for Russell Westbrook) ... with OKC now wishing to dump Paul elsewhere.

If OKC wants to move Paul to Miami (and, in this agent-driven league, if that's what Paul wants), the transaction may need the help of a facilitator who can complete a three-way trade.

As of Friday morning, there were guesstimates as to how much cap room Dallas was left with. Maybe $6.333 mil in room. Maybe $6.348 mil. No one knows because no one has official numbers from the NBA yet regarding the year-by-year breakdown of the new contracts.

But using those guesstimates, the Mavs as of this morning were somewhere between maybe $24,000 or $9,000 short of being able to go under the cap and trade Lee for Dragic.

However, at 10:36 a.m., Kristaps Porzingis finalized his five-year, $158-mil deal with the Mavs. And so now that tight Lee-for-Dragic fit is too tight.

But do Paul and the Heat still want one another? For the sake of this exercise, let's assume they do. And would the Mavs still like to add Dragic to a backcourt that filled up a bit after that June 30 debacle due to the ensuing acquisition from Memphis of penciled-in starting point guard Delon Wright?

Let's assume they do. The Mavs personnel department has always liked Dragic and as for the rest of the front office? Dragic, while aging, might be the single person on the planet who embodies the all-important "Luka-friendly'' factor.

So OKC dumps Paul and gets Miami's picks and some bodies, Miami gets Paul and gets out from under Dragic's $19.2 mil ... but Dallas needs more value to trade-match, so the Mavs ship, say Trey Burke along with Lee to get it done. And Goran Dragic is a Mav, to the delight of many at Mavs HQ ... including their Rookie of the Year.