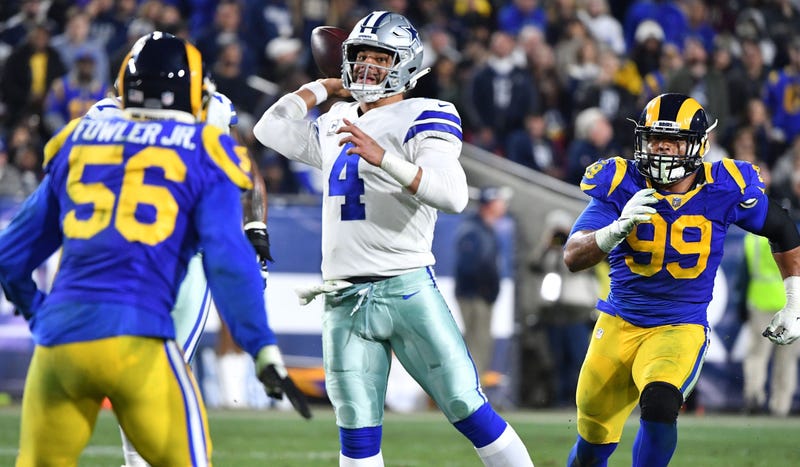 Rumblings started to filter through to the public last week after the 3rd week of Cowboys OTA’s that inside The Star, many are giddy about the potential progress Dak Prescott could take in his 4th NFL season. In my estimation, Dak has been an above average QB in the first three years of his career, but I fully understand the polarizing nature of that opinion. I’m one of the biggest Dak defenders on this station, but I know that there are many members of the Cowboys fanbase who need to see more before Dak is offered a multi-year $30+ million dollar contract.

Instead of getting bogged down in that mess, I thought it’d be interesting to take a look at when some of the other highest-paid QBs in the league took that proverbial “step forward.”

First, we must look at Dak’s first three seasons in the league.

*Note he had 6 rushing touchdowns in each of his first three seasons.

I’m not sure what TD pass number would make fans happy, but could this be the year that he jumps up to that 28-32 range? That’d be cool.

Also, it's interesting to see that Russell Wilson, much like Dak, has never had a losing season. Another similarity Dak and Wilson have are fumbling issues. Russell had 31 fumbles in his first three seasons, compared to Dak’s 25 fumbles in his first three seasons. Dak had 18 rushing touchdowns, compared to Russell’s 11 in his first three years. Combine all of these fun stats with the reminder that Russell was thrown into the mix immediately, just like Dak, and you have a pretty reasonable comp for what you hope Dak can be moving forward. Seeing Russell really take that step forward statistically in year four is something that should give Cowboys fans some optimism heading into 2019.

Just for fun, one of the arguments I hate the most in the Dak contract conversation is the idea that you can’t pay other guys if you give Dak a huge contract.  It is interesting to me that Seattle has the 10th most cap space in the league, and again, still has never had a losing season in the Russell Wilson era. Moving on…

Rodgers did have minimal experience in 2005, 2006, and 2007, but nothing more than 3 games before being handed the keys to the Packers Dodge Stratus in 2008.  Rodgers next step forward actually happened in the 2010 playoffs as they went on a run as the 6 seed all the way to the Super Bowl in frigid Arlington, Texas. But to stay true to the study, you look at 2011’s mind-blowing numbers and you see that it was the 4th year where you can really look on paper and see that Aaron Rodgers was a new man in the same way we’re hoping Dak will be that new guy in 2019.

Quickly looking at some others, Matt Ryan never threw 30 touchdown passes until his 5th season, which was also the same year that he first had a completion percentage over 65%.  It was at 69%. Nice.

As for Ben Roethlisberger, his first three years in the league are pretty weak in comparison to Dak, but once again it was the 4th year where the numbers tell you that he took that “step forward.”

These are just a few examples.  I left out some names due to the unique nature of their situations.  Kirk Cousins comes to mind, and to his credit he was incredibly productive after 3 years of part-time action in Washington. Matthew Stafford, on the other hand, had 41 touchdown passes in his first sixteen game season, but his rookie year he started 10 games and his 2nd year he only started three games.  Jimmy Garoppollo just hasn’t played enough to even mess with looking at his numbers. As for Cam Newton, his first year of throwing over 30 touchdown passes was year 5, while his career completion percentage is under 60%.

I understand there are other numbers to browse through, and trust me I’m a proponent of some other key analytical stats, but I thought this would give us a pretty good outlook of why it’s okay to be pretty optimistic about Dak taking the next step in 2019.  In summary, pay him now, save the money on the back end.