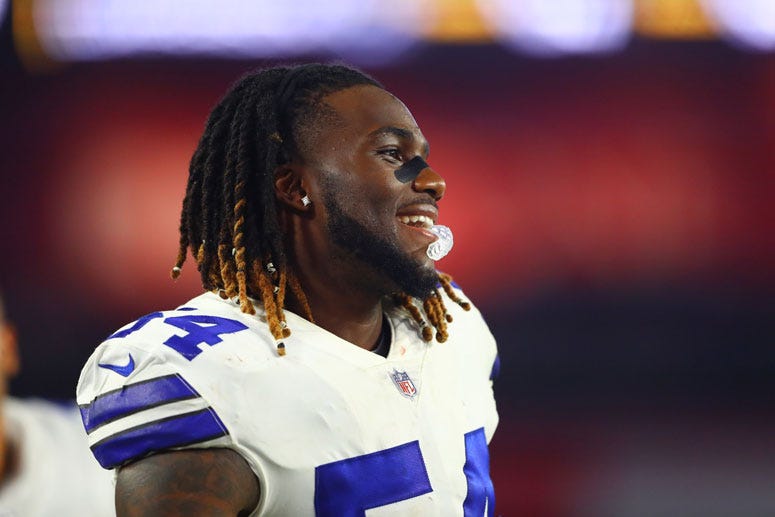 FRISCO (105.3 The Fan) - The Dallas Cowboys have, I'm told, opened contract negotiations with linebacker Jaylon Smith, who isn't atop the priority totem pole but who might nevertheless be as interested as any Cowboy in buying into COO Stephen Jones' position that "The Ring's The Thing'' when it comes to earning money as a member of a successful version of "America's Team.''

Jones has gone public in encouraging his stars like Dak Prescott, Amari Cooper and Ezekiel Elliott -- all of whom are eligible for contract extensions -- to consider taking "less than their max'' to re-up with Dallas. The selling point? A player's non-football business career as a Cowboy can be just that lucrative.

That's what the Dallas Cowboys are selling. I do believe that Jaylon Smith is interested in buying.

Call this a "very-educated guess,'' but I am surmising that the Cowboys and Smith's side have begun negotiations on a contract extension that could allow the stellar young middle linebacker to leapfrog some of his teammates in getting a deal done. That doesn't mean Jaylon is higher on the importance totem pole than Prescott, Cooper and Elliott. Rather, it means that my sense is that Jaylon's desire to keep his business and personal roots in North Texas (along with in his native Indiana) drive him to listening to the Cowboys now, even though technically he is under contractual control here for two more seasons.

Smith is only a restricted free agent after 2019. Dallas can, in theory, simply allow him to play this year while making his $2 million and then, next spring, tender him a “qualifying offer” to maintain control. Smith could still negotiate with any other team, but if he receives an offer sheet from a new team, Dallas can simply match the offer and retain the player. If the Cowboys don't match, they get draft-pick compensation. (A first-round tender earns the Cowboys a first-round pick). In all likelihood, Dallas would put a first-round tender on Smith, keep him, and pay him about $5 million in 2020.

Or ... the two parties can continue to negotiate now, maybe with a goal of what I would view as reasonable: about $10 million APY. Would the Cowboys go to the C.J. Mosley level? (Mosley signed a five-year, $85 million contract with the Jets this offseason.) Surely not.

But $10 million a year puts him in a pack with about seven other inside linebacker on what we'll call "Tier 2'' -- and, just speculating here -- five years for $52.5 mil to $55 mil with $32 million total guaranteed and $20 million fully guaranteed merits serious conversation here.

On top of his performance on the field (despite him playing middle linebacker, a position around here not valued like QB, defensive end or left tackle), he is the ultimate "RKG'' -- and from his miraculously determined rehab to his remarkably high character (I've suggested his impact on his community might some day be "Staubachian'') -- "Right Kind of Guys'' at this level should not be taken for granted.

But what about the budget? What about "We can’t pay everybody?'' Actually, the Dallas Cowboys can "pay everybody.'' What they cannot do is "max everybody.'' That's Dallas' position here, and it's rather clever; the Cowboys are hinting, with subtlety, that the notably deep roster of talent that might be "next-man-up'' to get a new deal might mean that anybody who dawdles will have to someday get paid in Buffalo or Jacksonville instead of with "America's Team.''

If Jaylon Smith waits patiently, two more years, maybe there is a C.J. Mosley-level offer waiting for him on the horizon. But that's not for two years, and that's not with the Cowboys. Jaylon Smith has business reasons and personal reasons to make North Texas his permanent home. That's why his representatives and the Joneses are exchanging ideas right now, each trying to buy what the other is selling.