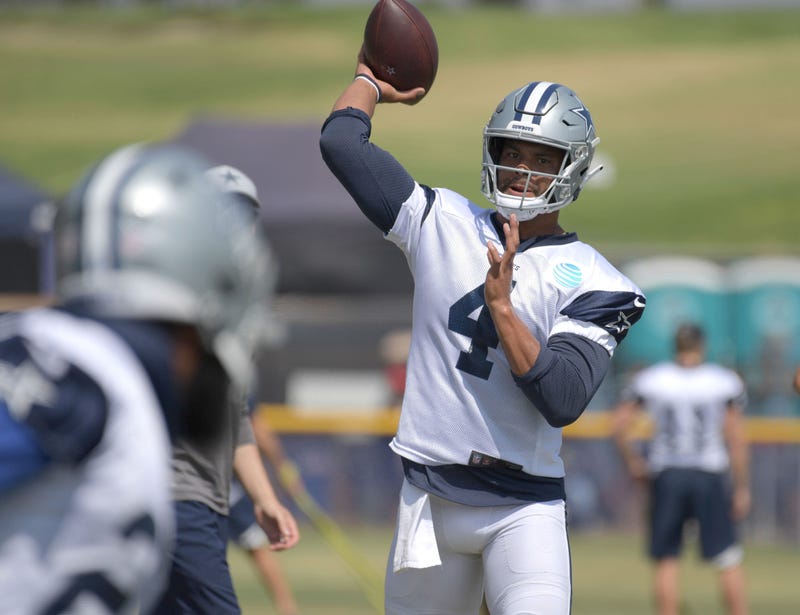 FRISCO (105.3 The Fan) – On Wednesday, Dak Prescott took some positive trips through the red zone. Soon comes another important trip for the Dallas Cowboys QB: To see a former Texas Rangers pitching coach.

The Dallas Cowboys on Wednesday marched through another day of OTAs here inside the Ford Center at The Star in Frisco, and for the second straight day, coaches raved about his work. Said first-year coordinator Kellen Moore: "Being his fourth year and his third full offseason here, in so many ways, he knows it. He's out there just running the show."

On Tuesday, I'm told, it was all about two-minute-drill work, and Dak excelled. On Wednesday, it was about red-zone work, and the self-described "crazy-comfortable'' Prescott earned good grades there, too.

“It’s definitely a bigger focus,” said Prescott on improving from 2018, when Dallas ranked a lowly 26th in the NFL in conversion percentage in the red zone. “But we’ve changed some things up, for one, so we’re not going to sit here and beat our heads against the wall worried about what we did last year.”

One thing that's changed, beyond Moore replacing the deposed Scott Linehan, is the coordinator's perch. Moore will call plays from the sideline this year, with another first-year aide, QB coach Jon Kitna, advising from upstairs.

"I like the sideline, just being able to interact with the players and talk to Dak,'' Moore explained. "I think it will be perfect.''

"Perfect'' may be a stretch. 'Comfort'' -- even "crazy-comfort'' -- might be a more realistic goal. Prescott had a voice in the elevation of Moore and the addition of Kitna to coach Jason Garrett's staff; in a sense, for the guy tabbed by ownership as "our franchise QB'' (soon with a contract that reflects just that) it's part of "running the show.'' And that comfortability with the people guiding and mentoring him is surely among the reasons Dak's confidence seems at an all-time high.

Next on the mentoring schedule: A June visit to Tom House, the former Rangers pitching coach who heads up 3DQB. The plan is for Dak to visit House in California with a collection of pass-catching teammates like Amari Cooper, Randall Cobb, Jason Witten and Ezekiel Elliott in tow. And then will come training camp in Oxnard, where Cowboys Nation hopes it all starts to come together as it did at midseason last year, when Prescott helped Dallas turn a 3-5 start into a playoff berth. He says it was about that time when a light bulb of sorts came on.

Some of what is changing in this offense is about movement and motion and pre-snap deception. But much of it remains grounded in fundamentals, in the running game, and in being better than the man across from you. Dak Prescott seems to think he is just that -- better.

"We talk often about things we like, where this offense is going,'' Prescott said of his brainstorm sessions with Moore and the staff. "It's great. I can say right now, I'm probably as confident and comfortable as I've been."

WEDNESDAY NOTEBOOK FROM THE STAR

*DBs Chidobe Awuzie (hamstring) and Kavon Frazier (recent knee scope) did not take part in the OTA practice. There isn't great concern regarding Awuzie at this time; Frazier should be fine by Oxnard. Dallas is also monitoring the health of linebacker Leighton Vander Esch (pelvis). Sean Lee joined Tyron Smith and Jason Witten in taking a 'vets' day off'' on Wednesday, but on Tuesday, I'm told, it was Lee who served as the starting WILL in Vander Esch's place, with Justin March-Lillard taking a first-team turn at SAM.

*Lewis is a starting corner with Byron Jones (hip) out. He slides to slot corner in the Nickel. But rookie Michael Jackson might have something to say about that slot-corner job. His length does match those desired "traits'' -- and on Tuesday he blitzed from the slot-corner spot, making an impression.

"Very pleased with him,'' defensive aide Kris Richard said. "Intelligent, picks things up really quick. ... I think he's got corner and nickel combo ability for us.''

*Garrett was asked if he talks business -- contracts, really -- with players. The answer is no, and I can go back 30 years to explain why: When Jimmy Johnson first came to Dallas, the idea was that in action, he and Jerry Jones would work in tandem. "Co-GM's,'' if you will, with Jerry holding the official title but Jimmy obviously deeply involved in every decision ... even some that went beyond football. But it took Johnson little time to realize that the job created a conflict of sorts for him. How was he going to coach "up'' a player, telling him all the great things he could achieve, after just having a meeting with his agent in which he told the player how little the franchise wanted to pay him?

That's why Jimmy wisely got out of that racket. And why Jason wisely stays out of it.

Dak, by the way, was asked about Garrett being in the final year of his contract. "So am I,'' he said. "There's no difference. We're both in our last year. It's not talked about. It's not discussed."

Dallas thinks it has something at rookie defensive tackle. Yes, top pick Trysten Hill. But UDFA Daniel Wise is in this conversation, too. ... Fullback Jamize Olawale seemed to be a featured guy on Wednesday. On Tuesday, it was rookie runners Nick Chubb and Mike Weber who got a lot of looks, I'm told. Of course, Zeke is still Zeke -- and another rookie, Tony Pollard, remains an electric presence as a runner and pass-catcher ... Randall Cobb as a downfield threat is a new wrinkle for this offense from the slot ... Garrett had a bump and a bandage on his forehead last week. Garrett told me, "No big thing. Just a procedure to remove something.'' And it's all cleared up now.

"I've been around here 16 years now and have had a few contracts. This organization is extremely loyal to signing their own players. They believe in that. I think these players know that. Those things get resolved." - Jason Witten on Dallas' contractual dealings with Prescott, Elliott, Cooper and others.