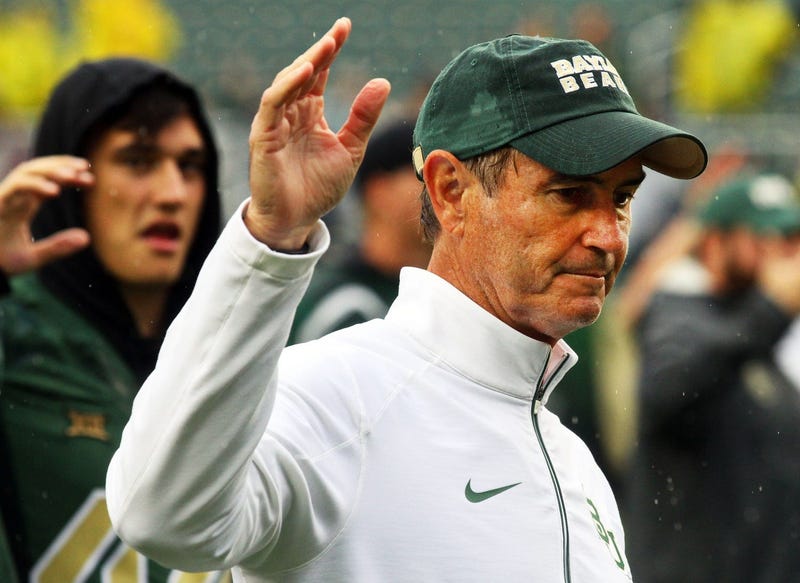 DALLAS (105.3 THE FAN) - Now leading the football program at Mount Vernon High School, Art Briles once again finds himself in a cloud of controversy.

Reversing an earlier decision, a district executive committee has ruled two of Briles' players ineligible.  In a 6-0 vote, superintendents on the 7-3A Division I committee decided the two student-athletes, who moved from Colorado, transferred into the Mount Vernon ISD for athletic purposes.

On Sept. 18, the district executive committee cleared the players, allowing them to remain on the Mount Vernon football team.  It's unknown why the original decision was revisited and reversed.  Briles, formerly the head football coach at Baylor University, was also given a public reprimand.

A spokesman for the Mount Vernon ISD confirmed district officials have begun the process of appealing the decision to the University Interscholastic League State Executive Committee.

"We are disappointed by and disagree with the sudden reversal of field by the District 7-AAA Executive Committee but respect its decision. Facts presented at a previous meeting on this topic on Sept 18 resulted in the exoneration of the two students and validation of their athletic eligibility.

The DEC Tuesday voted 6-0 that the two students moved to our school district for athletic purposes as defined by U.I.L. rules, despite what we believe to be overwhelming evidence that the parents moved from Colorado for employment reasons. The DEC also voted 6-0 that Mt. Vernon ISD used a coach not employed by the district in violation of UIL rules. It then voted 6-0 to give Mt. Vernon a public reprimand for allowing a coach on the field who was not employed by the school.

It is our understanding that NO games will be forfeited as a result of Tuesday’s actions.

Mount Vernon ISD will contact the UIL Wednesday to begin the appeal process. We feel confident that once the facts are reviewed by the State Executive Committee, the decision to punish the two students will be overturned."

Officials say the UIL could take additional action against Mount Vernon, including the possible forfeiture of victories.  The team is 5-0 this season.

Briles returned to Texas to take the Mount Vernon job in May.  He was fired by Baylor in the aftermath of the athletic program's sexual assault scandal in 2015, and in the interim, was coaching an American football team in Florence, Italy.  ​