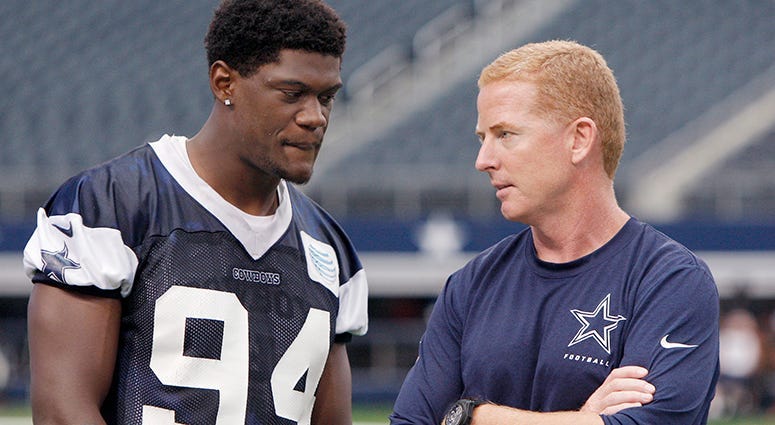 Photo credit Photo by Brandon Wade/Fort Worth Star-Telegram/TNS
By 105.3 The Fan

DALLAS (105.3 The Fan/AP) - The Dallas Cowboys are standing behind Randy Gregory despite the defensive end being suspended indefinitely for violating the NFL's substance-abuse policy.

"We fully support Randy. Randy's a good young man," head coach Jason Garrett told reporters including John Machota of the Dallas Morning News at the NFL combine Wednesday. "He's had some issues he's been dealing with. He's been dealing with those issues head-on from day one. He spent a lot of time getting professional help for his issues. He's worked very hard. He's very serious-minded about getting back to an established NFL football player. And he did a really good job for us this year after working through a lot of different obstacles.

"Unfortunately, he's had a setback and he's not going to be with us for the near-term. But we'll continue to support him. He's a good young man who's worked very hard to try to address some challenging issues.

"Again, our eyes are wide open toward the outset. We'll continue to try and support him and provide a good structure for him so he can be his best."

Gregory was suspended indefinitely Tuesday, the fourth time the troubled player has been banned by the league.

The suspension comes about seven months after Gregory was reinstated by Commissioner Roger Goodell following a lengthy process aimed at reviving his career. Gregory missed 30 of the 32 games over two seasons as a result of his first three suspensions.

Gregory had his best year in 2018, posting career highs with six sacks and 14 games. He was reinstated just before the start of training camp last year and was active for the season opener.

While suspensions in the most advanced stage of the league's substance-abuse policy are at least a year, it wasn't immediately clear how long the 26-year-old Gregory's latest ban would be.

His previous suspension was a yearlong ban, and Gregory waited several months beyond that to submit his case to Goodell in hopes of improving his chances. Several teammates wrote letters supporting Gregory's bid.

As with the yearlong ban, Gregory won't be allowed to participate in the Cowboys' offseason program. He can only go to the team's practice facility to meet with the person in charge of his treatment.

Gregory slid to the Cowboys late in the second round of the 2015 draft after testing positive for marijuana at the NFL combine. The former Nebraska standout was considered one of the best pass rushers in his draft, and there was promise early with a strong rookie training camp.

After vowing to owner and general manager Jerry Jones that he could control his issues with marijuana, Gregory only made it through one season. He didn't have a sack as a rookie while missing four games with an ankle injury.

The first suspension, a four-game ban, was announced in February 2016, and he was away from the team during training camp while in rehab. A 10-game suspension came seven months later. Gregory remained with the team while missing those 14 games before playing in the final two games of the 2016 season.

Gregory's yearlong suspension was announced during Dallas' two-week break between the end of the 2016 regular season and a divisional playoff loss to Green Bay. He missed all of 2017.