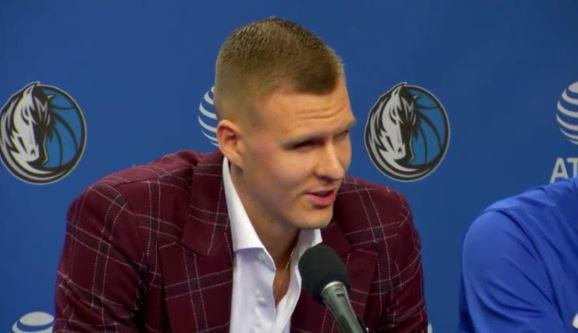 DALLAS (105.3 The Fan) - Kristaps Porzingis has yet to play in a game with the Dallas Mavericks, nor will he anytime soon as he'll miss the rest of the season as he continues to rehab his repaired torn ACL.

Since his arrival in a trade with the New York Knicks a few weeks ago, Porzingis has been seen in practice gear but we've yet to see him in action on the court. Until today...

The European star was seen participating in individual shooting drills with Mavericks' coaches during practice Thursday and Brad Townsend of the Dallas Morning News captured it on video.

If you can make himout on the far end (he’s the 7-3 guy), @kporzee looking pretty good. pic.twitter.com/A5hMITofpZ

There have been reports that Porzingis has been cleared to play but the 7-foot-3 big man is sticking to a plan he and his personal team made prior to the season when they determined he would sit out all season.

"They put together the timetable. That's how the designed all their rehab to that timetable. There's no reason to challenge it," owner Mark Cuban said in an interview with the Ben & Skin Show after the trade was made official.

Mavericks fans will no doubt be clamoring to see Porzingis in game action but this will help ease some fears about how well his recovery process is going.