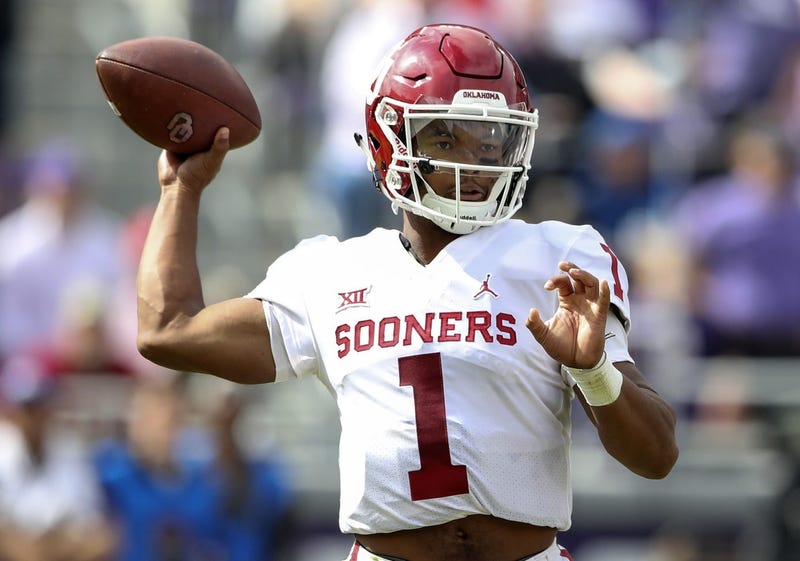 I have declared for the NFL Draft.

Murray announced his decision in a tweet, ending his brief and storied college career. What's next for the Murray is not yet known.

The Oakland Athletics made the speedy outfielder the ninth overall selection last June and agreed to $4.66 million signing bonus. The A's agreed to let him continue playing football, and he made the most of it by winning the Heisman in his only season as a starter for the Sooners. He passed for 4,361 yards and 42 touchdowns and ran for 1,001 yards and another 12 scores, posting the second-best passer efficiency rating in FBS history.

As Murray dominated, his draft stock improved. Jim Callis, a senior writer on MLB.com, said the A's couldn't have foreseen that Murray would be a potential first-round NFL draft pick because of his size. Listed at 5-10 and 195 pounds, Murray would be a small quarterback in the NFL by any standard.

"The primary risk was, what if he gets hurt on the football field?" Callis said, recalling his conversations with scouts before the season. "I don't think anybody was saying he could be an NFL first-round pick."

Once the NFL emerged as a potential option for Murray, the A's took action. Representatives of the A's and Major League Baseball met Sunday with Murray, and the possibility existed that Oakland could offer more money by putting him on the 40-man major league roster.

Even with the A's efforts, Murray would have a shot at a bigger payday sooner in football and he wouldn't have to go to the minor leagues.

"This isn't Bo Jackson showing up and here, we'll pitch you the ball and you outrun everybody, or Deion Sanders helicoptering in and his great speed, coverage skills," Callis said. "When you're a quarterback, you have to put in hours and hours of study running an offense. ... You can't play both sports when you're a quarterback. I think if he wants to play quarterback, which appears to be his greatest love, there can't be any question that he's 100 percent football."

Oklahoma coach Lincoln Riley said in November that if anyone could play both sports, it's Murray.

"I don't want to put it past him," Riley said. " A lot of people would say he can't do what he's done right now — how well he performed for our baseball group here this spring, and how well he's played here for us. So there's certainly some different dynamics with it. Obviously the fact that he would want to play quarterback, if he chooses the football route, is a little different than Deion or Bo or some of those guys. But he athletically is so gifted and can transition between the two."

Murray's road to his NFL draft choice was a winding one from his prep days in suburban Dallas. After a disappointing freshman season in football at Texas A&M in 2015, he transferred to Oklahoma. He sat out a year because of transfer rules, then was the backup during Baker Mayfield's Heisman-winning 2017 season.

Murray then had an impressive enough baseball season in 2018 to draw the A's attention. Callis said Murray is somewhat like a faster version of outfielder Andrew McCutchen.

After he was drafted, Murray took batting practice at the Oakland-Alameda County Coliseum, greeted by "WELCOME TO OAKLAND" on the big scoreboard with his photo. A's manager Bob Melvin, executive Billy Beane and general manager David Forst closely followed Oklahoma football this season as the Sooners reached the College Football Playoff, losing to Alabama in a semifinal.

As recently as last month, the A's said they expected Murray to pursue baseball. Murray had also said multiple times throughout the football season that he plans to focus strictly on baseball after this season.