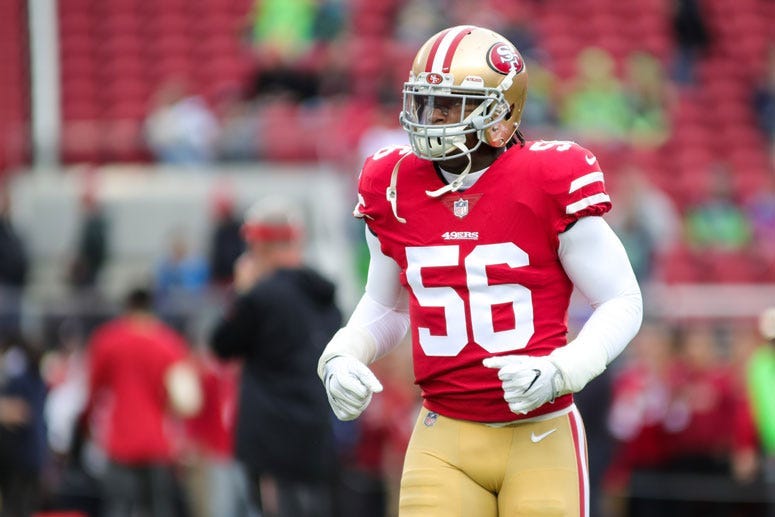 Reuben Foster is down and in severe pain with an apparent injury to his left knee to start #Redskins minicamp. He is going to have to be carted off the field with an air cast. #NFL pic.twitter.com/5v5F4cPmVd

Foster was fined two game checks and reinstated to the Redskins' active roster after an NFL investigation into an incident of domestic violence found he did not violate the league's personal conduct policy.

Foster was allowed to participate in all team activities, including OTAs, which began today.

Foster avoided being suspended in the aftermath of a domestic violence charge from November, which triggered a review based on his previous violations of league policies. Prosecutors in Tampa, Florida, decided in January not to pursue a domestic violence case against the 25-year-old, dismissing the first-degree misdemeanor battery charge.

Foster was arrested at the San Francisco 49ers' hotel in Tampa in November and jailed overnight following an incident involving the second-year linebacker and a companion police identified as the same woman who said Foster hit her in February. The woman later recanted the earlier allegations.

The 49ers released Foster, and the Redskins claimed him off waivers but acknowledged he might never play for them. He was placed on the Commissioner Exempt List after Washington added him and finished the season on it.

The league says Foster acknowledged responsibility for his actions and has committed to a comprehensive accountability plan developed in conjuction with the NFLPA and the Redskins to avoid future incidents.