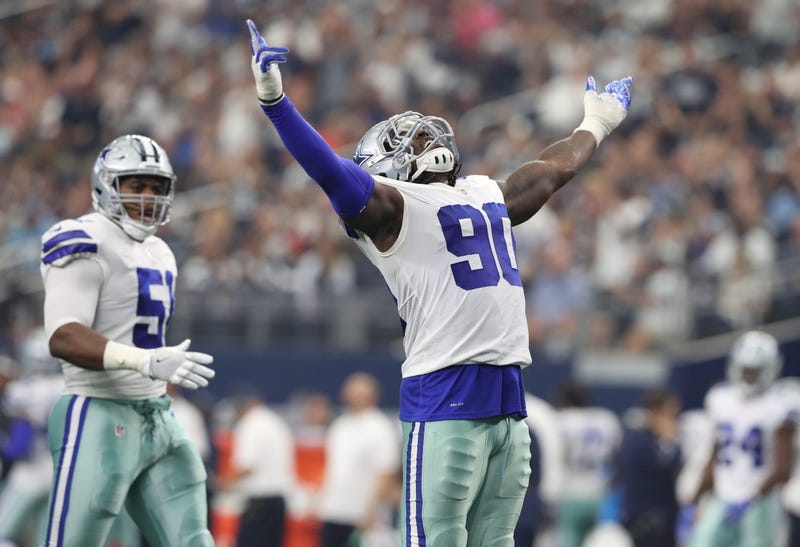 Cowboys COO Stephen Jones on DeMarcus Lawrence: “We’ve made our first offer, and we’re gonna meet with his representatives here at the combine. ... I don’t know about the timing, but I’m confident we can get a deal done.”

"We’ve made our first offer, and we’re gonna meet with his representatives here at the combine. ... I don’t know about the timing, but I’m confident we can get a deal done,” Jones said, per Breer.

Owner Jerry Jones abruptly called into the Ben and Skin Show as the guys were talking about the team while on radio row at the Super Bowl in Atlanta.

During the conversation, Jones touched on DeMarcus Lawrence's recent social media post last week when he said "your move @dallascowboys," in response to a video the team posted on social media showing his various highlights from 2018.

"I make everything plus for DeMarcus, and should. No one has given any more, prepared any better, or performed any better than DeMarcus has," Jones said.

The Cowboys have always wanted to get a deal done with Lawrence, but after a long-term deal wasn't struck in July, Lawrence signed to play under the $17.5 million franchise tag.

The biggest question the Cowboys faced when it came to paying Lawrence was the unknown when it came to his health. Lawrence was coming off his best season as a pro when he had 14.5 sacks and played in all 16 games in 2017. However, he had missed 14 games in the three seasons prior, so Dallas wanted to see if he could perform and stay on the field in back to back seasons.

Lawrence made good on those questions, and he certainly appears to be on his way to getting the long-term deal he desires after putting up 10.5 sacks this season.

"I think he definitely deserves everything he's got coming to him. No one respects him more than I do," Jones said in October on the G-Bag Nation on 105.3 The Fan. "As I said, he's a warrior and he loves to play the game. One of the things I think goes unnoticed with him is not only is he a great pass rusher but he's one of the great run players as well. He's just an all-around great end for us and we're certainly glad to him."

Lawrence informed media members at the Pro Bowl that he would be having surgery on his shoulder this offseason. The pass rusher revealed earlier this season that he was dealing with a torn labrum.

Despite entering this past season playing under the franchise tag, Lawrence took it in stride.

"I’m not everybody else," Lawrence told 105.3 The Fan's Mike Fisher in May. "I'm DeMarcus. DeMarcus does what DeMarcus want to do."

Tank did just that and participated in OTAs, training camp and now games, regardless of the fact that he desired a long-term deal.

"I don’t really care," said Lawrence about playing under the franchise tag. "If I keep getting my stats and helping my team win, they won’t have a choice but to sign me.''

Stephen Jones also touched on their desire to sign Ezekiel Elliott and Dak Prescott to contract extensions when he spoke to the media Tuesday.