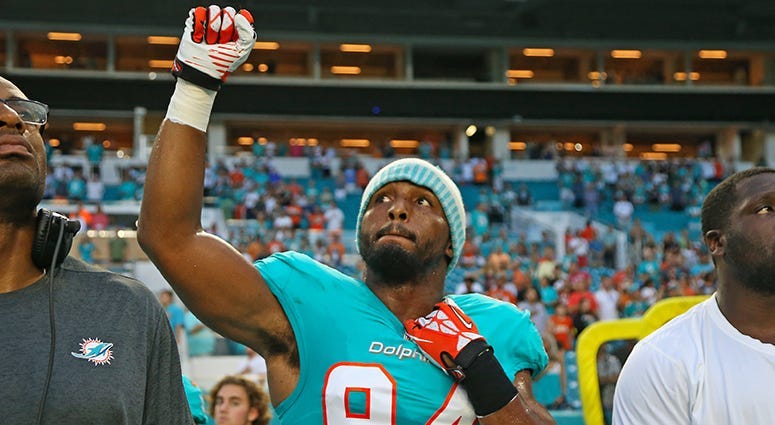 FRISCO (105.3 THE FAN) - The Dallas Cowboys have a toe-the-line policy when it comes to the pregame national anthem, believing that there are other days and other ways to call attention to social statements.

Defensive end Robert Quinn has, as a member of the Rams and Dolphins, raised his fist during the anthem to protest inequality.

Now that the two parties, and their varying viewpoints, are in this together, what will new Cowboys defensive end Quinn do?

Quinn said the issue was not discussed with the Cowboys before he and his agent worked to engineer the March 29 trade that sent a sixth-round pick in 2020 to the Dolphins, a transaction that came with a new one-year deal worth $8 million.

Since that time, Quinn indicated that the subject has come up, but “not in too much detail. It’s a personal thing, kind of leave it that.”

There are those who would continue to push Quinn on the matter, but he has a point: He's earned the right to serve as a spokesman in his own way, and even in a way that works in conjunction with what his employer wants. The two-time Pro Bowler and former NFL Defensive Player of the Year who has 69 career sacks to his credit has also earned the right -- especially as this is his first dealings with the public in a Cowboys uniform -- to pick his spots on when to talk about social issues and to pick his spots on when to talk about football. So it made perfect sense when during this visit he finally opted to steer the media conversation away from an important decision he clearly has not yet made and onto his views on the roster of the 2019 Dallas Cowboys.

“I don’t see a weakness, which is unbelievable to say,” he said with a glance around the Dallas locker room.

Quinn, very comfortable reverting back to the 4-3 scheme that isn't Miami's style but is what the Cowboys use, is the likely starter for Dallas at right defensive end, and during these OTAs, we're told, has engaged Tyron Smith in some grand battles -- battles that should be quite entertaining come training camp in Oxnard.

“It makes you more excited to come into the building,'' Quinn said. "It makes you want to work harder. You don’t want to let anyone down because of what they did last year. I believe I’m a pretty decent player. So I just want to add what I can do and help this team get even better.”