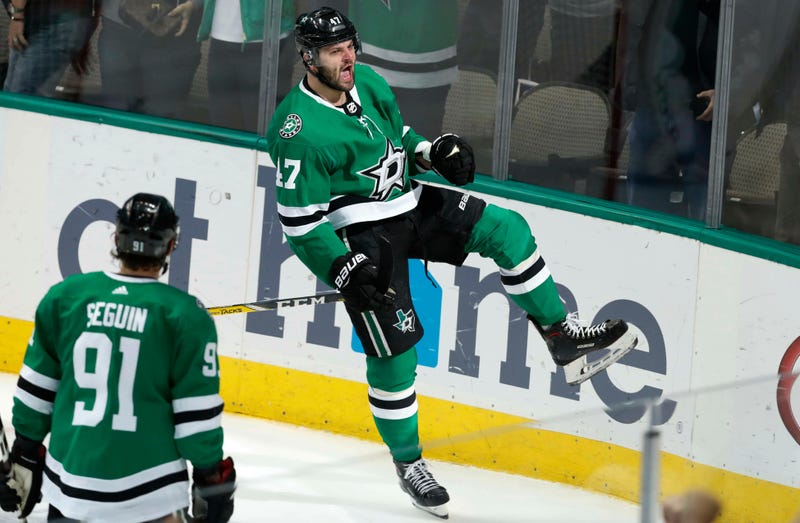 A trying season for the Dallas captain will continue in the playoffs.

The Stars clinched their first trip to the postseason in three years, getting two goals and two assists from Alexander Radulov in a 6-2 victory over the Philadelphia Flyers on Tuesday night.

"The fun stuff's going to begin next week," Benn said. "You just want a chance. We're going to do that now and have a lot of fun with it and try to get this thing going."

The Stars were just a point shy of the playoffs and could have made it with an Arizona loss in a later game.

Instead, they left little doubt with four goals in the final 24 minutes, including a pair 10 seconds apart, to secure just their third Western Conference playoff berth in 11 seasons.

Jason Dickinson, Esa Lindell, Tyler Pitlick and Blake Comeau also scored for the Stars, who hold the first wild-card spot with 91 points and are unlikely to get into the top three in the Central Division. Dallas last made the playoffs in 2016, losing a Game 7 to St. Louis in the second round.

The Stars missed the playoffs a year ago because of an eight-game losing streak late in the season, the first six of those on the road. This time, they moved to the brink of the postseason by earning seven points on a four-game Canadian swing before coming home to face Philadelphia.

It was a satisfying surge for a club that worked through a tumultuous midseason stretch after team CEO Jim Lites profanely ripped the play of Benn and Seguin, the high-priced star forwards.

The Stars actually held the last playoff spot in the West in late December when Lites used plenty of profanity along with "terrible" and "embarrassing" to describe the way both were playing while saying the team was underachieving.

First-year coach Jim Montgomery, making the rare transition from college, joined the chorus not long after Lites' strong words, saying he was trying to end the franchise's "culture of mediocrity."

Montgomery's tone was decidedly more positive after the All-Star break, when the Stars won their first four as part of a five-game winning streak and had another solid run in March to set up the decisive Canadian trip.

"We had some trials and tribulations, and it took us a while to find our identity," Montgomery said. "We thought we could be more of an offensive team when we first started the season, but that didn't materialize. And then we changed things, and we've become a real grind-it-out team that's hard to play against."

Dallas had a rare offensive outburst in the clincher, tying a season high with the six goals.

The Stars coughed up a 2-0 lead in the second on goals by Philadelphia's Oskar Lindblom and Shayne Gostisbehere. But Radulov put them in front for good late in the second when he took a pass from Seguin and lifted a backhand over Cam Talbot on the power play for his career-high 28th goal.

Pitlick, in his second game back after missing 30 with a wrist injury, redirected a pass from Roope Hintz while skating through the slot after Radulov's first goal. Dickinson and Lindell, who had a nifty redirect off his blade from between his legs , scored in the first five minutes.

"Didn't have the best start to the game, but I think for us as a whole we played pretty good in the second," Gostisbehere said. "The third, we got caught in penalties. Didn't have our best effort in the third."

Khudobin, who has played an important role as Ben Bishop's backup with the Dallas starter missing 16 games because of injuries, made 32 saves. Bishop is expected to return from his latest injury this weekend. Talbot stopped 24 shots.

NOTES: Stars F Mats Zuccarello returned after missing 17 games with a broken arm, recording an assist. Zuccarello was injured in his first game after coming over in a trade with the New York Rangers. He had a goal and an assist in that game against Chicago. ... The Flyers, already eliminated in the East playoff race, have lost five of six games. ... Radulov is on a six-game point streak, with 10 points (five goals, five assists).

Both teams have their road finales. The Flyers are in St. Louis on Thursday. The Stars visit Chicago on Friday.