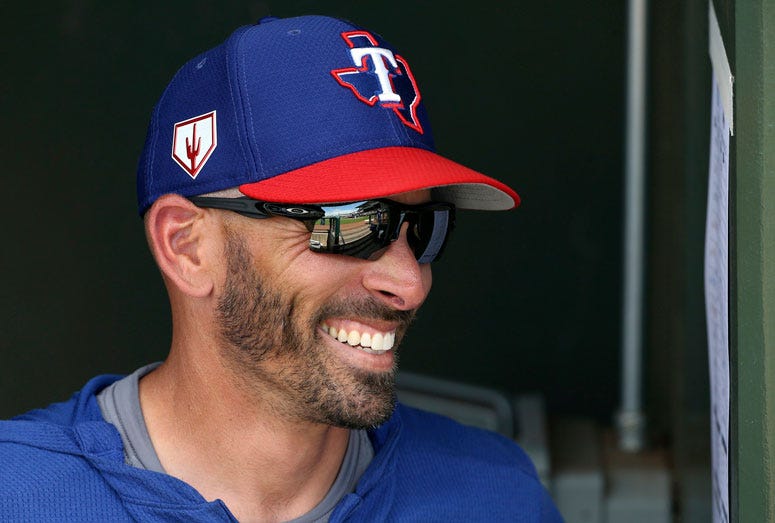 ARLINGTON, Texas (AP) — Chris Woodward loves that the expectations are higher for the Texas Rangers.

They are certainly higher than they were when the first-time manager took over a team coming off consecutive losing seasons.

"Whether that lasts and we sustain that, it's totally on us," Woodward said. "Do we have a team that we feel like can win every game? We do, and they truly believe that."

After 21 games in 20 days, the Rangers got to their first day off in three weeks Monday. The are 42-36 and have lost only one of their last 12 series since a five-game losing streak that dropped them five games under .500 in mid-May.

While three games shy of the midpoint of Woodward's first season, and still a bit early to talk about playoffs, the Rangers were only a half-game behind the American League's second wildcard.

"There's no question there's a lot of room for growth in every player in that locker room, but the overall belief is that we're going to win a game every time we step on the field," he said. "That's the start to changing the culture of, 'Hey, we're a winning organization, we're a winning team, we're going to be here for a while.'"

The Rangers open a three-game series Tuesday at Detroit, where the finale Thursday will mark the 81st game of their 162-game regular season.

Slugger Joey Gallo (.276, 17 home runs, 41 RBIs) is expected to be activated from the injured list and play in the opener for the first time since a left oblique strain on June 1. Veteran right-hander Jesse Chavez, who has been a valuable reliever, moves into a starting role — and not like other starts this season, when he pitched the first inning or so as an "opener" before another pitcher came in the game.

The Rangers will be without third baseman Asdrúbal Cabrera, who will serve a three-game suspension for throwing equipment on the field that hit an umpire after he was ejected from a game last Thursday. He initially appealed after getting a four-game suspension from Major League Baseball, but will now miss the Tigers series.

Elvis Andrus said Woodward has had a huge part in the resurgence for Texas, which went from consecutive AL West titles to a 78-85 record in 2017 and then 95 losses last season. The 30-year-old shortstop and longest-tenured Ranger in his 11th season described Woodward "a really good upgrade for the team."

Woodward spent the past three seasons as third base coach for the Los Angeles Dodgers, who went to the World Series each of the past two years. The 42-year-old manager was a utility player during 12 seasons as a big leaguer with Toronto, the New York Mets, Seattle, Atlanta and Boston, playing for 11 different managers.

"His personality goes along with our team. He feels like another player here in the clubhouse more than a manager with his presence. He communicates really well with each player. He talks to a lot of guys," Andrus said. "He knows how it feels if you're struggling, if you're doing good. So I think he's really a detail person. He's always looking around, trying to find a way to help whoever needs it. He's so positive."

Those 21 games included their first winning road trip of the season, when the Rangers split a four-game series in Boston before winning two of three at Cincinnati.

They followed that by splitting four games at home last week with the Cleveland Indians, the team a half-game ahead of them for the second wild card. Nomar Mazara then hit three homers, including one measured at 505 feet by MLB, and two doubles while the Rangers took two of three from the Chicago White Sox at home over the weekend.

If the Rangers keep doing that at the pace they have been, they could be a real surprise in September.