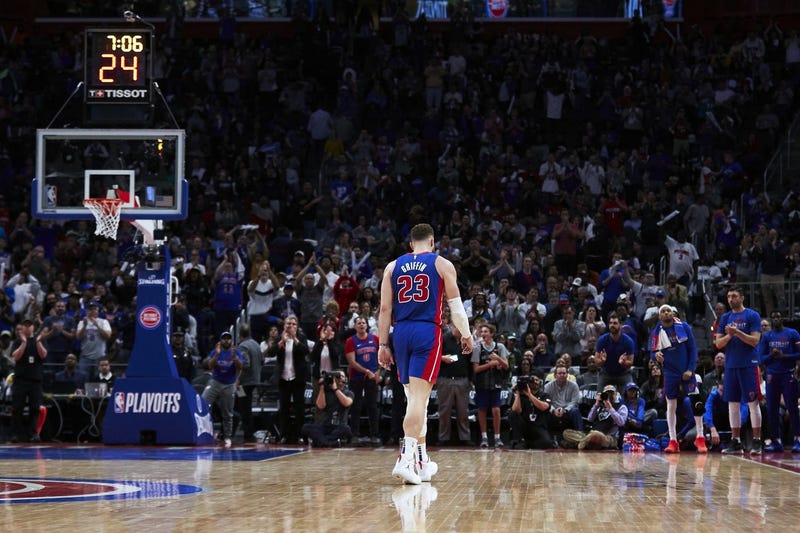 DALLAS - It's the NBA offseason, and for the Dallas Mavericks, a time to nurse the hangover of an NBA offseason that didn't go quite as planned.

But that doesn't mean we're gonna go all TMZ/Bayless on you when it comes to headline-grabbing stories.

It is, however, as Dalton Trigg writes at DallasBasketball.com, "very easy for a lot of us to become conspiracy theorists with every single social media post from players or team executives.'' To wit:This happened as recently as Thursday night, when a picture surfaced on Instagram of Mavs owner Mark Cuban and Detroit Pistons superstar Blake Griffin standing side-by-side and seeming to be having a great time together with a couple of other guys as well.

This came just a day or so after an unfamiliar twitter account started the rumor that three teams had recently talked to the Pistons about a potential Griffin trade. Maybe there are credibility issues here ... but all of this happening around the same time naturally leads people to raise an eyebrow. And if that wasn't enough to stir the pot, Griffin himself proceeded to "like'' the rumor tweet, adding to the speculation.

Griffin represents Detroit's only chance at staying relevant in the Eastern Conference right now, after becoming an All-Star for the sixth time and putting up 25 points, eight rebounds and five assists per game last season.

However, if -- and that is a huge if -- the rumor is true, and the Pistons have started fielding trade offers for Griffin, is there any feasible way the Mavs could be involved? And could the timely picture featuring both Griffin and Cuban have anything to do with it? The answer, at least to that second question, is a 'no,' as Cuban recently explained.

"It was a mutual friend's birthday party,'' Cuban tells us.

In other words, Griffin in the news and Griffin/Cuban at a party is was merely a coincidence and nothing more. By the way, just in case you were curious, that 'mutual friend' Cuban refers to is Michael Ratner, who is a Hollywood producer and director. (Ratner has produced and directed a number of films that have premiered at Sundance, Tribeca, and SXSW, and he's the man behind Netflix’s One in a Billion, which examined the globalization of the NBA into India through the lens of Mavs draftee Satnam Singh -- and there, folks, is your Kevin Bacon-esque degree of separation.)

Again, it's not really our style to go all TMZ/Bayless on you with stories like this. We'd just before to call those involved and ask them. So now you know that Cuban hanging out with Griffin at a birthday party doesn't have anything to do with a potential trade. It just has to do with rich guys at a birthday party.