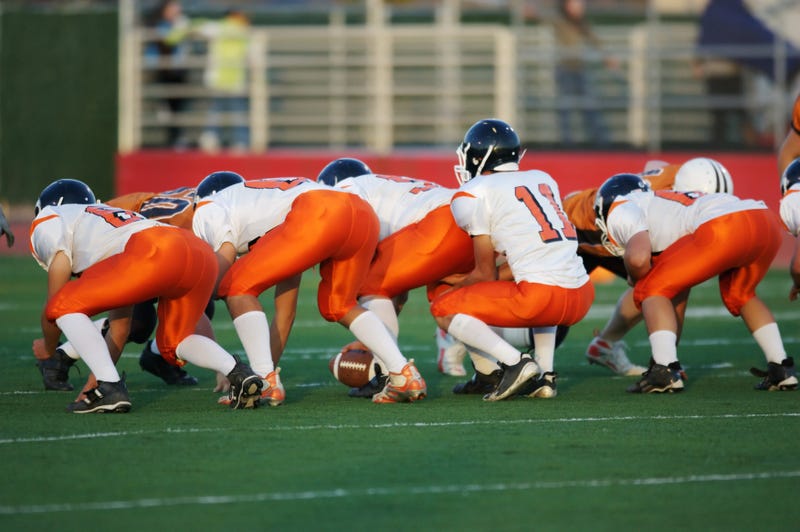 DALLAS (105.3 The Fan) - The 2019 Texas High School Football season kicks off Thursday, Aug. 30.  Here are the area's most-attractive matchups in Week One of the new season:

Permian:  Never afraid to take on powerful foes in non-district play, MOJO will make the long trip to North Texas to open the year...Permian brings back five starters from a team that went 8-4 last season...Panthers are somewhat inexperienced, will need young players to step up.

DeSoto:  Former Head Coach Claude Mathis is back to lead the Eagles program...Mathis inherits a young team in 2019...he will try to restore stability to a program that has been mired in turmoil in recent years...DeSoto welcomes eight starters back from a team that went 9-3 in 2018...Eagles are ranked No. 16 in 6A state preseason poll.

Trinity:  After making nice playoff runs in the last two seasons, the Trojans get back only three starters from the team that went 10-2 last year...Head Coach Chris Jensen says Trinity will need young talent to develop this season...Marcus Irvin takes over at QB, will oversee Trinity's always-powerful rushing attack.

Arlington:  Should be strong again, with 14 starters back from an 11-1 team that won district championship last season...spectacular athlete Jahari Rogers is moving from QB to the defensive secondary...Rogers accounted for 46 touchdowns for Colts in 2018...Arlington is ranked No. 23 in 6A state preseason poll.

Jesuit:  With 12 starters returning, they hope to bounce back from a 2-8 season in 2018...Sr. RB EJ Smith (son of Cowboys' Hall-of-Famer Emmitt) will be counted on to carry a heavy load...Smith had 17 total TD last season.

Martin:  Warriors will have a tall task in facing powerful Lake Travis squad right off the bat...Martin welcomes 13 starters back from last year's 5-6 playoff team...looking to reach the postseason for the 14th consecutive year.

Lake Travis:  Cavaliers come in ranked No. 3 in the 6A state preseason poll...they return 15 starters from a team that went 12-2 and made the 6AD1 state semis last year...Sr. QB Hudson Card (UT commit) is one of the top prospects in the USA...Card threw for 50 TDs last season and will look to hook up often with Sr. WR Kyle Eaves.

Guyer:  Wildcats are ranked No. 8 in the 6A state preseason poll...went 6-6 last season, but bring back 17 starters and the veteran team is expected to contend for a state title...Jr. QB Eli Stowers (A&M commit) is highly-touted, had 22 total TD last season...RB Kaedric Cobbs ran for 1,487 yards and 19 TD last year...6A Guyer vs. 5AD2 Aledo will give both teams an opportunity to see where they stack up early in the year.

Carroll:  Dragons bring back 11 starters from a team that went 13-1 and made a deep playoff run under HC Riley Dodge last season...will need to replace graduated RB TJ McDaniel (SMU)...DB/WR RJ Mickens is among the top players in the state of Texas...Carroll is ranked No. 10 in 6A state preseason poll.

SGP:  Returns 10 starters from a team that went 5-6, made playoffs last year.

Cedar Hill:  One heritage program visits another in the Tom Landry Classic...Longhorns have 12 starters back from a team that went 9-2 last year...looking to reload, despite losing four FBS signees to graduation...Cedar Hill is ranked No. 15 in 6A state preseason poll.

Allen:  Eagles ready to insert new faces this season, returning only six starters (one on defense) from 2018 team that went 14-1 and made the state semifinals for the seventh consecutive year...Allen is ranked No. 4 in 6A state preseason poll...track All-American Raylen Sharpe (5-8, 150) takes over at QB...veteran RB Celdon Manning ran for 1,200 yards and 16 TD last season.

Rockwall:  Yellowjackets have the distinction of being the last team to beat Highland Park - Rockwall survived 53-49 shootout in 2017 season opener...ranked No. 18 in 6A state preseason poll...Rockwall returns 12 starters from a team that went 8-3 last year...record-setting WR Jaxon Smith-Njigba (Ohio State commit) will get national attention - he had 1,820 yards receiving and 20 TD catches last season.

Highland Park:  Scots on a mission to four-peat this season in 5AD1 under legendary HC Randy Allen...HP has won 31 straight games since the loss to Rockwall in 2017 season opener...Scots open season at No. 1 in 5AD1 state poll...all-state QB Chandler Morris (Arkansas commit) threw for 4,000 yards and had 66 total TD last season...DE Prince Dorbah (UT commit) had 21 sacks last season.

This two-year home-and-home series shifts to North Texas.  The Mansfield schools hope home-field advantage will lead to a better showing after they won just one of the games played in Oklahoma last year.

Waxahachie:  With 12 starters returning, Indians hope to bounce back from a 1-9 season in 2018...WRs BJ Hawkins, Campbell Sullivan, and Josh Sterns will be counted on to give the new quarterback a lot of help...Waxahachie beat rival Ennis in the season opener last year, 54-32.

Duncanville:  After a heartbreaking loss on last-play Hail Mary pass in 6AD1 state title game, Panthers come in hungry to go all the way in 2019...Duncanville opens the season ranked No. 2 in 6A behind defending state champion Galena Park North Shore...QB Ja'Quinden Jackson (UT commit) is among the top players in the state - had 38 total TD, including 23 on the ground, last year...RB Trysten Smith ran for 1,400 yards and 23 TD...12 starters return...Duncanville defense is always ferocious.

Lancaster:  Powerful Duncanville will be a solid early test for 5A Lancaster...Tigers welcome back 14 starters from a team that went 7-4 last year...Lancaster hopes to dethrone three-time state champ Highland Park in District 6-5A-1.

Sachse:  Mustangs are a young team on both sides of the ball, with eight starters returning from last year's 8-4 squad...standout DE Anthony Anyawu is one to watch on the Sachse defense.

Horn:  Chris Hudler takes over as head coach of Jags...Horn returns 11 starters from 2018 team that went 5-8 overall, but managed to make playoffs after 0-7 start...2019 Horn squad hopes to get out of the gate more quickly.

John Tyler:  Lions look ready to make a long playoff run in 2019...JT brings back 13 starters from last year's 10-3 team that was eliminated 42-35 by Highland Park in the third round of the playoffs...Lions are always fast and physical...ranked No. 6 in 5AD1 state preseason poll.

Ryan:  Raiders are 42-3 over the past three seasons, with all three losses coming to eventual state champion Highland Park in 5AD1 semifinals...Ryan and HP could once again be on a collision course to meet in December...Ryan is ranked No. 2 in 5AD1...Raiders bring back 13 starters from last year's 14-1 team...team is loaded with talent, including QB Seth Henigan (26 TD passes), RB Emani Bailey (18 rush TD) and WR/DB Billy Bowman, Jr. (UT commit, had 8 TD catches, 5 interceptions on defense last season)...6-5 LB Drew Sanders can do a little of everything for Ryan (switched commitment from OU to Alabama).

FRISCO LONE STAR vs. RICHLAND - 7 p.m. Friday at The Star in Frisco

Lone Star:  Rangers come into 2019 ranked No. 4 in 5AD1 state preseason poll...have two talented quarterbacks in Julian Larry (33 total TD last season) and transfer Chandler Galban...WR Marvin Mims is among the best in the state at his position...13 starters are back from last year's 10-3 team that enjoyed nice playoff run.

Sherman:  Bearcats hope to break six-game losing streak against their neighbor in what is the oldest high school football rivalry in the state of Texas...Sherman-Denison series dates back to 1901, it's the annual "Battle of the Ax," and this is the 121st meeting between the two schools...Sherman returns 14 starters from last year's 4-7 team...Tate Bethel moves to QB for Bearcats, RB Miketavion Brown is backfield veteran.

Denison: Despite six consecutive wins, Denison trails Sherman in the overall series, 68-44-8...15 starters are back from last year's 6-4 team...Soph. RB Jadarian Price ran for 16 touchdowns as a freshman.

SOC:  Golden Bears come into 2019 season ranked No. 10 in 5AD2...nine starters are back from a team that went 11-1 last year...SOC is again the favorite in 6-5A-2 after going undefeated in the district last season...team is loaded with senior leadership.

Skyline:  6A school looking to make a statement against 5A foe in the season opener...Skyline brings back 15 starters from last year's 7-3 team...HC Herman Johnson is in his second year at school...again faces the daunting task of seeing Duncanville in district play.

Decatur:  Eleven starters are back from last year's Cinderella team that made playoffs with a 4-6 record, went on to reach state semifinals...ranked No. 10 in 4AD1 state preseason poll...loaded on offense, including outstanding QB Roman Fuller, who threw for 4,600 yards and 45 TD in 2018.

Kennedale:  Young team that returns only six starters from last year's 9-3 squad...still the favorites to win 6-4A-1 with their Wing-T offense...S Johnny Coffey is Kennedale's top playmaker on defense.

Stephenville:  Eight starters are back from last year's 7-4 team.

Argyle - Eagles are ranked No. 3 in 4AD1 state preseason poll, will be among favorites to win it all this year...ten starters back from last year's 13-1 team...Returners include QB Bo Hogeboom (U of Houston commit, 44 TD passes last year) and RB Tito Byce (ran for 26 TD in '18).

If you have information to share on your school, or if you would like to see a game included in an upcoming weekly preview, please e-mail christopher.sommer@entercom.com.