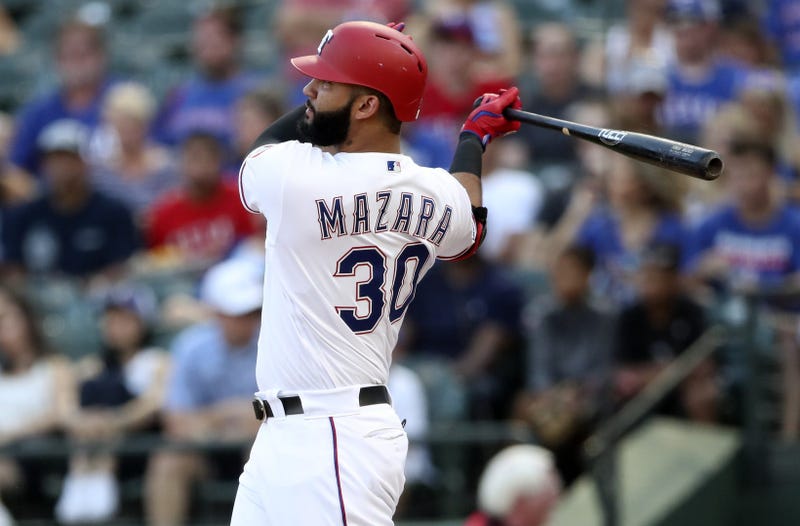 The weekend we just saw from Nomar Mazara is one of the reasons his entire career has been an enigmatic cry from both sides regarding his trade status.

The 505-foot blast on Friday night followed by two homeruns on Saturday combined with six total RBI and a.500 batting average over the weekend is the splash we sometimes get from Mazara to remind us exactly what kind of potential resides in that 6-foot-4, 24-year-old frame.

It’s also the reason that so many people have tabbed him as a tradable commodity throughout his young career.

We just don’t see it enough.

So far, he’s been the model of consistency most teams would love to see from a young player thrust into a starting role. He’s hit 20 HR’s in each of his first three years and he has 12 in 70 games so far this year. He’s averaged 81 RBI in his first three seasons and has 45 already this year, and he’s a .261 guy with a .754 OPS. The numbers show that he’s been a good to average player in his first three-and-a-half seasons.

If your team was surrounded with superstar talent, his numbers might even be that much better simply due to opportunities. However, he is one of the future cornerstones this team plans to build around, and they would love to see a sign that he is more than a 20 HR, 81 RBI, .261 guy.

Is there a glimmer of anything potentially more than Mitch Moreland without the defense?

If you look back at Moreland’s numbers over his career in Texas and even now with Boston, they pair closely.

We all look back fondly on Moreland, but he never launched into a different category than, good player.

I don’t like to give up on players too early, because What if it clicks? What if it he figures it all out and turns into the monster we all expect? More importantly, what if Jon Daniels finds a couple of other super star caliber players? Nomar would be a wonderful complimentary piece on a championship team.

At the moment, this team is exploring all options when it comes to deciding whether or not their players are tradable, valuable, more valuable to the future foundation and so much more, and there is no doubt teams around the league have one eye carefully laid upon some of their young hitters.

I don’t foresee too drastic of a drop off for the player, but the battle is figuring out just what his ceiling could possibly be.