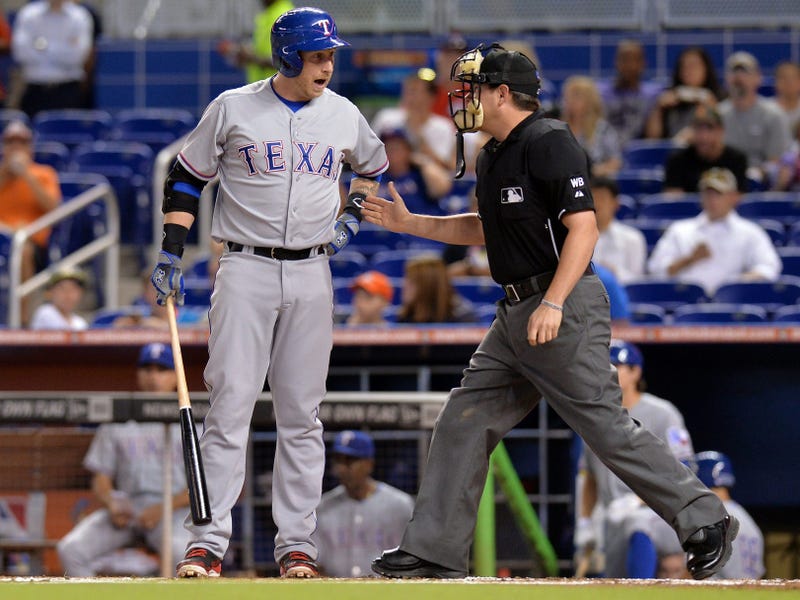 Over the last couple of weeks without sports I’ve seen a few “All-______ Teams” for various sports or particular franchises. So, I figured I’d join in with two things I love: sports and food. Since the Rangers have some pretty gnarly “food” names in their franchise’s history, I decided to do an “All-Rangers Food Team!”

When you eat a lot you can get “pudgy” so I thought long and hard about this one, but since Pudge is on almost every other notable list, why not get some seasoning involved and give “Salty” some love? I guess you could say he was the big prize of the Mark Teixeira trade even though it never panned out that way. He ended up winning a World Series in 2013 with the Red Sox.

We’ve got to have some seafood on the menu. Carp, who also won a World Series with the 2013 Red Sox, was one of the many who wore a Rangers uniform during the franchise’s record-setting injury 2014 season. The last of Carp’s 318 career big league games came with the Rangers on August 28, 2014 against Houston.

This is so fitting, really. There are so many types of fries and there are so many types of Fryes. On the “ie” side, you’ve got regular, shoestring, waffle, curly, steak, sweet potato, and other forms. On the “ye” side you’ve got the player, who played multiple positions, the agent, who used to represent Ian Kinsler, the broadcaster who has joined me for some Frisco games, and now the twitter humorist, parodying current coaching methods on hitting.

We need some red meat on the menu and Lamb does the trick. The man who hit the ball robbed by Gary Matthews Jr.’s famous catch, Lamb started his career with the Rangers playing alongside his childhood buddy, Michael Young. Lamb’s father coached both Mikes growing up in Southern California.

SS: Luis Sardinas
Honestly, there weren’t a lot of great options at this spot. I went with Sardinas because it sounds like sardines and my wife’s grandmother likes sardines. Sardinas was one of three traded by the Rangers to the Brewers in 2015 to bring Yovani Gallardo to Texas. Plus, in episode five of Tiger King, Carole Baskin made mention of “sardine oil.”
LF: Marlon Byrd

Whether you are fancy and going with quail or thinking a more basic bird like chicken, Byrd offers some menu versatility. His first 20-HR season came as a member of the Rangers in 2009. He then went on to hit 20+ four more times and got popped for PEDs a couple times, too.

What good is all of this food if you don’t have someone to Grubb? Johnny Grubb spent five seasons with the Rangers, but made a name as a 1974 All-Star playing with the Padres. With the Rangers, Grubb produced a 21-game hitting streak in 1979.

“The Candyman” provides us with some dessert. Barely a Ranger, Maldonado joined the franchise in the middle of ’95 and spent his last game in the big leagues in Rangers red. Oddly, Maldonado was a better career hitter on the road than at home by 51 points.

Maybe known more for an injury on a celebration (perhaps), Baker helps give us some skills in the kitchen. He isn’t alone back there, but a complete menu requires some baking and Jeff gives us that. It helps that Baker, whose dad was an Army Lieutenant Colonel, was born in Germany to provide us with some global flavor.

There are plenty of great things you can do with a Dutch Oven so the man responsible for the best post-season pitching performance in franchise history joins our squad. While injuries beset his trajectory, Holland is still a significant part of franchise history and one of baseball’s great guys.

I’ll make sure we have a Kosher “Butcher” and John is the guy. He played seven big league season starting off with the Rangers. He’ll handle the meats and get ‘em ready for the kitchen.

Condolences to Ed’s family as he passed away last week. He earns a spot on this team because someone’s got to do some of the tough work behind the scenes to grow the food so we have to have a Farmer. Ed pitched just 11 games with the Rangers in 1979, but still appeared in Arlington as the longtime broadcaster for the White Sox.

Shan Shariff and Gavin Dawson would be very upset if I didn’t have a Grilli to prepare the food. Jason spent part of 2017 with the Rangers and ended his career in Arlington. A 2013 All-Star with the Pirates, Grilli was a huge Pearl Jam fan and once joined Eddie Vedder on stage.

Sometimes you can have too many Cooks in the kitchen so I chose the more accomplished Dennis over Glen. A two-year Ranger in the mid-90s, Cook won a World Series with the 1997 Marlins. Prior to all of that, he was an All-Southwest Conference outfielder for the University of Texas.

Every good menu has to have a hamburger. Mark’s Major League career was brief. He pitched in 2011 with the Rangers for his only big league season. He’s played indy ball for the famous Saint Paul Saints and most recently the New Britain Bees in 2018.

If you don’t like Carp, maybe you’ll like Bass? An unsung hero on the 2015 Rangers team that won the AL West, Bass was the long reliever who ate up innings out of the pen to save a thinnish unit. His sister-in-law in country/pop star Jessie James and his brother-in-law is former NFL receiver Eric Decker.