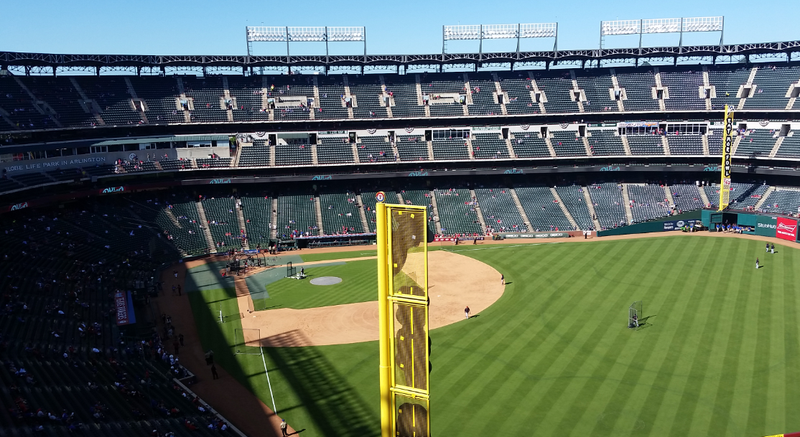 While we are missing sports in a way we never really have before, I figured I’d share some of things I miss about sports even when they return to normal in the future…

Home Whites…Since I can remember, the NFL has always had the home team rep its colors (except for teams like the Cowboys who wear the whites), but I miss the days when the NBA and NHL had its home teams wear white. Not only was there a comfort in that look, but it helped the road team really stand out. I loved seeing the different color schemes of the road teams when they’d make their rare trips to town. Now that they almost always wear white, they just blend in for the most part.

When Home Runs Mattered…There was something remarkably romantic about the 1998 home run race between McGwire and Sosa, but those moments merely punctuate one of baseball’s most exciting eras. Home runs used to be special. When a player belted a ball beyond the wall, fans celebrated with pure joy or watched with sheer amazement. Turning around a 97 mph fastball into a laser to souvenir city? Hanging back on a nasty curveball and depositing it into the second deck? Humans just can't do that sort of thing. No no...but Major League Baseball players can. Now, home runs are occurring at an all-time rate, it seems to take away the rush of energy you get when the ball leaves the yard. Growing up, I’d go to a game just hoping to see my team hit a home run…now, there are games when the moments in which the homers are hit make them just ho-hum events.
Theme Music...Nothing will ever top NBC's NBA Theme Song. Sunday afternoons...1:59...almost here...2:00...bam! It plays. Marv Albert gives his intro and his tease. Highlights encompass the screen. It takes me back to some of my earliest and most cherished basketball memories. And for everyone's sake, the Knicks were good and not some circus of a franchise (then again, Sportscenter overkill wasn't nearly as prevalent then, either). Unfortunately, ESPN's NHL Theme Song doesn't make its way around at all. Nothing like the game preview on Sportscenter with the song providing the energy as the anchor dabbled in hockey talk by acknowledging the picture of each team's marquee player on the screen. And then for games, the song's slow pacing resembled a crowd slowly rising to their feet in wonderment and appreciation of the game before them. I miss a great Gary Thorne goal-call montage with the beat in the background.
Red Wings vs. Avalanche vs. Stars (NHL)...That's the league I grew up watching: Bloody faces, remarkable saves, shock-rearing slap shots, and, the aforementioned Gary Thorne. I'm convinced the talent on these three teams was enough to take on the rest of the league...or the world. The intensity when any of these teams met made us forget about the "It's just game 36 out of 82" axiom. And when they met in the playoffs, which they did often, the intensity exploded from out of their respective venues. Seahawks games might be loud, but did they really top a playoff hockey game those very seconds after a goal was scored? No way. And there's no way a North American sporting event matches the tautness that exists in a tie game late in the third--or, better yet, in overtime--as a slap shot is blasted towards the net, screaming with the intensity and potential to create ecstasy or outrage. Or, the slow-motion intensity as a loose puck caroms to a stick with an open net beckoning his attention as defensemen scramble to obstruct his clear path for the kill, and the goalie scrambles to cover his exposed real estate. Will the puck find the red light district or will its efforts be stymied?

Following A Hooper…I’m an advocate for basketball players having the opportunity to go pro out of high school, so don’t take this the other way. When that was still allowed, you had college players staying and earning a familiarity with the national audience. You watched these guys grow and it added to the interest. I love the NBA and I love college hoops. The college product is never as good as the NBA’s, which is why the storylines are so important.

Sportscenter...I still watch the show, but I miss the crew from the show's glory days and the traditional highlight. If your team isn't very good or in a major market, good luck getting any love on the show. Even in rapid fire mode like days of old, Sportscenter fails to cover a lot of games because...well...they just don't matter. From a business side, I get it. From a nostalgic side, I resent it.
Exclusivity of Being There...I love the evolution of social media, like Twitter and Facebook, among other platforms. And there is a depth to that favorable taste, too. But, even though I like various popular songs, it doesn't mean that I can't temporarily resent how its popularity lessens its appeal for a period of time. No longer is the era when you can go to a game and then share great stories of what happened that the camera didn't capture, because social media has become that all-inclusive camera. Don't get me wrong, I love that it helps connect those who can't afford to attend the increasingly expensive sporting events, but I do miss the value of being there.
Being a Kid Who Loves Sports...As much as I can, I try and replicate this feeling. But as I have gotten older and my work helps me dig deeper and deeper into the sports world, this task becomes near impossible. I’m referring to, more than anything, the excitement behind going to a game. Most of my trips were made with my dad--making it all the more special, by the way, and for that I am thankful--and the anticipation and excitement often made even activities of enjoyment pass by with the pace of a tortoise. Finally stepping into the venue and breathing the breath of a sports fan--feeling the concourse fill up with chants and music and opinions and quiet fervor. However, no matter how tough it is to replicate the freshness of those youthful emotions, I vow to never take my unwavering passion for sports for granted. There just isn't anything greater...