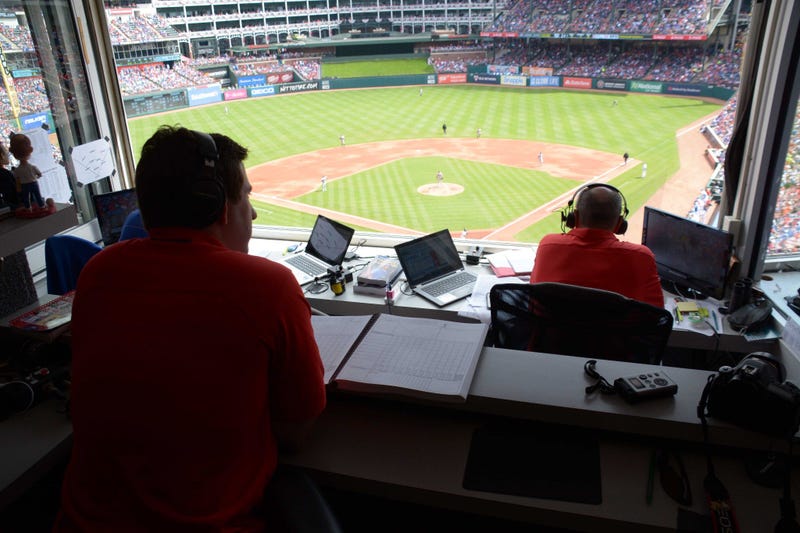 Quick story for you…

When I was in first grade I changed homerooms in the middle of the year because my teacher, the sister of a prominent non-sports media member in DFW, couldn’t handle all the questions I asked. From a young age I’ve been curious to the max and unafraid to vocalize that curiosity. I guess it makes sense that I love interviewing people. It’s certainly why I started my long-form interview podcast in which I’ve gotten to interview central figures in the sports and entertainment world and beyond. One of my responsibilities with the Rangers is to conduct a pregame interview. Often times it is a player, coach, or executive with the Rangers but at least once a series I try and interview someone on the opposing side to let fans get to know some new voices and personalities. Over the years I’ve had some really enjoyable and insightful conversations and of course I’ve I’ve had those that were just kind of “whatever” and then a rare few that are just unenjoyable.

When I interview someone with the Rangers, I’ll typically text them the night before or the morning of seeing if they’d be available and when the best time might be. I have the advantage of having pre-existing relationships with these guys, some of whom are friends. Having that camaraderie in place typically makes for a better interview for a number of reasons, trust being chief among them. These guys know me and know my intentions and it gives them a sense of comfort to provide more insightful answers.

How does it go down for an opposing player? In some circumstances I’d just say see the paragraph above for players on other teams with whom I might have those relationships. However, most of the players on the opposing side fall outside of that bucket. So I’ll usually reach out to the team’s media contact to request an interview with a particular player. Having them help coordinate ensures that a number of things, including that the interview which actually take place which, you know…is kind of important. When you’re an unknown quantity to a professional athlete, particular a baseball player who has a busy schedule every single day, they’re less inclined to help you out or follow through with an agreement. Getting stiffed doesn’t happen often but the top priority for these guys isn’t making sure they honor an agreement with the visiting radio guy for an interview. Often times, even if they don’t stiff you, you don’t have a set time and are asked to just kind of wait around until they’re done hitting or working out or film or whatever. Waiting around stinks because, while I don’t make their salary, I also have a job to do and surrendering 45 minutes of my time just standing around is less than ideal. Anyway, what might seem simple is often times not but it is still something I thoroughly enjoy.

One of my favorite interviews since I took over this role in 2015 is Trey Mancini. I was really disappointed to learn of his cancer diagnosis and immediately thought about how he’s got to be one of the kindest, most genuine and thoughtful players in the league. I look forward to our matchups against the Orioles because that means, interview or not, I’ll get to have a conversation with Trey. So, in his honor, I figured I’d share some of my favorite interview subjects/conversations among those players who either don’t play or haven’t played for the Rangers or with whom I was without a relationship before our first interview. That’s to say, essentially, players to whom I am totally irrelevant.

I first interviewed Trey in 2017. He’s a super interesting person. Growing up in Florida, he was a big time tennis player. He then went to Notre Dame and is super passionate about his time there. He gave interesting answers to questions I asked and after our first interview, I wanted to ask him more about tennis and we ended up speaking for about 20 minutes about tennis, Notre Dame, the NFL, and more. It was nice to feel like a human talking to another human and not some foreign media guy. The next year I asked to speak to Trey again—typically I’ll mix it up but the Orioles roster was pretty bare—and when I saw him he came up and asked how I was doing and followed up on some stuff we discussed a year prior. There are certain guys who treat media members as just that—and I totally understand it. But there are others who see you as a person and treat you like a person. Trey carries that out as much as anyone.

I love researching guys and asking them questions they don’t get asked often. As a matter of fact, hearing them say on-air or off, “man, no one has ever asked me that before” is a huge compliment. Even though these conversations are usually just five minutes on the pregame show, I put in work to come up with the best questions during that short time. Sometimes that means reaching out to folks and asking them about the player or seeking some guidance. A member of the Royals organization was raving about Hosmer a day before I was set to interview him and, not even with the intent of giving me interview juice, jokingly showed me a picture of Hosmer as a kid overweight and almost unrecognizable. I’m not someone who ever makes fun of obesity or looks or anything but the present day Eric Hosmer is in about as good a shape as can be and based on what I’ve gathered considered incredibly good looking. So, I didn’t feel bad asking the following question…I was genuinely curious if there was a story behind that and the transformation of his body. And, it turned out, there was. He shared a great story about how his mom really pushed him to live a healthier lifestyle and how she deserves credit for his development because of that.

What I love about Eric is his willingness to just have fun and not take himself too seriously. While I probably could have easily referred to Eric as overweight or some other more plain phrase, my question instead went more or less like this: “So, you now appear to be in great shape but I saw a picture and that wasn’t always the case. Did you make a focused effort to improve your body after, for lack of a better phrase, being a fat kid?” With Mike Moustakas five feet away, both he and Eric busted out laughing. I knew this was either awesome or horrible. Eric went on to give the answer I shared above and then after the interview I immediately apologized if that offended him. He instead gave me a high five and told me that was the best question he’s ever been asked. Later that night, I got the “come hither” finger wag from the great Mike Cummings, one of Kansas City’s media reps. Oh no…I’m toast. I was worried I was about to get scolded for asking that—even though the player liked it you never know how media reps will react. Instead, Mike told me Moustakas kept telling people about the interview and a number of the player and coaches wanted a copy.

I thanked Eric the very next day but went over a year before seeing him again. After that season he signed with the Padres. Fortunately, we played the Padres that year and, of course, I wanted to talk with Hosmer. Their media guy went up to him and asked if he had time. Hosmer was in the process of declining when he turned around and saw that is was me for whom they were asking and he changed his answer and said, “Absolutely! This guy is the man.” I felt great. He then apologized for not remembering my name, but was so gracious with his time and now whenever we see each other he stops to talk and will always give me an interview. He’s a perfect example of someone not afraid to have some fun and totally comfortable in his own skin!

I’d long been intrigued by Cole who was at UCLA while I was at USC. We actually always hit Cole really well who hadn’t yet fully transitioned from thrower to pitcher. Trevor Bauer actually gave us fits. With that said, it was clear Cole was special. I was made aware of his work ethic and his intellect while we were in school and appreciated that he wasn’t afraid to challenge precedent in search of something better. When he went to the Astros it gave me an opportunity to interview him. His personality, however, was a but of mystery—depended on the day, type of thing—so I was a little nervous. I asked Astros broadcaster and former pitcher Steve Sparks about Cole and he told me he is really smart and just doesn’t really have much interest in conversations that are boring or dumb or uninteresting. When interviewed, he doesn’t respond well to generic questions, but gives great answers if you ask him questions with some level of research or thought. I took it as a challenge to come very prepared with specific questions demonstrating that I put in some effort. I remember asking about his change in pitch usage and sequencing and just some of his philosophies. What happened next was awesome. He gave some really interesting, novel, and well thought out answers. We were sitting in the dugout by ourselves and after I turned the recorder off we spent the next 30 minutes discussing pitching and our shared time at USC/UCLA. I remember asking him off air about going to UCLA over USC despite growing up a USC fan and he said, much to my amazement, USC didn’t recruit him because they assumed he was going to sign out of a high school as a first round pick. Well, despite the Yankees taking him in the first round he didn’t sign and when I asked him about that, he told me he underwent his own financial analysis with the help of his dad assessing expected value of each decision. It was just a glimpse into how meticulous he is and how he is wired. Now he makes sure to make time for an interview so long as he doesn’t start the middle game of a three-game series in which the timing just won’t work out with his routine.

I don’t know that I’d put him on this list if it weren’t for fortuitous timing. Machado isn’t necessarily known as the best with the media but if you recall, the Orioles were in town when Adrian Beltre reached 3,000 hits. I asked the Orioles if they can assist with a Machado interview to discuss Beltre and the achievement. It wasn’t the run-of-the-mill conversation and I think he probably enjoyed that. Machado gave some awesome answers about what Beltre meant to him and his desire to see Beltre get 3,000 while the Orioles were in town. I really appreciated the passion with which he spoke and I think because of the timing it was just a memorable conversation for me. The next year we went to Baltimore right before the All-Star Break. Machado was right in the middle of trade rumors and was days away from getting dealt to the Dodgers. I wasn’t going to bug him. As I stood in their clubhouse waiting to interview Jonathan Schoop, Machado whistled me over to follow up on our conversation from the year prior. He remembered he told me that he wouldn’t be upset if Beltre hit the ball down the third base line…alas, Beltre did, so we had a laugh about that.