Alabama took home the National Championship on Monday night with a blowout win over Ohio State, 52-24. Let’s not harp on the past though and look towards next season. DraftKings Sportsbook already posted odds for the 2021-2022 National Championship with Alabama opening as the +300 favorite to repeat. 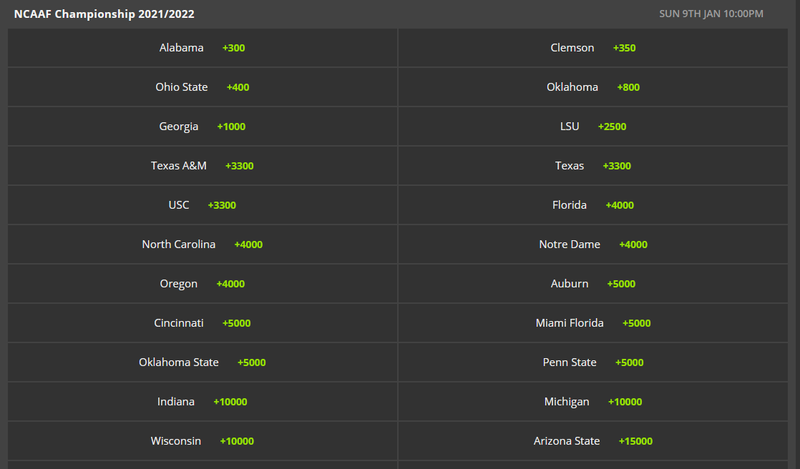 Nick Saban’s team is the co-betting favorite to repeat as champions. Even though the Tide will lose their three headed offensive attack in Heisman winner DeVonta Smith, quarterback Mac Jones, and running back Najee Harris, Alabama will be in the mix once again.

Bama will likely be turning to five star recruit, quarterback Bryce Young to man the offense, which will still have talent all over with running back Brian Robinson Jr. and wide receiver John Metchie III returning to Tuscaloosa.

On defense, it’s unknown who will declare for the NFL Draft, but the unit should continue an upward trend. With youth and depth across the position groups, led by linebacker Christian Harris, this defense should be in great shape next season.

On top of that, Saban reeled in the No. 1 recruiting class for this coming season, per 247 Sports. Don’t rule out back-to-back titles for the Tide.

Looking to bet the NFL Playoffs? The BetQL model picks the side and total of every NFL Playoff game. Sign up with BetQL today and become a better bettor!

Could this be the season Georgia gets over the hump? The Bulldogs bring back a host of key contributors on both sides of the ball, but namely on offense. Highlighted by wide receiver George Pickens, Kirby Smart’s offense should be better than the past few years with a full season of emerging star J.T. Daniels under center.

Daniels took over for the final four games of the seasons and the returns were impressive. He passed for over 300 yards per game and had a 10/2 touchdown-to-interception ratio. Georgia averaged over 37 points per game with Daniels at QB, up from 29 without him.

The key to this bet is going to be the September 4th showdown with Clemson (+300). The winner of that game will set the tone for the entire College Football season. While Dabo Swinney is replacing the likes of Trevor Lawrence and Travis Etienne, former five star quarterback D.J. Uiagalelei will have Clemson in the title hunt, one loss or not.

Neither team will have a large margin for error, but with it being so early, both title contenders can battle back with a loss. However, Georgia at 10-1 seems enticing for an early investment with its returning pieces.

Typically it's a fool's errand to bet on longshots to win the College Football Playoff. The selection process is subjective to an extent and it is dominated by teams with the shortest odds year after year. However, Oregon has a clear path to the top four.

It starts with a trip to Columbus to face Ohio State on September 11. If Oregon is able to knock off a retooling Buckeyes team on the road, it will emerge as an early favorite to make the College Football Playoff.

Oregon was one of the youngest teams in the country this season with more than 73% of its roster consisting of underclassmen. However, through some scheduling changes, the Ducks were able to win the Pac-12 title. Oregon should be much-improved next season and with an upset win over Ohio State, the Ducks’ title odds would shorten dramatically.

The Pac-12 conference should run through Eugene in 2021 and the early odds have the Ducks way undervalued at 40-1.