Tom Brady did things in 2020-21 that few quarterbacks could dream of doing at their athletic peaks... and he did it at 43 years old. But the NFL isn't the only league that has seen remarkable feats achieved by the elders of the game.

Take Denton True Young, for instance. Never heard of him? Yes, you have. He was born in 1867 and enjoyed a highly successful MLB run. So by the time 1907 came around, you'd figure that his career would be on its last legs. And that's fair to say — he only pitched until 1911 before calling it quits.

But he's the namesake for the Cy Young Award for a reason, and one of those reasons is just how long he remained dominant. His 1.93 ERA in 1892, at age 25, led the league. His 1.62 ERA in 1901, at age 34, became his career best and stayed that way for quite some time. But at age 41, Young turned back the clock and completely stymied opponents, recording an incredible 1.26 ERA in 33 starts, 30 of which were complete games and 21 of which were wins.

His age-40 season, one year prior, wasn't too shabby either. Young went 21-15 with a 1.99 ERA. Overall, Young's post-40 ERA was 2.14, tops among all pitchers in league history, and more than one of those seasons could easily appear on this list.

But we're also talking about a completely different era of pitching here, in which there could be several candidates to appear on this list (as you'll see below). For that reason, I've decided to limit our pool of eligibility for this article to seasons that occurred in the past 60 years. However, it wouldn't be right not to acknowledge some of the incredible seasons that were achieved by players who should have been way past their prime at their respective ages.

The only other rule I've established is that I'm only going to allow one season per player, but outside of that, everyone is eligible. 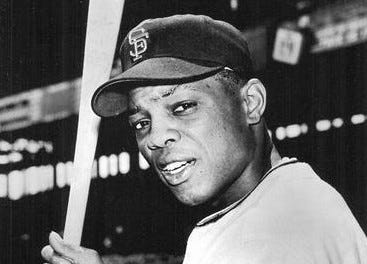 Willie Mays was a star for the Giants for several years. Photo credit (Manny's Baseball Land via tradingcarddb.com/Wikimedia Commons)

The Say Hey Kid picked up All-Star nods in all three years of his post-40 career, and though the last two may have been more out of respect for his legacy than anything else, the first was well-deserved. He led the league in both walks and on-base percentage, and he wasn't using any exterior means to help him achieve that success (like someone else on this list). The wily veteran had never drawn more than 100 walks in his career, nor had he ever recorded such a high on-base percentage.

But those weren't the only impressive stats he compiled throughout the year. He started the season with a home run in each of the first four games, which had never been accomplished to that point. At the All-Star break, he was batting .290 and was on pace for a 20-20 season and around 100 runs scored. Though his production eventually tapered off, it was still a season to remember, and one that most 40-year-olds can only dream of.

Even President Richard Nixon approved, saying that Mays was "proof that people over the age of 30 could be trusted," (via SABR). 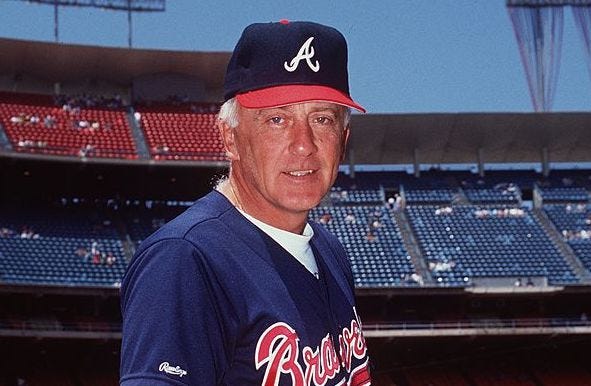 There's a lot to choose from here, considering Niekro pitched more innings — way more innings — than any other pitcher in MLB history after the age of 40. We could have gone with, say, his 17-4 season in 1982 at age 43, which was good for the league's best winning percentage and placed him in the top five in Cy Young voting. His 16-8 1984 campaign at age 45 was pretty impressive, too, considering his 3.09 ERA was the lowest it had been since the 1970s.

But the fact that he was not only a very good pitcher at age 40, but apparently the most durable as well — he led the league in games started, complete games, innings pitched, batters faced and wins (and losses) — is something to consider. That's what happens when you master the art of the knuckleball. 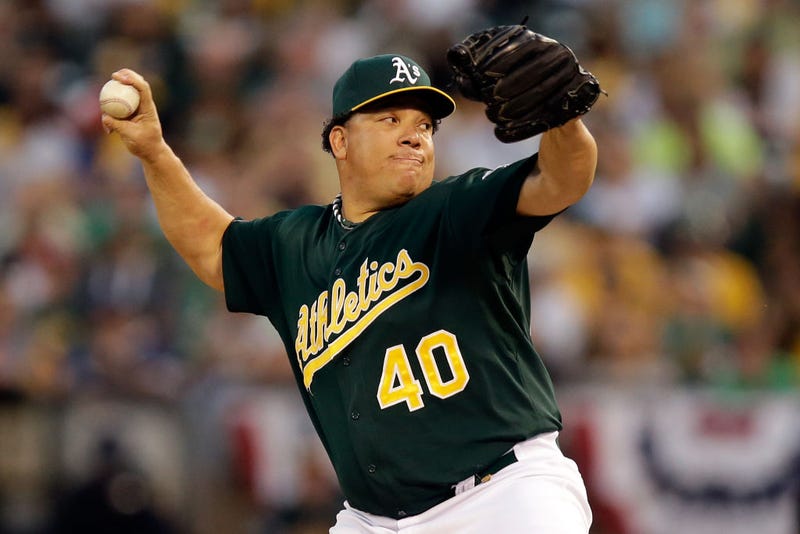 Colon tested positive for testosterone the year prior, but he dealt with his punishment and came back (ironically) stronger than ever in 2013. His Athletics finished in first place in the AL West with a 96-66 record, and he finished sixth in the Cy Young vote ahead of stars like Felix Hernandez. 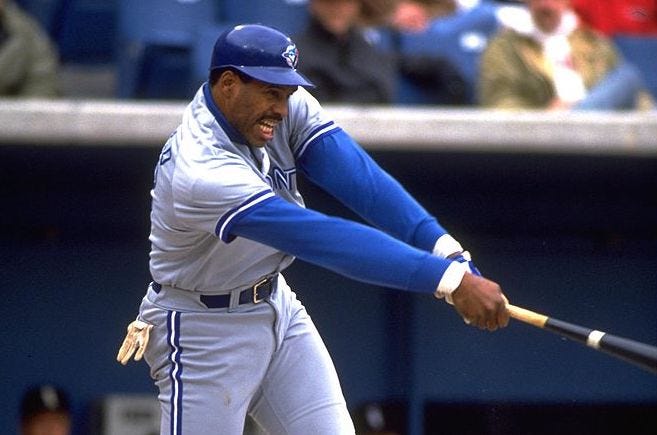 Consistency was the name of the game for Hall of Fame outfielder Dave Winfield. It didn't matter if he was playing on the East Coast with the Yankees or on the West Coast with the Padres or Angels — or, for the season in question, north of the border with the Blue Jays. There are only four players in history with as many seasons of at least 15 home runs and 75 RBI as Dave Winfield — Eddie Murray, Hank Aaron, Albert Pujols, and Mel Ott — but Winfield's post-40 days were far superior to theirs.

He is tied with Barry Bonds for the third most post-40 home runs of any player with 59, trailing only Carlton Fisk and Darrell Evans. He is one of only four players with a 100-RBI season after age 40, joining Harold Baines, Cap Anson and another player on this list. 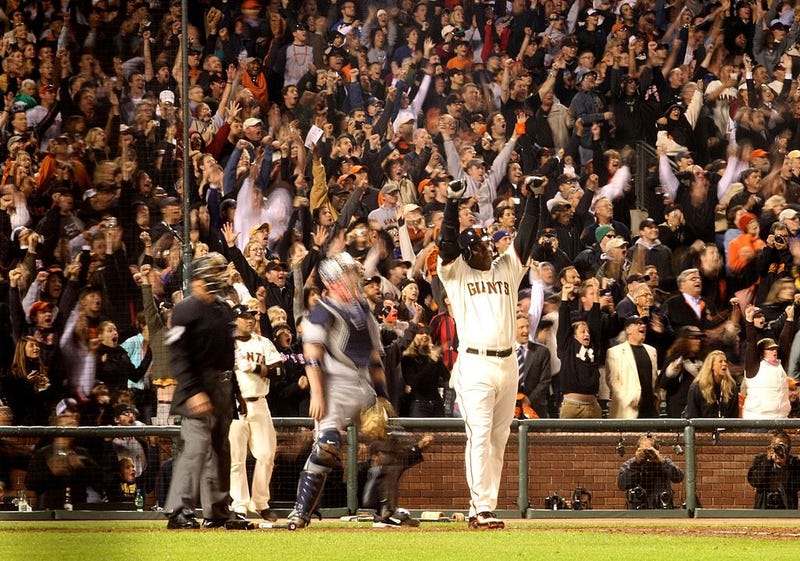 The only reason that this remarkable stat line isn't higher up is that it's not as much a testament to Barry Bonds being really, really good as it is a testament to his reputation around the league at that point. He was 42 years old, and he was still intentionally walked more than his age. A .480 on-base percentage is just ridiculous, as is a 1.045 OPS for a player that should have been a shell of his former self. Sure, he had some help achieving that physical status at that point of his career, but the numbers tell the tale. We'll let the fact that he may not get into Cooperstown be the ultimate punishment for that aspect of his career, and instead award him with a spot on this list.

And, besides, breaking the home run record is a pretty big achievement, no matter the age at which you do so.

Bonds' 59 home runs after turning 40 is the third most of any player, tied with Winfield. 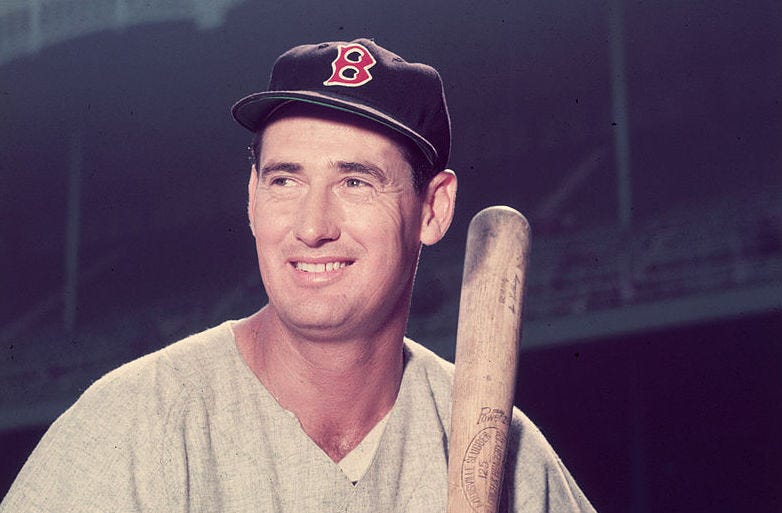 But Teddy Ballgame had one more trick up his sleeve, bouncing back at age 41. No one has ever recorded a higher OPS than Williams' 1.096 after turning 40 years old (min. 350 PA). It was the 18th season that Williams has gone over 1.000 OPS, which is also a Major League record which stands to this day. Barry Bonds is in second, with three fewer such years. 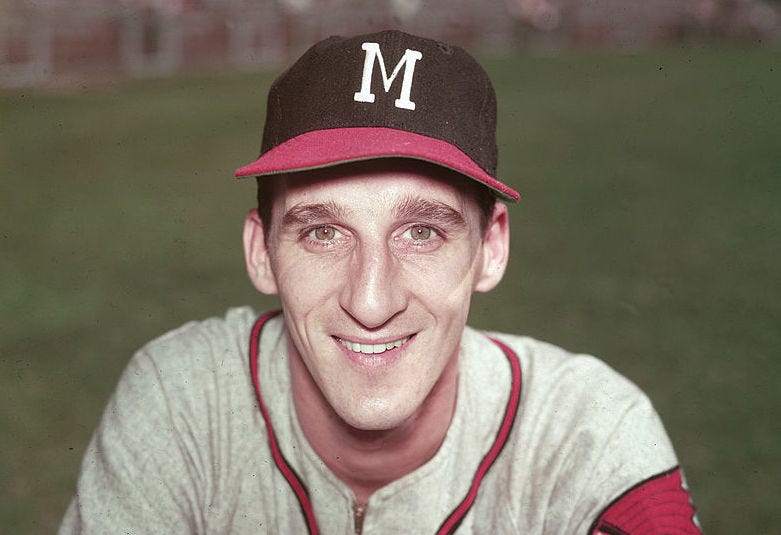 Somehow, he topped it two years later. Seven shutouts tied his career high — the other two seasons he tallied this number, he led the majors — his 2.60 ERA was the lowest it had been in a decade, his 22 complete games led baseball for the seventh consecutive season, and it was the final year of dominance before a sharp decline took hold. Spahn is one of six pitchers with 75 wins after age 40. 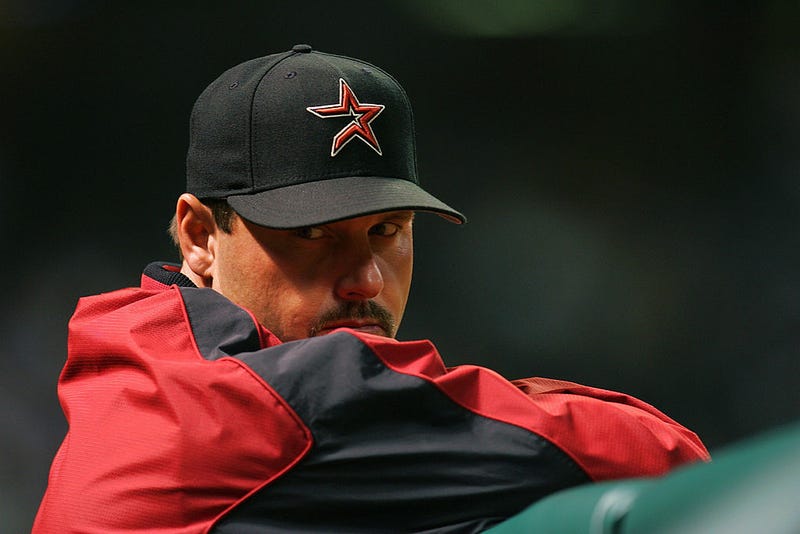 The seventh of Clemens' seven Cy Young Awards came in 2004, when Clemens was 41 years old. It was well-deserved, considering he had a league-high winning percentage after going 18-4, and he polished it off with yet another 200-strikeout campaign. 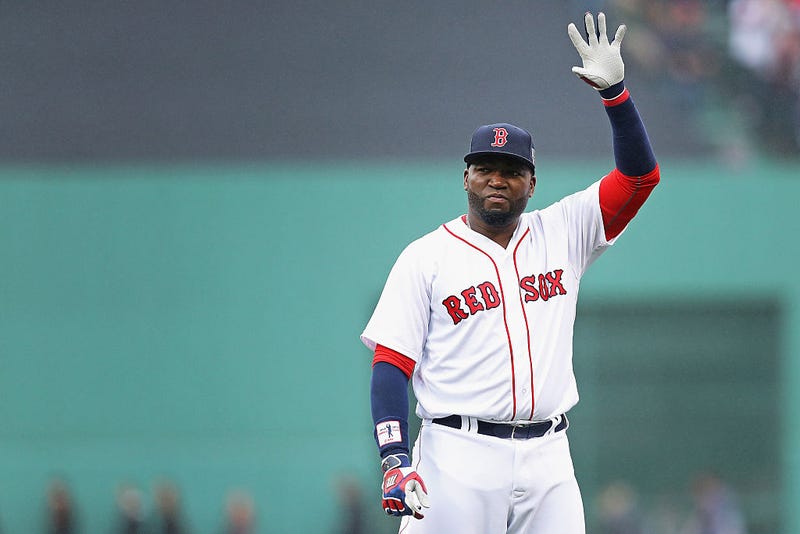 Big Papi went out with a bang. To lead the league in RBI, slugging percentage and OPS in the same season is impressive at any age, but to do it at age 40 and in the final year of a storied career is about as good a way to call it a day as there is.

Strangely enough, it was the first time in Ortiz's career that he led the league in slugging and OPS, and he also received a bit of the Bonds treatment by leading the majors in intentional walks for the second year in a row.

On top of all this, no player has ever hit more home runs or driven in more runs in their final season than Ortiz in 2016. 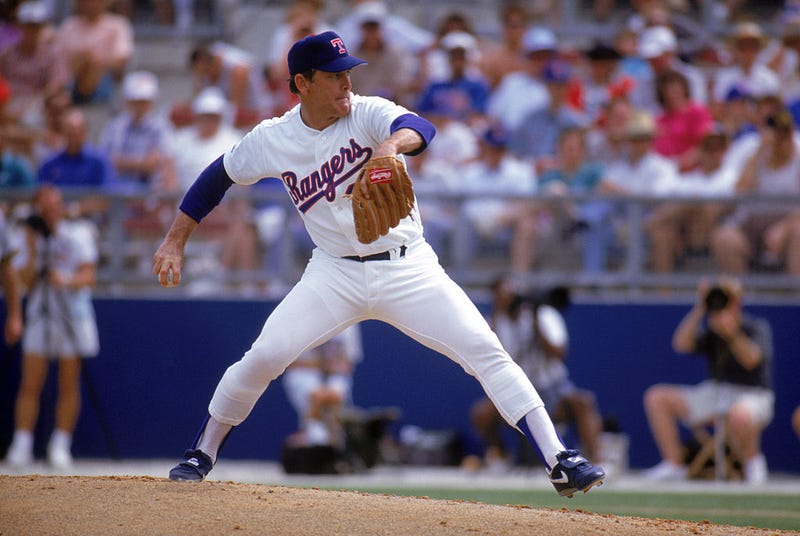 Nolan Ryan struck out more than 300 batters with the Rangers in 1989. Photo credit (Jonathan Daniel/Getty Images)

But come on. 300 strikeouts at age 42? That's absurd. And considering strikeout number 5,000 came during this campaign, this season is the one to go with for many reasons.

#OnThisDay in 1989, Nolan Ryan became the first and only man to reach 5000 strikeouts 👏 pic.twitter.com/SighiR0fwL 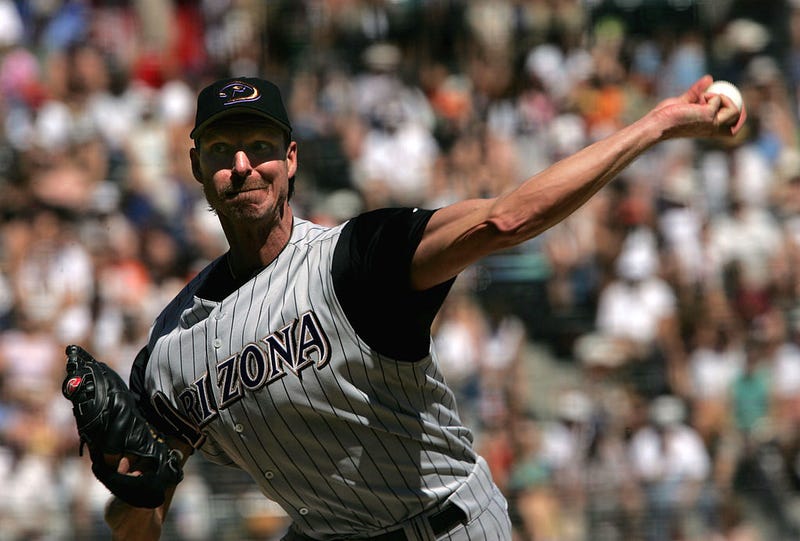 The only pitchers with 1,000 strikeouts after age 40 are Nolan Ryan, Phil Niekro and the gargantuan 6-foot-10 presence pictured above. The way in which the Big Unit started that period of his career couldn't have gotten off to a better note, as he finished with his fifth 290-strikeout season in the last six seasons. And while Ryan and Niekro were pitching in a friendlier era for pitchers, Johnson achieved these numbers during the steroid era.

He lost in the Cy Young vote to Roger Clemens, who was 41 years old at the time, though Johnson's WAR (8.4) was significantly higher than Clemens' (5.4) and the rest of the field in the National League. But now, Johnson sits comfortably and deservedly in the Hall of Fame, while Clemens is on the outside looking in.