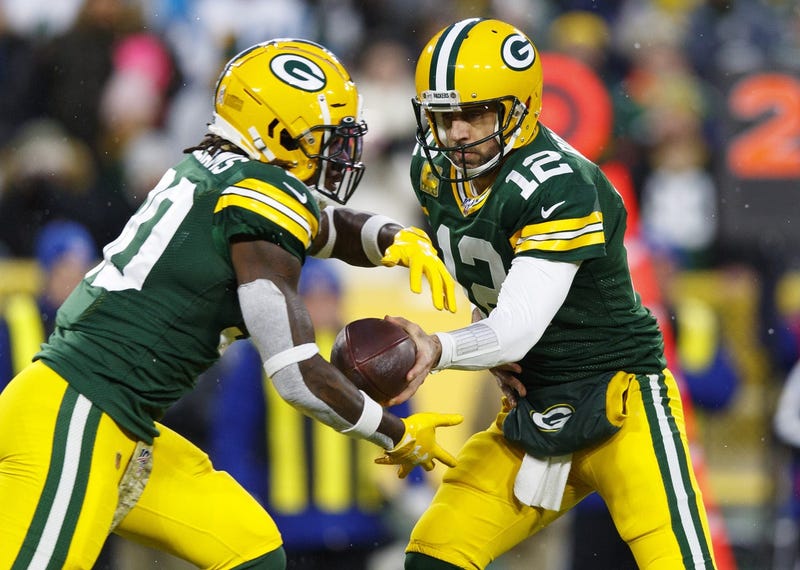 GREEN BAY-- The Green Bay Packers were victorious in an important bout with the Carolina Panthers on Sunday. The Packers won 24-16 after holding off the Panthers on the one-yard line as time expired.

After trading punts to start the game, Carolina opened up the scoring after they moved the ball into the redzone with a 38-yard completion from Kyle Allen to D.J. Moore with broken coverage by Kevin King on a drag route. A few plays later, the Panthers punched it in on a 2-yard pass to Curtis Samuel in the flat putting Carolina on the board first.

The Packers responded right away with a successful drive of their own as Aaron Rodgers completed passes of more than 10 yards to Jake Kumerow, Allen Lazard, and Davante Adams. On 1st and goal from the 5 yard line, Aaron Jones pushed his way through the pile and scored on the ground. It was the ninth touchdown of the season for Jones, a career-high for the young runningback.

Carolina would close out the first quarter going 8-plays, 43-yards and hitting a 50-yard field goal kicked by Joey Slye as soon as the second quarter opened. The Panthers would take a 10-7 lead with plenty of time remaining in the half.

After a quick punt from Green Bay, the Packers defense stepped up and forced a turnover as Montravius Adams picked up a fumbled snap by Kyle Allen.

Green Bay came out with another attempt to put more points on the board and they acted quickly. Rodgers threw a beautiful pass down the field to Davante Adams who made a spectacular diving catch for a 37-yard completion.

A couple of plays later, Aaron Jones would score his second touchdown of the game as he jumped over the pile, was held short, and then put his nose down and pushed himself into the endzone for six. The Packers would take a 14-10 lead halfway through the second quarter.

Green Bay's defense did its job once again as the Panthers drove the ball down the field and just outside of field goal range on the Packers side of the field. Then, Preston Smith broke free and sacked Kyle Allen forcing a fourth down and a punt for Carolina.

On third down of the ensuing drive, Aaron Rodgers was under pressure and was forced to throw it at the feet of Marquez-Valdez Scantling to avoid taking a safety. He took a big hit by Gerald McCoy which was called for a roughing the passer penatly, giving Green Bay new life on the drive. The next play, Rodgers took advantage with a 48-yard pass to Jimmy Graham:

The Packers moved the ball into the redzone, and Rodgers completed a pass to Jimmy Graham for a touchdown, but it was called back because Graham didn't get both feet down. Rodgers threw three straight incompletions inside the 10 yard line, but the final pass of the half was brought to the 1 yard line after a defensive pass intereference call in the endzone by the Panthers. Matt LaFleur would keep his offense on the field and go for the touchdown with two seconds remaining in the half. It was a run up the gut by Jamaal Williams that was kept short by Gerald McCoy who tackled Willaims in the backfield.

The Packers would still go into the half with a 14-10 lead and possession out of the break.

They wasted no time coming out of the locker room red hot to start the second half of the game. After Rodgers was sacked on the opening play, he hit Adams for a 38-yard completion out of his own endzone. Then, Jones carried the ball for a huge 28-yard gain on the right side of the field. Now inside the redzone, Jones would get the ball again and reach the promise land for the third time in the game.

That's @Showtyme_33's 2nd game this season with 3+ rushing TDs!The last #Packers player to accomplish that feat was Jim Taylor in 1962. Taylor had three such games that season.#CARvsGB | #GoPackGo pic.twitter.com/jUM8LjzMK9

It was Jones' third game this season where he has surpassed three rushing touchdowns.

The Packers defense took the field again, and the Panthers knew they had to do something to keep this game within their grasps now down two possessions at Lambeau. They had a great drive going down the field of 10-plays, and 81-yards, and the Green Bay defense looked a bit vulnerable. That all changed when Allen threw a ball into the endzone in double coverage. It was tipped by Adrian Amos, and then intercepted by veteran corner Tramon Williams.

The offense marched back onto the field and drove the football into Panthers territory by running the ball right up the gut play after play. Eventually, the Panthers defense held them short of the redzone, and the Packers settled for three points after Mason Crosby missed a field goal, but the Panthers lined up over the center, and a penalty flag was thrown. Crosby would get a second chance, five yards closer, and he would hit it giving the Packers a two touchdown advantage, 24-10.

Desperate times called for desperate measures for the Panthers, and it paid off. Allen was 4-5 on the next drive accruing 64 passing yards on a 10-play, 82-yard dive by Carolina's offense. Then, McCaffrey punched it in cutting the lead to eight points as the Panthers failed on a two-point conversion attempt.

Green Bay came out flat on their next possession and traded punts with the Panthers as Rodgers and the offense took it back over with under 4:30 to play. They inexplicably threw an incomplete pass and the Panthers would force a punt and take over before the two-minute warning.

The Panthers would slowly but surely move the ball down the football field as Allen completed a lot of short passes towards the sideline that stopped the clock. They moved the ball all the way inside the 25 yard line as Allen threw three straight incompletions and the Packers defense forced a 4th and 10.

Allen found D.J. Moore on a comeback route near the sideline as the Panthers picked up the first down. Another completion to Moore moved Carolina inside the 10 yard line with under 20 seconds to go. Another couple of incompletions forced 4th and 1. Preston Smith was called offsides giving the Panthers another chance following an incompletion by Allen to McCaffrey.

Ron Rivera decided to put the ball in the hands of his best player with only a yard or two to go on the goal line. McCaffery was held short by the Packers' defense and Green Bay would win the football game 24-16.

The Panthers totaled 401 yards with Kyle Allen throwing for 307 and a touchdown. McCaffrey had 20 carries for 108 yards and a touchdown and D.J. Moore had 9 receptions for 120 yards.

Rodgers finished 17 for 26 with 233 yards, but no touchdowns. Meanwhile, Aaron Jones ran for three touchdowns and 93 rushing yards. Jamaal Williams tallied another 63 yards as the team totaled 163 rushing yards on 27 attempts. Davante Adams also had a big game with 7 receptions for 118 yards. Overall, the Packers accumulated 388 yards.

Green Bay heads into a bye week at 8-2 and will remain atop of the NFC North with only six games remaining in the regular season.