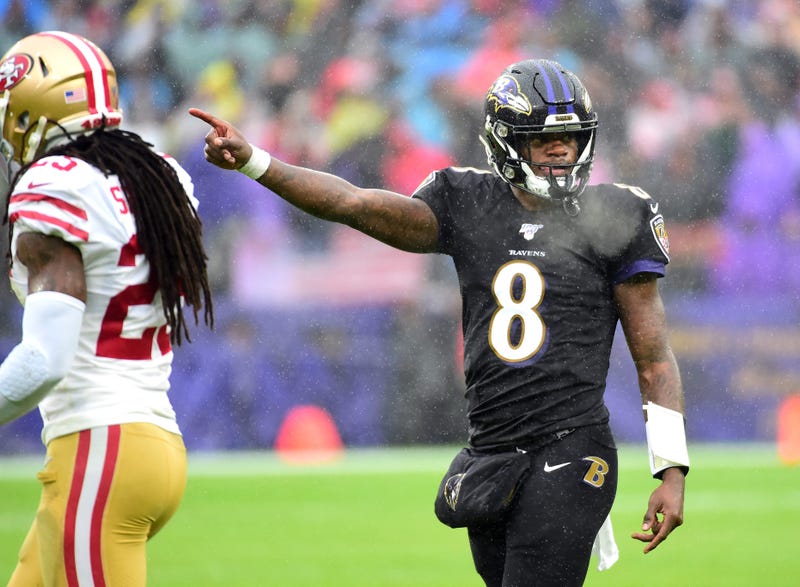 After the Ravens 20-17 victory over the 49ers, controversy struck on a 49ers broadcast.

According to the San Francisco Chronicle's Matthias Gafni and Lauren Hernandez, the 49ers have suspended radio analyst Tim Ryan for one game after making racist comments about Ravens quarterback Lamar Jackson.

49ers have suspended radio color analyst Tim Ryan over controversial comments made about Lamar Jackson on Monday. Ryan said Jackson was successful at faking handoffs because of his “dark skin with a dark football,” per @sfchronicle pic.twitter.com/KZJAg7BduK

Ryan points out that Jackson's deception with the football was impacted by Jackson's "dark-skin color."

The NSFW comments made by Ryan can be heard in the clip below and the 49ers have rightfully took action.

Snippet of Tim Ryan’s comments RE: Lamar Jackson’s “dark skin with a dark football with a dark uniform... you could not see that thing” via KNBR. He has since been suspended by the team pic.twitter.com/vpRI3veoXK

The 49ers released a statement after the suspension was announced.

"We hold Tim to a high standard as a representative of our organization and he must be more thoughtful with his words," the team said. "Tim has expressed remorse in a public statement and has also done so with us privately. We know Tim as a man of high integrity and are confident he will grow and learn from this experience.”

Ryan responded to the San Francisco Chronicle apologizing to Jackson and anyone offended by the comments.

"I regret my choice of words in trying to describe the conditions of the game. Lamar Jackson is an MVP-caliber player and I respect him greatly. I want to sincerely apologize to him and anyone else I offended."

Ryan, a former player for the Chicago Bears, was hired by the 49ers in 2014. He will be suspended when the 49ers take on the Saints this week and resume in Week 15 against Atlanta.

The comments made by Ryan were undoubtedly unacceptable and it will be worth noting any response from Jackson and the Ravens.

Jackson tallied 206 all-purpose yards and two total touchdowns in the win. Jackson's amazing season has led the Ravens to the #1 seed in the AFC as of Week 14. He has ran for 977 yards and is just 62 yards away from breaking Michael Vick's rushing record set in 2006.

With 32 total touchdowns in just 12 games, Jackson is considered an MVP favorite and will look to continue his steller play this Sunday in Buffalo to take on the Bills (9-3).