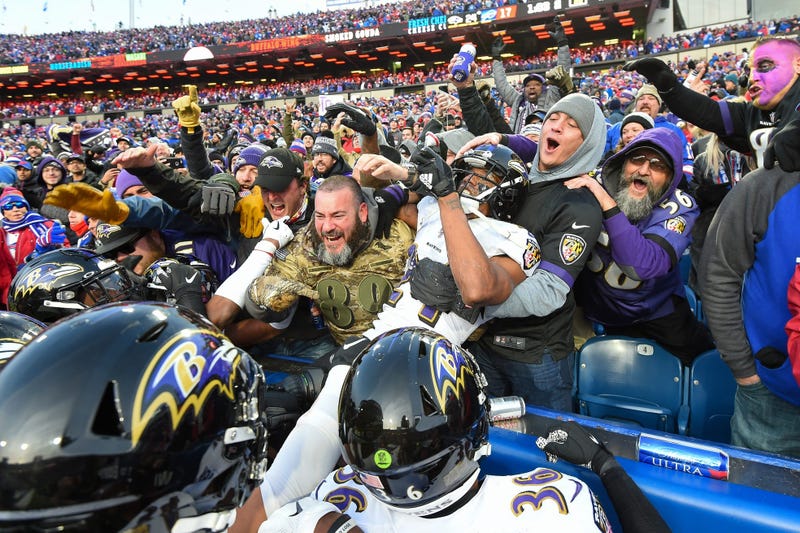 It wasn't pretty, but it doesn't need to be this time of year.

On 4th-and-8, Marcus Peters deflected Josh Allen's pass intended for John Brown, and Wink Martindale's defense came up big like they did all Sunday afternoon.

The Ravens overcame offensive struggles and willed their way to a 24-17 win over the Buffalo Bills. Baltimore clinched a playoff berth for the second-straight season with the win.

It was a dog fight throughout the entire game, and the Bills' defense did the best job of any team this season at containing Lamar Jackson. He rushed for just 40 yards and averaged 3.6 yards on 11 carries.

Justin Tucker's 36-yard field goal gave the Ravens a 3-0 lead in the first quarter before Jackson found Nick Boyle on a 3-yard touchdown pass. It was an unconvential toss by Jackson making something out of nothing, and it worked to extend Baltimore's lead 10-0 with 13:31 left in the second quarter.

Martindale's defense swarmed Allen, racking up six sacks and 12 quarterback hits. The second-year quarterback finished 17-of-39 for 146 yards and one touchdown, and saw the majority of his success in the second half. He overthrew a number of his wide receivers and the Bills were forced to settle for Stephen Hauschka field goals from 36 and 47 yards as the Ravens took a 10-6 halftime lead.

Most of the attention has gone to Mark Andrews as the team's leading receiver, but in his abcense, Hayden Hurst stepped up big. The former first-round pick caught a pass down the middle of the field, and raced to the end zone for a 61-yard touchdown. It was Hurst's longest touchdown of his young career, and it gave the Ravens a 17-6 lead early in the third quarter.

Hasuschka added a 48-yard field goal on the ensuing drive to bring the Bills within one score. The two teams then traded punts on six straight drives in a defense battle. That's until Jackson found Willie Snead IV on a 4-yard touchdown pass, but the game was far from over.

Big plays from Dawson Knox and Devin Singletary set up 3-yard touchdown pass from Allen to Cole Beasley with seven minutes left in the fourth quarter. The two connected on the two-point conversion to bring the Bills within one score 24-17.

It was a poorly officiated game on both sides, and three costly penalties by the Ravens on the Bills' final drive set up Buffalo on the Baltimore 16-yard line with just over one minute left to play. But the defense forced three straight incompletions, as the final deflection from Peters prompted him to celebrate in a beer shower with the Baltimore crowd.

Sign me up for every Marcus Peters celebration pic.twitter.com/wNzuNVPWpU

Make it nine straight wins for the Ravens as they return home next week on short rest to play the New York Jets on Thursday night.

Baltimore can clinch the AFC North with a Steelers' loss today, but they'll be playing in January no matter this year.