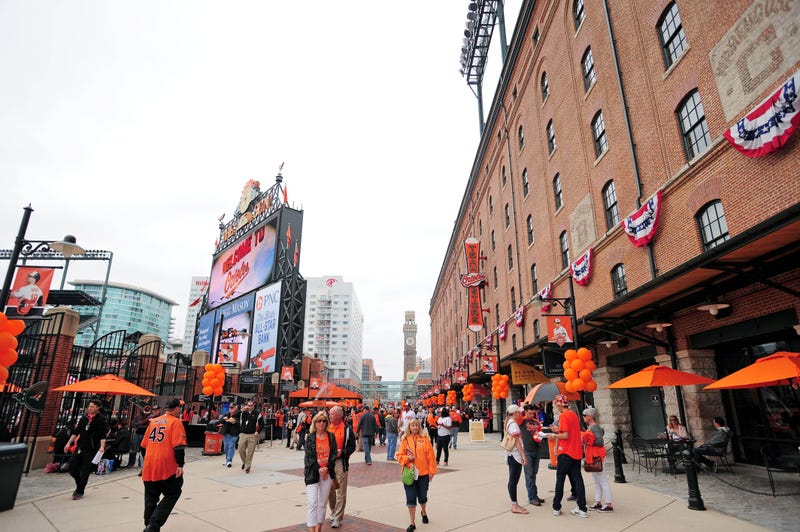 The Orioles recently revealed that they won't be holding their annual FanFest at the Baltimore Convention Center in 2020. The team has opted to try and find new ways to interact with the fans instead of sticking with the annual tradition. So what should the Orioles do instead? That remains to be seen but here are a few of my top ideas for what they could do this offseason to try and increase fan outreach.
A Block Party On Eutaw Street

Nothing is more iconic than Eutaw Street at Camden Yards so why not throw a block party type of event at one of the most legendary parts of the ballpark? You could still sling beers, sell merch at the team store and have players sign autographs all at one location. Sure, standing out in the cold might be a downside in the offseason but it would be something new and for those that have never been to Oriole Park; a block party as their first introduction to the stadium could bring them back during the season. The Orioles also introduced live music to the ballpark this past season so that could also be part of the fun. There's no Caleb Joseph in Baltimore anymore to rock our faces off on the drumset but I'm sure at least one of the players is musically inclined. They could also use the event to debut some local Baltimore musical talent or debut one of their upcoming performers. A block party on Eutaw Street could incorporate everything from previous FanFest's at one of the premier ballparks in major league baseball.

By now, many fans know that the future of this team is in the farm system. So why not take advantage?! They have affiliates all across the state of Maryland and one in Virginia (Norfolk) so this would be a great way to broaden their horizons for fan outreach. Not everyone from those surrounding areas are willing to drive to Baltimore for a one day event but if you bring the event to them, the likelihood of a good turnout increases. I don't think they should just put players on a bus and ride them around from stadium-to-stadium for the same event. That doesn't sound fun for the players and one of the keys to these events is keeping both the players and fans happy. If I was in charge, I would assign certain players to certain stadiums/events. For example, I would send guys like Ryan Mountcastle, Austin Hays, Cedric Mullins and a few guys from the majors to Norfolk since they have been there most recently. At this point, most fans are more excited to meet the young players in the farm system than the players on the major league roster outside of a select few. Build awareness around the farm system, the players they have and the plan moving forward.

Orioles School For Analytics
Analytics are now the heart and soul of how the Orioles plan on operating from now on so what better way to educate fans on how things work by...actually educating them?! I have no idea where they would hold this type of event but I would hold it somewhere you could have guest speakers on one end and then a field/open space to let people swing bats and throw pitches on the other end. The event is centered around analytics. What do they use, how do they use it and what does it mean? I don't know if this would be letting out house secrets or not but a simplified crash course on launch angle, spin rates and other terms people have probably heard about but don't understand is the concept. Let fans swing some bats with the blastmotion technology on it and then let them watch the swing in slow-mo or show them other visible variables used to see the strengths and weaknesses of their swings. Let them throw a few pitches and then show them the pitching version of that. Learn your spin rate and understand what it means. This could be for anyone of any age and I believe this would be one of the best ways to get a fanbase to jump on board a rebuild based on advanced analytics. It could be a very fun and interactive event.

On the other side of the field they could also have Sig Mejdal, Mike Elias and a few scouts and analysts available as guest speakers. I have no idea if any of them would be on board with speaking too openly about how their analytics are used but they could at least teach people some of the basics. They could also help people understand how not everything is based on numbers. The analysts, scouts and executives all work together compiling information, analyzing it, cross comparing it with scouting reports and projecting for the future. Not many casual fans understand how important communication and everyone being on the same page in an organization truly is.

The Ravens have done this in the past to great success. The Orioles could have mixed teams with players and fans (selected by random drawing), fans playing while players are umpiring or something along those lines. Sell tickets for the game itself and hold autograph signings afterwards. It would be an awesome way for fans to directly interact with real major leaguers. How much do the Orioles worry about injury in a charity softball game? I have no idea. That's up to them. If they did do a charity softball game though, I think people would be excited to be a part of it.

This is similar to the charity softball game but only for the kiddo's. The Orioles hold "kids run the bases" night's during the season so let's take it to the next level. What if they did a little league tournament with players on site for appearances and autographs? What if they just had a day where the kids could play catch with the players? What if they played chess with those giant pieces on the field. Who cares. It literally doesn't matter what they actually do while there...the important thing is players would be interacting with the young fans. Isn't that the goal of FanFest anyways? To find ways to reach younger potential fans? In my mind, this type of event would be a layup.

I have no inkling of what the Orioles will actually do this offseason but I'm certainly not going to denounce my fandom because they canceled one event in hopes of trying to find new ways to succeed.