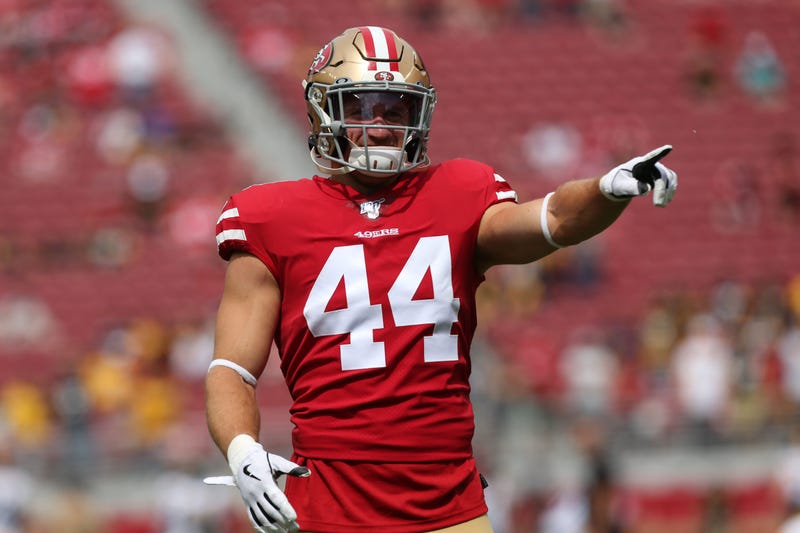 Not bad for a fullback!

49ers fullback Kyle Juszczyk has gone much of his career under the radar. And while he's has gone underrated, his value to the Niners has been on full display.

Juszczyk signed with the 49ers in 2017, after starting his career in Baltimore. He signed a four-year, $21 million contract to join rookie head coach Kyle Shanahan and the rebuilding 49ers. The move went under the radar but proved to be a calculated, productive addition for Shanahan's complex offense.

Since 2017, the man they call "Juice" has made three Pro Bowls and helped the Niners offense improve consistently year to year.

The Niners rank fourth in total yards and second in points, behind the Ravens' league leading scoring offense.

Juszczyk has been the Swiss Army knife for San Francisco. His versatility has been a key factor of the 49ers scheme, lining up all across the offensive line. On the first eight plays in the NFC Championship, Juice lined up at eight different positions. His ability to block, catch, and deceive opposing defenders has led to paramount success for San Francisco.

Firstly, #49ers George Kittle is an animal blocking... Just watch him.But now watch the subtle exchanging/combo blocks from Kittle and Kyle Juszczyk. These two work incredibly well together... I need to know if these are designed or ‘on the fly’ adjustments pic.twitter.com/cFItHS7fFx

The Ravens drafted Juszczyk in the fourth round of the 2013 NFL Draft, months after winning Super Bowl XLVII. This Sunday, he gears up to play in his first Super Bowl and will be an X-factor if San Francisco wins.

Juszczyk's teammates have lauded his significance on the roster, a rare description for a position many teams play without. 49ers linebacker Fred Warner described him as "one of the biggest weapons we have on offense, and that’s funny to say considering how many weapons we do have.’’

The Niners may look to utilize Juszczyk and a rush-heavy game-plan against the Chiefs in route to a Super Bowl victory. The Chiefs ranked 26th in the NFL in rush defense, allowing a whopping 128.2 rush yards per game.

Although Kansas City shut down the run-heavy offense of Tennessee in the AFC Championship game, among the differences for San Francisco is Juszczyk; a key stable of the Niners system that clears paths for running backs.