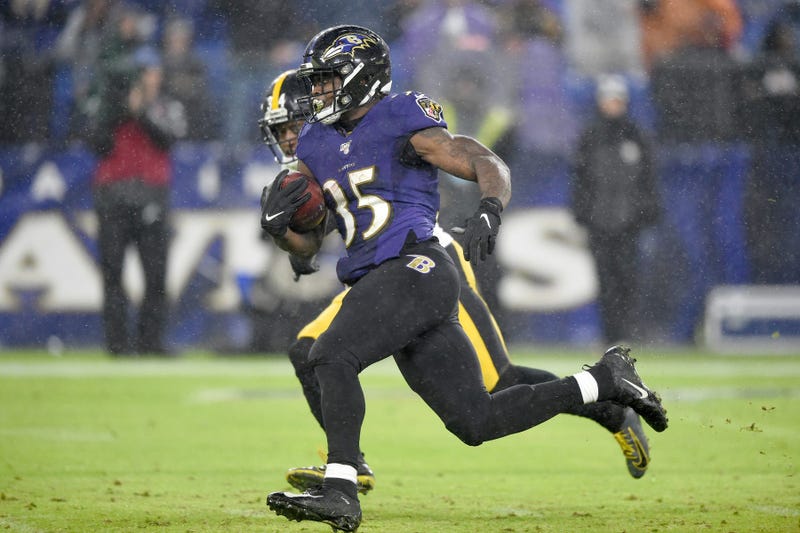 Ravens Head Coach John Harbaugh called Gus Edwards a starting-caliber running back in the NFL. It just so happens Edwards could assume that role in Baltimore's divisional round matchup against the Tennessee Titans on Saturday night.

Mark Ingram was limited in practice on Thursday, and is officially listed as questionable to play. Harbaugh didn't provide much insight to Ingram's status, but I'd bet the veteran running back is out on the field. If he'll be at 100 percent is the million dollar question.

But whether Ingram is full healthy or 50 percent, Edwards is crucial to the Ravens' run game success.

We've seen what Edwards can do as the starter. He rushed for 130 yards on 21 carries against a top-ranked Pittsburgh Steelers defense in Week 17. Edwards rushed for 711 yards and two touchdowns this season, which might not catch your eye until you realize he did that behind two 1,000-yard rushers in Lamar Jackson and Ingram.

Edwards is the definition of a downhill runner. Among all running backs with at least 100 carries this season, Edwards had the highest percent of carries gaining yards this season (88.4%). Ingram was No. 5 on the list.

Edwards' style of running is taxing to opposing defenses. It's a strong compliment to Jackson's speed and quickness on the outside. There's a reason why the Ravens set the most rushing yards by a team in a single season, ever.

Tennesse ranked 12th in the regular season, allowing 104.5 rushing yards per game, but have allowed rushes of 20+ yards six times and rushes of 40+ yards four times. There's an area for the Ravens to exploit and Edwards' contributions will be key.

Edwards adds as much in the receiving game as Ingram. That's why I think it's also important Ingram plays even if he isn't fully healthy. But in terms of the running game and production, there's small drop off from Ingram to Edwards in my opinion. Most teams don't have that luxury.

So with or without Ingram against the Titans, look for Gus Edwards to be heavily involved.