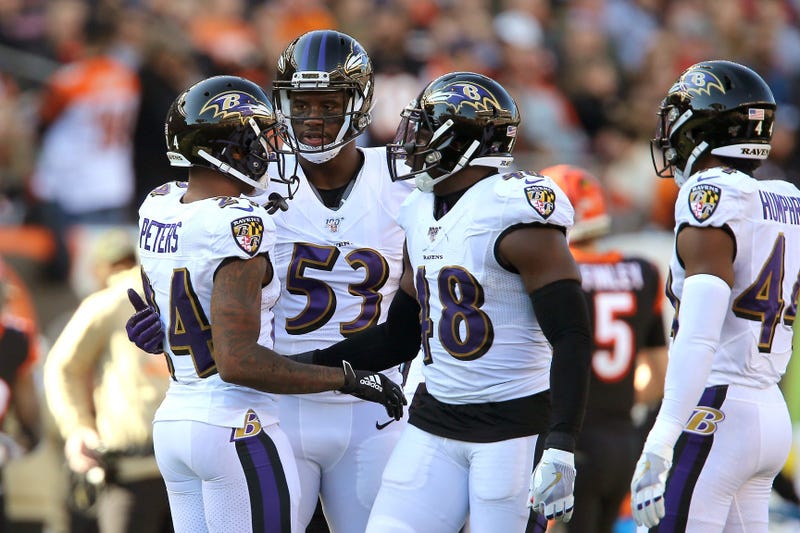 Once Marcus Peters caught it, he was gone.

Eighty-nine yards in the opposite direction on the pick-six off Cincinnati Bengals rookie quarterback Ryan Finley to give the Ravens a 28-3 lead.

It was Peters' second pick-six with the Ravens in three games. Baltimore is 3-0 during that span since Eric DeCosta sent a 2020 fifth-round pick, and second-year linebacker Kenny Young in exchange for the All-Pro cornerback.

At the time of the trade, there was a risk involved in acquiring Peters. He's slated to become an unrestricted free agent at the end of the 2019 season and he'll likely command top dollar on the market as one of the league's top cornerbacks.

But that doesn't mean his short stint in Baltimore should come to an end.

Peters is continuing to make his case to stay in Baltimore long-term with each game. Peters recorded five tackles and the pick-six in the Ravens' 49-13 win over the Bengals. He was named to Pro Football Focus' Team of the Week with a 92.0 overall grade.

"Peters led all Ravens defenders in overall grade against Cincinnati, as he recorded a 92.0 overall grade and a 93.4 coverage grade," PFF wrote. "He baited rookie Ryan Finley into an easy pick-six and allowed just 22 receiving yards on the day."

He's brought an instant impact to a defense that now leads the NFL with five defensive touchdowns this season. Both of his interceptions with the Ravens have resulted in touchdowns and his ball-hawking ability pairs well alongside the physical presence of Marlon Humphrey.

It's no secret the Ravens value their secondary. According to OverTheCap, they have $38 million invested in the position this season, $9 million more than the next closest team.

Re-signing Peters would pair him with Humphrey and Earl Thomas III in the secondary. That's an elite trio the Ravens can rely on for the 2020 season, while focusing their efforts on adding pieces to the front-seven.

Given the current cornerback market, there's a strong chance Peters will seek a contract making between $14-15 million next season. If there's a time for the Ravens to splurge, it's this offseason. They're expected to have an abundance of cap space, but plenty of impending free-agents on the defensive side of the ball to deal with.

Peters' game-changing ability is something that could make the Ravens' secondary elite, and I wouldn't be surprised to see him around for more than just this season.