Prior to the 2020 NFL season, six NFL teams debuted new uniforms, and a seventh adjusted their uniforms to reflect a change from their controversial nickname. At the halfway point of the season, here are our midterm grades on the new uniforms: 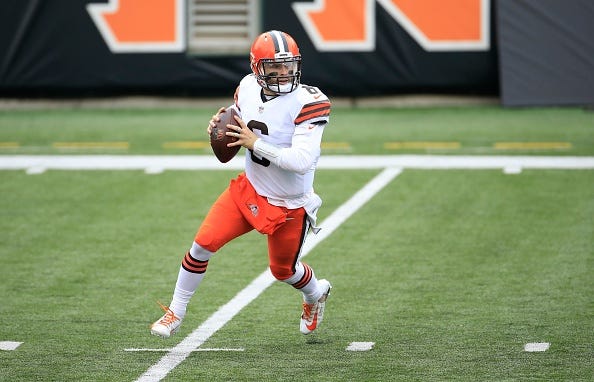 The Browns reverted to an old look in 2020. Photo credit (Andy Lyons/Getty Images)

In 2015, the Browns introduced new uniforms, ones with "Cleveland" written across the chest and "Browns" on both pant legs. The uniforms weren't awful, but the city and team name before forced into the look felt High School-ish. Given the simplicity of the team's classic orange helmets, it also didn't really make sense to have writing on the uniforms. Wisely, the Browns returned to a simpler look in 2020, one they never should have ditched in the first place. Quickly, they've become one of the more aesthetically pleasing teams to watch, with the white-on-orange uniform above drawing rave reviews. 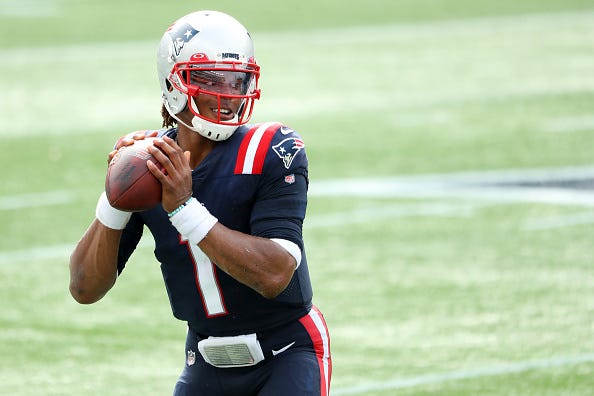 It's unclear why after the most successful two-decade run in NFL history the Patriots decided to tweak their uniforms. They kept the "Flying Elvis" logo, but added striping on the shoulders, two red stripes sandwiched by a white one. The blue-on-blue look above isn't offensive, but it's also not very inspiring either. The white-on-white uniform, which also features the shoulder and pant stripes, is solid, but not spectacular. In the grand scheme of things, these are rather forgettable uniforms, perhaps symbolizing what the organization has become in a post-Tom Brady world. 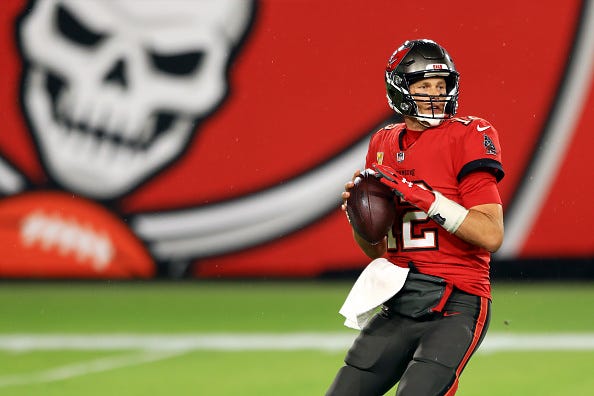 The Buccaneers have returned to an older look in 2020. Photo credit (Mike Ehrmann/Getty Images)

Like the Browns, the Buccaneers went back to an old look and are better for doing so. From 2014-2019 - what we'll refer to as the Jameis Winston era, even though he didn't debut until 2015 - the team wore jerseys that looked like crossing guard uniforms. We ranked the home jerseys that the team donned during that era as the third worst in NFL history. Just in time for Tom Brady's arrival, though, the team returned to a look very similar to the one that they used from 1997-2013. Both the red home jerseys with pewter pants and the white-on-white road uniforms are strong. The highlight of the uniforms is the black pirate ship on the left sleeve. The only reason that the Buccaneers don't get an A+ is because the pewter-on-pewter alternate, well, it's not great. 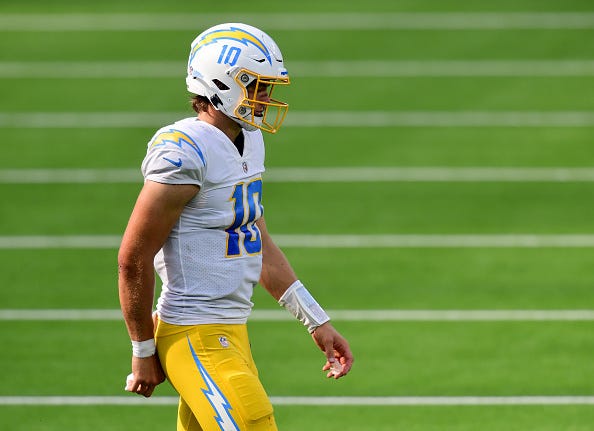 The Chargers attempted to refresh their look before the 2020 season. Photo credit (Harry How/Getty Images)

Simply put, the Chargers didn't need to make any updates to the look that they sported from 2007-2019, especially when you consider that they're one of the few teams that hit a home run with the addition of their "Color Rush" alternates. The new look, of course, isn't really new, as it's a modern twist on the look that the team donned from 1960-1974. But while numbers underneath the lightning bolt on the helmet look cool once in a while as a throwback, it comes off as crowded when worn every week. The yellow pants that the team has sported with the white jerseys are too much. When the team rebranded, they should have altogether ditched the navy blue look. Instead, they created an all navy blue alternate, which they wore in Week 9. Certainly, it isn't all bad. The powder blue jerseys are pretty much impossible to mess up. And we've yet to see the new twist on the popular Color Rush alternates, ones that we believe will look very good. Still, though, the uniform refresh wasn't necessary. 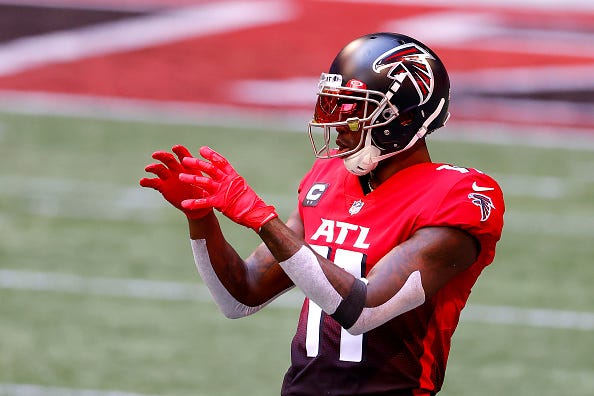 We've got nothing nice to say about the Falcons' uniform refresh. The look that the organization sported from 2003-2019 wasn't perfect, but it feels that way when compared to the 2020 uniforms. The numbering on the new uniforms is rough, especially the No. 2, which is especially noticeable when Matt Ryan wears that number. The primary black uniforms and primary white uniforms look bad and are uncreative. The team's red and black gradient alternate, which they wore in their Week 7 loss to the Detroit Lions, are the type of jersey it's hard to believe ever made it beyond focus testing. To make matters worse, the subtle adjustments to the Falcons' uniforms - matte helmets and "ATL" above the numbers - add to this disastrous uniform update. 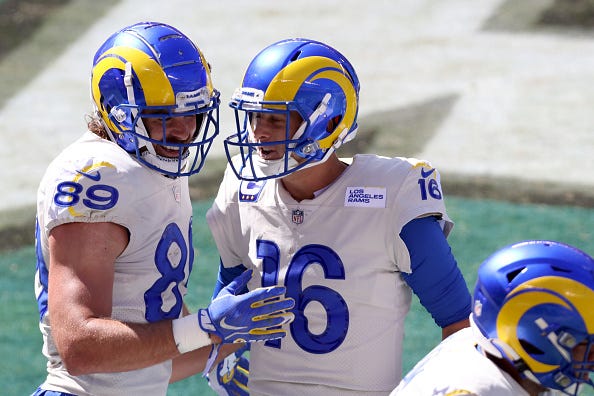 It's possible that they are a bit too loud, but the Rams' new blue and yellow helmets are pretty cool. Unfortunately, the same can't be said about the uniforms that the team has introduced this season. The "bone white" jerseys are among the worst the sport has ever seen - not only is the color bad, but the rubber lining on the numbers is brutal. We've long wanted the Rams to ditch the Kurt Warner-era navy blue for the classic royal blue shade, but while the blue uniforms aren't as offensive, the gradient numbers were unnecessary. Also, the patch that says "Los Angeles Rams" below the left shoulder seems like it could have been left off. Once an NFL team changes their primary look, they are stuck with it for five years. 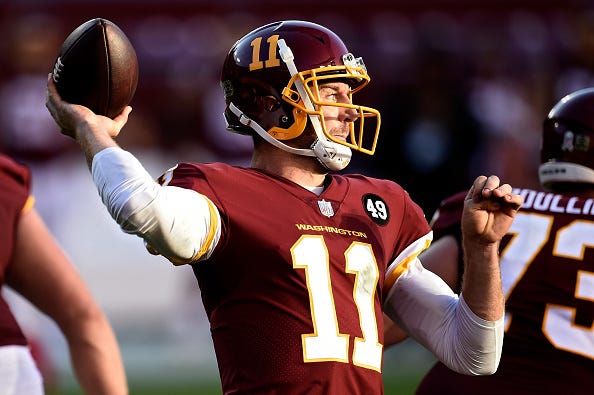 Will the Washington Football Team have a new nickname in 2021? Photo credit (Greg Fiume/Getty Images)

Let's be real, it's not fair to grade the Washington organization on these uniforms right now. They made the correct decision to bail on a nickname that is seen as a racial slur to Native Americans in July, leaving them without time to properly vet a new nickname and logo. And hence, the Washington Football Team was born. The organization wants to keep their burgundy and gold, which is why the changes to the actual jerseys have been minimal. The Native American logo was eliminated from the helmet, and simply replaced by gold numbers. The helmet itself is cool, but the gold numbers on the helmet don't match the primarily white numbers on the uniform. We'd guess that this offseason, Washington will announce a new nickname, with a helmet that actually matches with the uniforms.