There was a lot of sympathy directed toward longtime MLB umpire Joe West after he took a blow to the head from Bo Bichette's bat in late July.

But another bat-related incident didn't garner West much sympathy in Tuesday's Phillies-Nationals game -- at least not from former ballplayer and current Phillies color commentator John Kruk.

After rookie sensation Alec Bohm took a swing -- a completely normal, unadulterated swing -- and made the slightest possible contact with the leg of catcher Kurt Suzuki, West called backswing interference on the play, thus nullifying the stolen base that Roman Quinn had just recorded.

Tell us how you really feel, Kruk. pic.twitter.com/PiP9HO3njz

According to the official MLB rule book, the rule regarding backswing interference states the following:

"If a batter strikes at a ball and misses and swings so hard he carries the bat all the way around and, in the umpire’s judgment, unintentionally hits the catcher or the ball in back of him on the backswing, it shall be called a strike only (not interference). The ball will be dead, however, and no runner shall advance on the play."

That's the rule, and West got it right. However, it does seem a tad unfair that Suzuki could simply step into the path of Bohm's swing and successfully eliminate any opportunity for Quinn to have successfully swiped the bag. Maybe that's just me.

Kruk was so wound up that he was later worried whether or not he had crossed the line.

No, you did not say any bad words during that, Kruk. 😂 pic.twitter.com/vYQ6HFX2gK

It's another part of the eventful 2020 that Joe West has had to this point.

Before the baseball season began under its 60-game schedule, he came under fire for some of his comments regarding the seriousness of coronavirus, including when he told MLB insider Ken Rosenthal that he "(didn't) believe in (his) heart that all these deaths have been from coronavirus." There was a lot of anger directed toward him then. Then came the sympathy after the Bichette incident referenced above.

And then came confusion after one of the most 2020 baseball moments we've seen to this point. 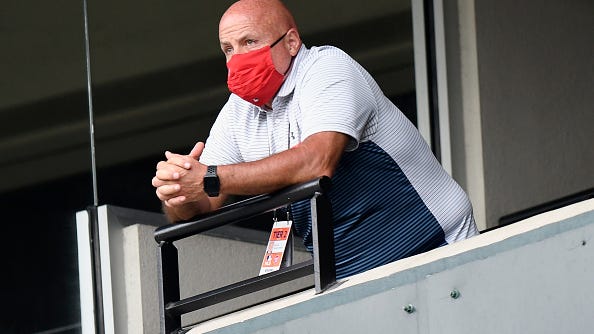