Beware: the following list has a lot of a) quarterbacks and b) NFC East representation. There are also some NFC East quarterbacks, which should surprise exactly no one.

Dak Prescott isn't one of them, nor are other stars whose seasons could be viewed as disappointing due to devastating injuries. I view that as disappointing, yes, but we shouldn't be disappointed in the players for their misfortune. The 11 names that appear below are players that we have the right to be disappointed in. They've underwhelmed. They've left you hanging. They've been the 2020 NFL season equivalents of every time a new NBA 2K or Madden video game comes out: A lot of hype followed by a lack of anything particularly hype-worthy.

However, an injury doesn't mean a player is exempt from the list. There's a fine line between injuries that make you feel bad for the player and injuries that, when mixed with other issues and overall poor play, only make the disappointment grow larger.

Luckily, there's another half of the 2020 season to be played. While all the players below are capable of turning their seasons around — or so we think — their less-than-stellar starts have us wondering whether or not we're going to see more of the same throughout Weeks 9-17.

All stats retrieved from Pro Football Reference and Football Outsiders. 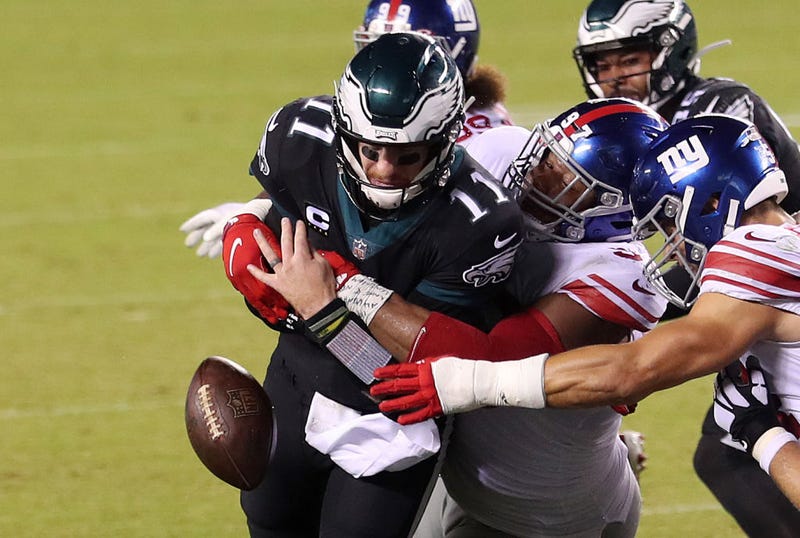 In this week's recording of the RADIO.COM Sports Fantasy Football Show, I mentioned that Carson Wentz was "uncharacteristically" awful on Sunday night against the Cowboys. Then, I took a step back, thought about it for a few seconds, and changed my mind. His performance was "characteristically" awful, at least in terms of the Wentz we've seen in 2020.

We've heard the arguments about his lack of bona fide receiving weapons, and his lack of an offensive line, and how Doug Pederson isn't calling plays that suit his style of play (I actually think the last point is a huge factor). But we've also seen countless examples of Wentz-ian slip-ups that are past the point of excuses. In fact, following Sunday's game, Wentz led the NFL with 23 turnover-worthy plays, 10 more than the next-highest QB (via PFF).

He may have delivered his magnum opus of mistakes against the Cowboys in Week 8.

Not even the camo arm sleeve could prevent this disaster from Carson Wentz 😬pic.twitter.com/u6EGt4c6no

What's it going to take for 2020 Carson Wentz to turn back the clock and become the 2017 Carson Wentz that Philadelphia fell in love with? Pederson seems to think that stability in his offensive surroundings will do the trick, but an answer eludes me for the time being. 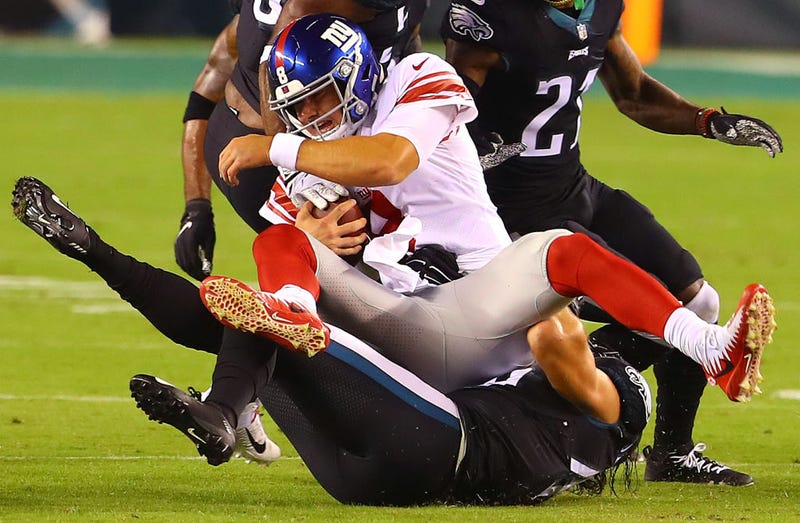 Daniel Jones takes a hit at the hands of the Eagles. Photo credit (Mitchell Leff/Getty Images)

Similarly to how it seems Carson Wentz can simultaneously keep the Eagles in games while also being the primary culprit in ugly losses, Daniel Jones' moments of glory are largely outweighed by his inglorious errors. Monday night's game against Tom Brady and the Buccaneers served as a good example.

He dropped a beautiful dime to Golden Tate for a touchdown with an opportunity to tie the game...

...and then capped off a mistake-riddled night with a late, inaccurate pass on the two-point attempt.

What was Daniel Jones waiting for?

He had Dion Lewis open early in the play, waited way too long.pic.twitter.com/L7NYShHDhi

He still showcases his athleticism and his arm strength, but the errors may come too frequently for the Giants to want to continue with him at the helm, especially if they have a chance for Trevor Lawrence in the draft. 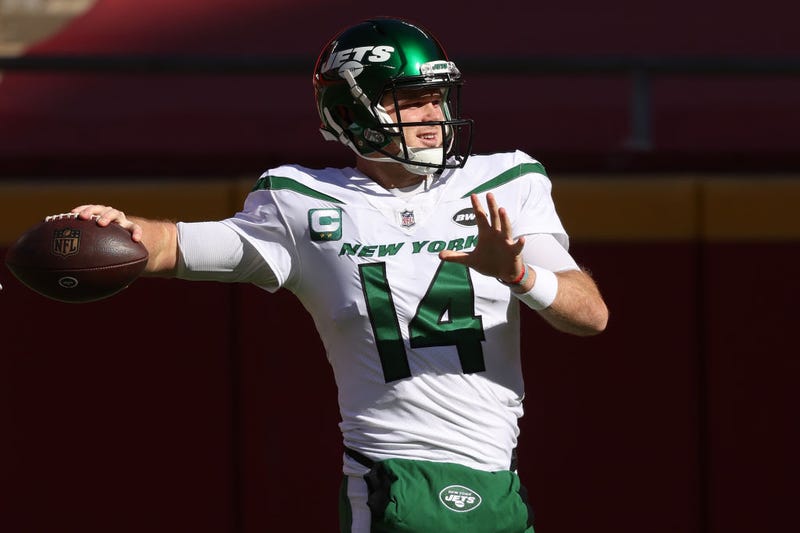 The biggest obstacle in the way of the Giants drafting Trevor Lawrence is the Jets, and Sam Darnold's shoddy play is at least partially to blame. Of course, Adam Gase is widely accepted to be at fault for the Jets' woes this year, woes that have given them a very realistic chance at going 0-16.

Still, for a player who was expected to experience some sort of breakout campaign in 2020, Darnold hasn't lived up to the hype or even approached mediocrity. His weapons are weak — losing Robby Anderson hurt a ton, and Chris Herndon's disappearing act doesn't help — and his offensive line has been as porous as any. Still, between injuries, poor decisions and certain analytics that show just how awful he's been, it's tough to defend the idea of moving forward with Darnold as the franchise quarterback after a third year of disappointment. 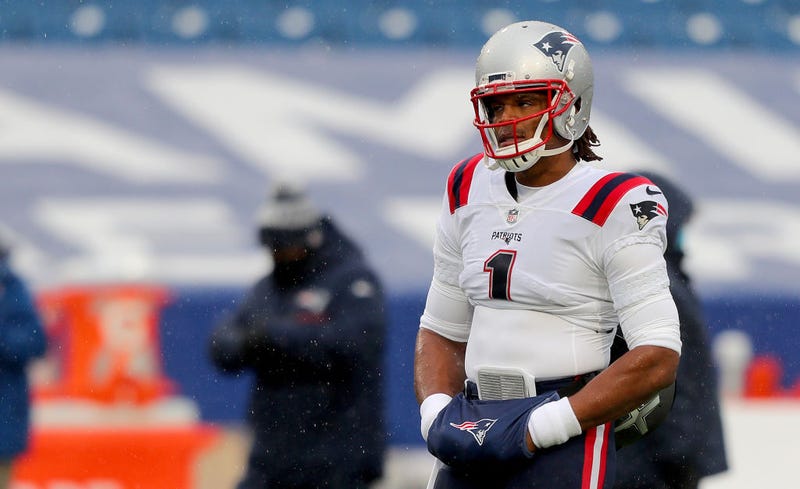 The year started out on a good note for Newton and the Patriots, as they won two of their first three games. Quite frankly, the loss was an impressive one, too, as they competed with the high-powered Seattle Seahawks on Newton's 397 passing yards and three total touchdowns.

Since that start, it has gone downhill... and fast. A positive COVID-19 test is out of his control, but Newton's subsequent performances have not promised all too much for the future of the 2020 Patriots. In Weeks 6-8, Newton totaled 425 passing yards, no passing touchdowns and five interceptions in three losses, the first of which came against a poor Week 6 Broncos team.

Despite his struggles, the Patriots are rolling with Cam going forward, but whether or not they have winning aspirations in 2020 is another question. 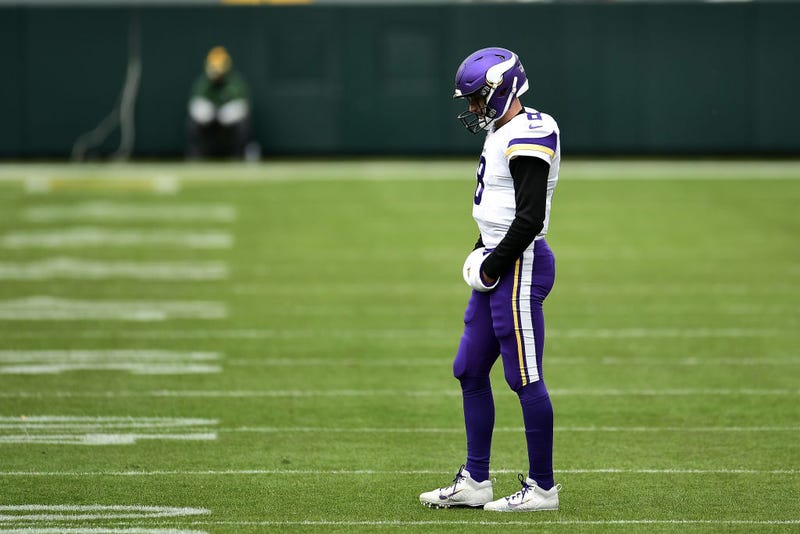 The Minnesota Vikings and Kirk Cousins agreed to a two-year, $66 million extension because he 26-touchdown, 6-interception 2019 Pro Bowl season. They did not sign him to this lucrative deal so that he could lead the Vikings to a 2-5 record at the midway point of the season, throwing only two more touchdowns than interceptions despite boasting two of the most analytically impressive wide receivers in the NFL. Justin Jefferson is currently ranked No. 2 among all wideouts by Pro Football Focus, while Adam Thielen is No. 5.

Cousins even admitted earlier in the year that his tendency to throw interceptions could result in his benching.

"The reality is if the pace I'm on in terms of the interceptions, if that were to continue, I won't finish the season," Cousins said (via ESPN). 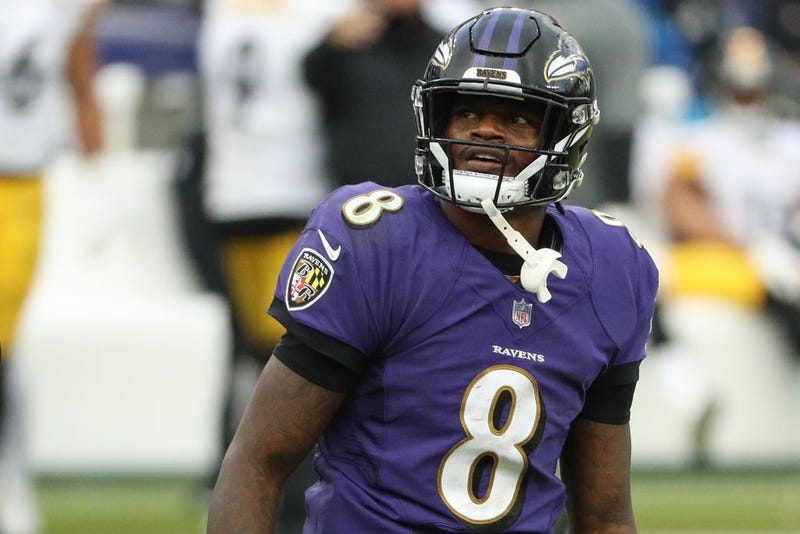 I'm fairly certain that the majority of NFL teams would take Lamar Jackson and his 2020 output as an upgrade over their current quarterback situations. However, it's been a pretty underwhelming season for the reigning MVP, especially when comparing his final seven games of 2019 with his first seven games of 2020.

Anything short of unstoppable would be considered disappointing for Jackson, but he's actually looked quite stoppable at times this season, especially in games against likely playoff competition. He was held to 97 passing yards against the Chiefs in a Week 3 loss, and he committed four turnovers in a loss to the Steelers in Week 8.

Some have gone so far as to call this regression "alarming." Still, as you can see from the 2019 stat line above, the second half is when he broke out. This year, though, it seems like defenses have been able to contain Jackson with a little more ease than what we expected. 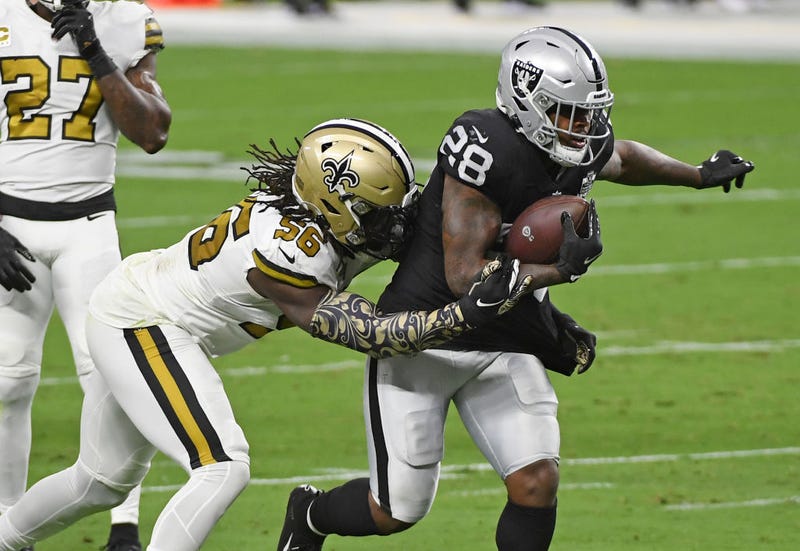 Josh Jacobs was asked to shoulder a large load for the Las Vegas Raiders entering 2020, and that seemed like an exciting prospect to most Raiders fans and fantasy football players. And while the workload is certainly there — he has the third-most touches in the league (165) despite playing in seven games, while Ezekiel Elliott (166 touches) has played in eight — the production isn't. Of all players with at least 100 touches, only Frank Gore has a lower yards per touch figure (3.7) than Jacobs' 3.9.

Jacobs finished 2019 as Football Outsiders' No. 12 running back in terms of total value out of 45 eligible rushers, meaning that a second-year improvement could boost him into the top tier. Instead, he ranks at No. 31 out of 32 eligible running backs in that same metric to this point in the season.

Hopefully, his relatively strong showing in Week 8 (31 carries, 128 yards) is a sign of things to come in the second half. 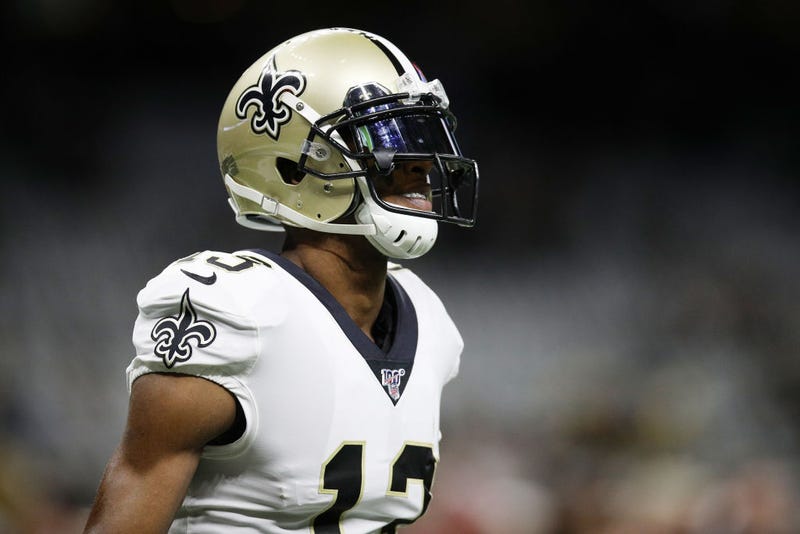 This is one where injuries come into play, as he's only been on the field for one game and suffered a high-ankle injury in Week 1 against the Buccaneers. Since then, however, he has experienced more than just injury issues — though a practice hamstring injury was the latest impediment to his return — as he was involved in an altercation with a teammate and was disciplined for his actions.

All in all, none of this is what you want from the guy who was voted as the top wide receiver in the entire NFL by his peers, the guy who was awarded with a huge extension from the Saints and the guy who shattered the NFL single-season receptions record in 2019 in an All-Pro performance. He can turn it around with a strong second half, but when he'll see the field and whether or not he'll be able to overcome first-half difficulties remain unclear. 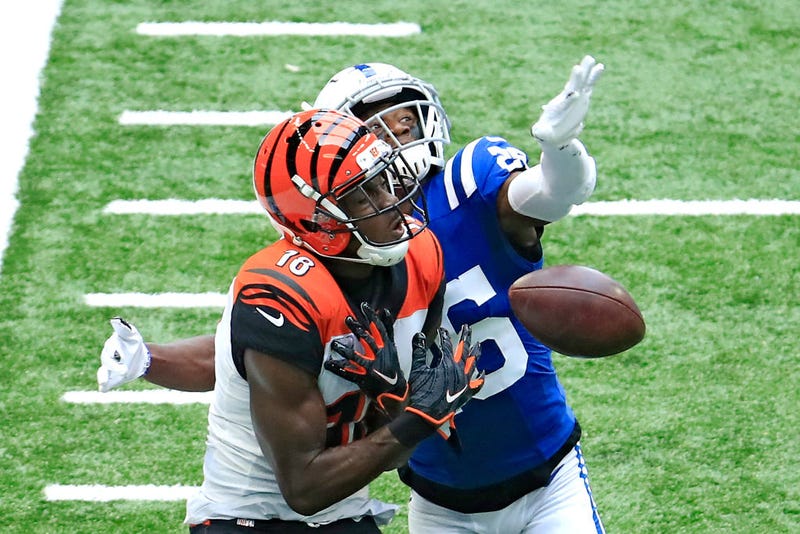 There are 16 receivers in the NFL with at least 60 targets to this point. A.J. Green checks in at No. 14 overall. Of those 16 receivers, Green's yardage output is by far the lowest — in fact, it's so low that it checks in at No. 60 in the entire NFL. No. 14 in targets, and No. 60 in receiving yards. That is a baffling stat. This one almost goes without saying, but his 5.0 yards per target is one of the lowest totals in the league, behind only Jets receivers Chris Hogan (4.5) and Jeff Smith (4.3).

He may be starting to pick it up, considering he totaled 15 catches for 178 yards in the span of Weeks 6-7. However, it's hard not to call his first-half performance a disappointment. It's not only the counting stats; the analytics actually peg him as the very worst eligible wide receiver out there. Football Outsiders' total value metric ranks him as the No. 71 wide receiver out of 71 candidates. He looked sluggish, he looked out-of-sync with Joe Burrow and he's hoping to put that past behind him and show strength in half two. 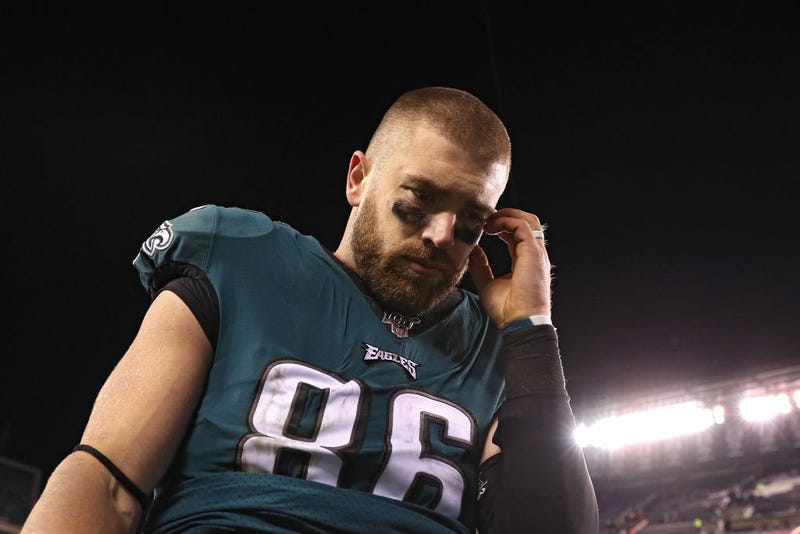 You thought Green's 5.0 yards per target stat was bad? Try Ertz's 4.0 yards per target, well below his career average of 7.3 and making him about as effective in the passing game as an unexciting running back is in the backfield. Injury issues have only made his campaign worse, but his on-field performance is about as low as it can get.

Football Outsiders ranks him as the No. 39 pass-catching tight end of 39 eligible candidates, well below the other NFC east tight ends (hint, hint) and the aforementioned Chris Herndon. Trade rumors seem to have died down, but that may be because no one wants Ertz as much as they may have initially thought after seeing what he's done to this point. 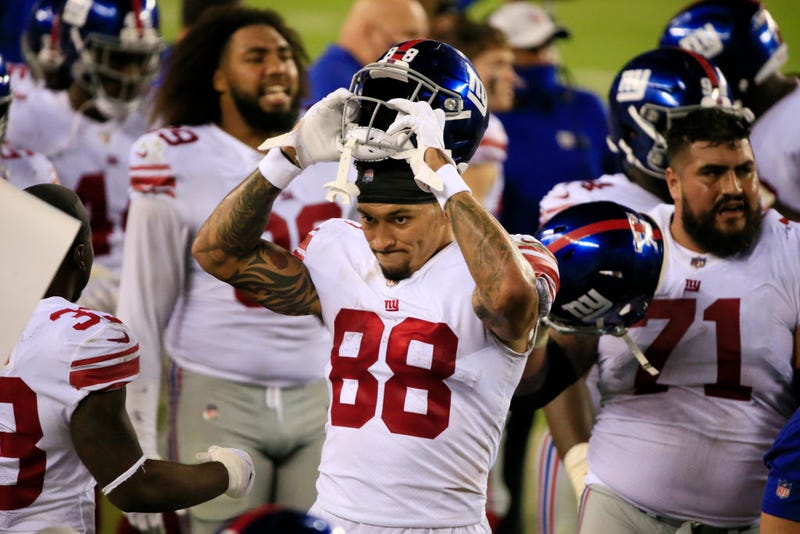 Zach Ertz hasn't helped the Eagles to win all too much in 2020. Evan Engram has.

The best incompletion of the week goes to Daniel Jones who hits Evan Engram in stride for what should have clinched the game pic.twitter.com/VH0p0CMFRT

He redeemed himself with a nice grab on an eerily similar throw against the Buccaneers on Monday night, but he still hasn't done much to inspire confidence in Giants' fans who have been waiting for the freak athlete to finally emerge as a star tight end. His promising rookie campaign has teased Giants fans and fantasy owners alike for years to come, but he doesn't have much in the way of consistent production to show for that hype.

Football Outsiders ranks him as the No. 37 tight end of 39 eligible candidates, ahead of only Ertz and Herndon, to this point in the year.