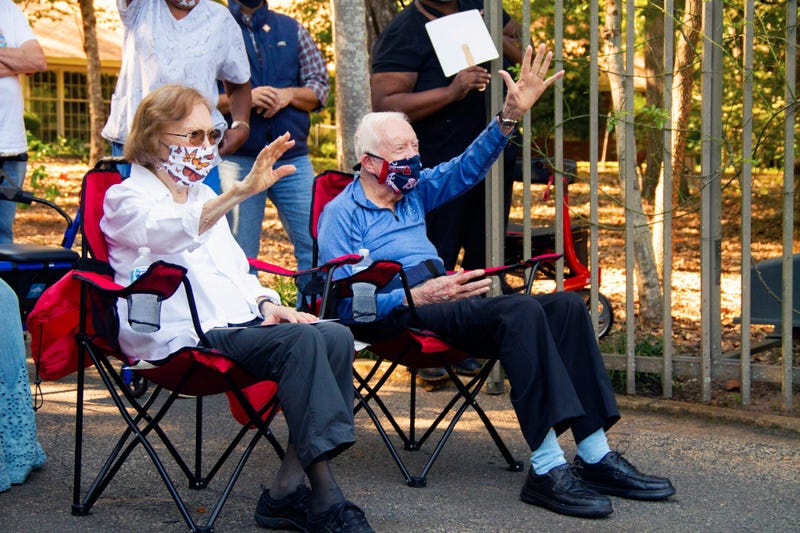 ATLANTA (AP) — Former President Jimmy Carter marked his 96th birthday Thursday, the latest milestone for the longest-lived of the 44 men to hold the highest American office.

Carter celebrated at his home in Plains, Georgia, with his wife Rosalynn, who is 93. Photos released by the Carter Center in Atlanta showed the couple, married for more than 74 years, seated in lawn chairs at the gates of their residence and waving as local residents honored the 39th president with a parade. The procession featured golf carts and other vehicles festooned with American flags, streamers and balloons.

Carter, who held office from 1977-81, has largely receded from public view amid the coronavirus pandemic and his own health challenges due to a series of falls in 2019. He previously survived a dire cancer diagnosis in 2015. Yet Carter remains a quiet force in politics at home and, through his post-presidential Center, in public health and human rights advocacy around the world.

Carter on Tuesday endorsed his fellow Democrat, the Rev. Raphael Warnock, in one of two competitive Georgia U.S. Senate races this fall. Carter’s announcement aligned him with another former president, Barack Obama, and other party power brokers in backing Warnock over Democrat Matt Lieberman, whose father was the party’s 2000 nominee for vice president.

Though Carter remained neutral in Democrats’ 2020 presidential primary he fielded calls and visits from multiple candidates. Jimmy and Rosalynn Carter, now 93, recorded audio addresses for Democrats’ virtual national convention urging the election of nominee Joe Biden, who was a young senator from Delaware when Jimmy Carter won the presidency in 1976.

“Joe Biden was my first and most effective supporter in the Senate,” Carter told the convention. “For decades, he’s been my loyal and dedicated friend.”

Carter also gained new attention recently upon death of Supreme Court Justice Ruth Bader Ginsburg. Carter is the only president since 1850 not to make a single Supreme Court nomination, but he reshaped the lower courts with a record number of nominations of women and non-white jurists, Ginsburg being the most notable.

In 1980, Carter tapped Ginsburg, then the nation’s most accomplished civil rights attorney, for the U.S. Court of Appeals for the District of Columbia Circuit, considered the nation’s second highest court. She was the second woman Carter nominated for the D.C. Circuit, setting her up for a promotion to Supreme Court 13 years later.

“He looked around at the federal judiciary and he said, ‘You all look like me, but that’s not how the great United States looks,’” Ginsburg said to a Fordham University Law School forum in 2016.

Perhaps most notable among Carter’s 2020 election maneuvering is the Carter Center for the first time designating the United States as a “backsliding” democracy. The Center announced after the Democratic convention that it would devote resources to ensuring free and fair U.S. elections this fall. The Carters founded the Center in 1982, two years after he lost his re-election bid to Republican Ronald Reagan.

The Center has monitored more than 110 elections in 39 countries since 1989, but it was a striking development for the institution to turn its focus to Carter’s home country, the world’s leading democratic superpower since World War II. The development comes as President Donald Trump repeatedly casts doubt on the integrity of the U.S. voting system, regularly firing off a cascade of mistruths about the voting process and asserting that the system is “rigged” against him.

As recently as a Tuesday night debate against Biden, Trump refused to say he’d accept the results and said he’d urged his supporters “to go into the polls and watch very carefully, because that’s what has to happen.”

Explaining the decision to monitor a U.S. election, a Carter Center statement said “backsliding” democracies are “often characterized by polarization, a lack of public trust, ethnic or racial divisions and injustice, and fears that election results won’t be seen as credible or could trigger violence.”

Carter has not recently addressed Trump’s statements directly and, according to a spokeswoman, is not granting interviews ahead of the election. But Carter said last September during his last annual town hall at the Carter Center that it would “be a disaster to have four more years of Trump.”

Siding with Biden over Trump isn’t surprising for a Democratic former president, but it does involve Carter ignoring one of his own recent observations about the presidency. Weeks before his 95th birthday last year, Carter alluded to the advanced ages of several candidates at the time. Trump, 74, would be the oldest president ever inaugurated for a second term. Biden, 77, would the oldest sitting president in history, reaching 82 near the end of a prospective first term.

“I hope there’s an age limit,” Carter said jovially at his town hall when asked whether he’d run again. Then he turned more serious: “If I were just 80 years old, if I was 15 years younger, I don’t believe I could undertake the duties I experienced when I was president.”