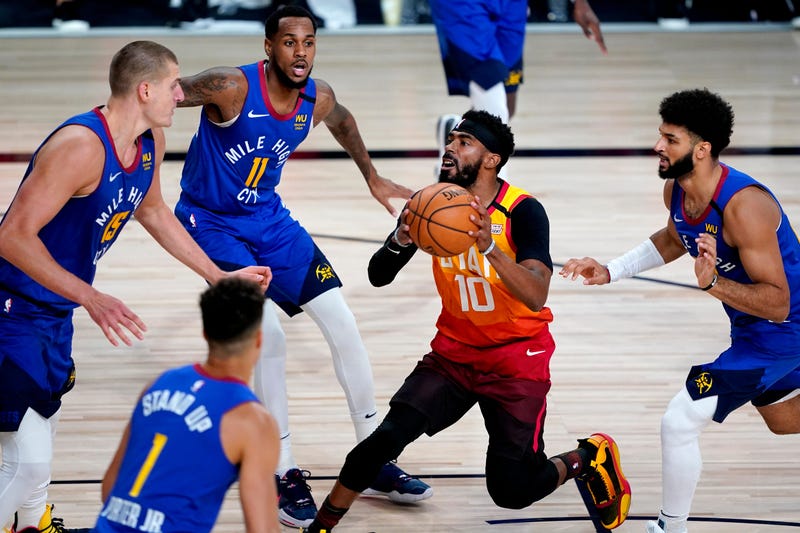 LAKE BUENA VISTA, Fla. (AP) — Mike Conley made a career playoff-high seven 3-pointers and scored 27 points in his return from quarantine, helping the Utah Jazz rout the Denver Nuggets 124-87 on Friday for a 2-1 lead in the first-round series.

The 37-point loss tied the third-worst in Denver's playoff history. The record is 44 against the Los Angeles Lakers on May 22, 1985.

Conley left the NBA bubble for the birth of his son and returned returned Monday night. He went through a four-day quarantine that ended Friday. He was 7 of 8 from 3-point range and had four assists.

Rudy Gobert had a career playoff-high 24 points courtesy of numerous easy dunks and layups. He also had 14 rebounds.

Utah led by 25 in the second quarter, built it up to 30 in the third quarter on a breakaway dunk from Mitchell and extended it to 39 in the fourth.

It's the second straight lopsided win for the Jazz in the series after dropping Game 1 in overtime.

Nikola Jokic led Denver with 15 points. The Nuggets had 17 turnovers and shot 37.5% from the floor.

Nuggets: Will Barton III (right knee) and Gary Harris (right hip) have yet to play in the bubble. Asked about possible Harris’ availability, Nuggets coach Michael Malone said: “He’s getting in a really good place mentally and physically. It would be great to get him back at some point in this series if that’s possible.” ... Rookie Bol Bol scored 11 points in the fourth quarter.

Mitchell posted on social media a video outside of the hotel room of a quarantined Conley, who playfully banged on the window in the distance. The caption was: “We gonna see you soon.”

Finally let out of his room, Conley played more than 24 minutes and was 9 of 13 from the floor.

The Nuggets were outscored by a combined 74-48 in the third quarter of the opening two games.

“I have to have a much better halftime speech,” Malone cracked before the game.