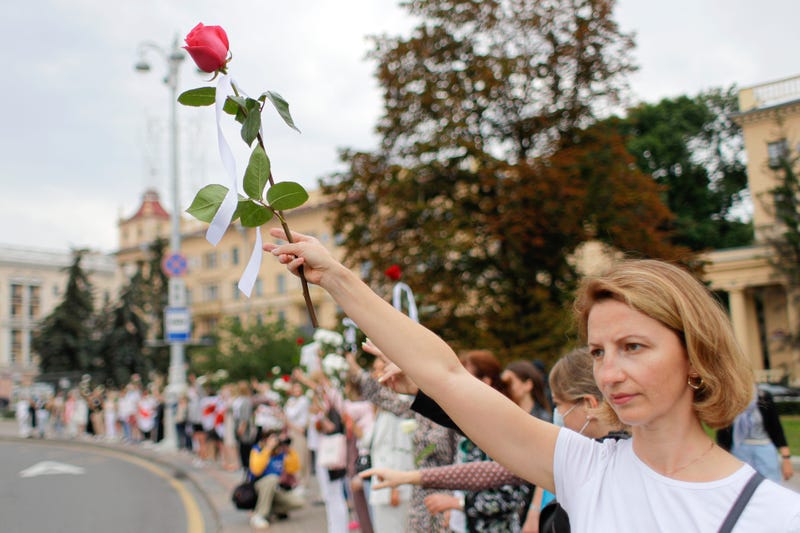 Photo credit Belarusian opposition supporters hold flowers and flash victory signs during a protest in Victory Square in Minsk, Belarus, Thursday, Aug. 20, 2020. Demonstrators are taking to the streets of the Belarusian capital and other cities, keeping up their push for the resignation of the nation's authoritarian leader. President Alexander Lukashenko has extended his 26-year rule in a vote the opposition saw as rigged. (AP Photo/Sergei Grits)
By The Associated Press

MINSK, Belarus (AP) — Belarusian authorities on Thursday opened a criminal probe against opposition activists who set up a council to negotiate the transition of power amid massive protests challenging the extension of the 26-year rule of the country's authoritarian leader in a vote the opposition saw as rigged.

President Alexander Lukashenko has dismissed the protesters as Western puppets and threatened opposition leaders with criminal charges. Following up on his statement, the prosecutors opened a criminal investigation against the opposition activists on charges of undermining national security, and a leading opposition figure reported being threatened with arrest.

The 65-year-old Belarusian leader dismissed the European Union's criticism of the Aug. 9 vote and told its leaders to mind their own business.

The EU's leaders on Wednesday rejected the official results of the election that showed Lukashenko win 80% of the vote and expressed solidarity with protesters. The EU said it’s preparing sanctions against Belarusian officials responsible for the brutal post-election police actions.

The crackdown fueled massive outrage and swelled protesters’ ranks, forcing authorities to change tactics and stop breaking up crowds that grew to an unprecedented 200,000 on Sunday.

Protests continued Thursday in Minsk and other Belarusian cities for the 12th straight day.

After standing back for days, police again beefed up their presence on the streets of the Belarusian capital Wednesday, blocking access to some government buildings and also deploying in numbers outside major factories where workers have been on strike since Monday.

The industrial action that has engulfed major factories across the country cast a tough challenge to Lukashenko, who had relied on blue-collar workers as his core support base.

In a bid to stop the strike from spreading, Lukashenko on Wednesday said that the participants would face dismissal and ordered law enforcement agencies to protect factory managers from the opposition pressure.

Hundreds of state television employees have also gone on strike, shaking the government’s control of the media.

The Belarusian leader also warned members of the Coordination Council who held their first meeting Wednesday that they could face criminal responsibility for their attempt to create “parallel power structures.”

The council called for a new presidential vote organized by newly formed election commissions and demanded an investigation into the crackdown on protests and compensation for the victims.

The Belarusian Prosecutor General's office said the creation of the council violated the constitution and opened a criminal inquiry against its founders on charges of threatening national security.

“The creation and the activities of the Coordination Council are aimed at seizing power and inflicting damage to the national security,” said Prosecutor General Alexander Konyuk.

The council members have rejected the accusations and insisted that their actions have been in full conformity with Belarusian law.

The opposition body consists of top associates of Lukashenko’s main challenger, Sviatlana Tsikhanouskaya, as well as rights activists and representatives of striking workers. It also includes the nation’s most famous author, Svetlana Alexievich, who won the 2015 Nobel Prize in literature.

A leading council member, Pavel Latushko, who was fired earlier this week for siding with protesters, said he had received threats and could move to Russia to avoid being arrested. The facade of his house in Minsk was splashed with red paint overnight.

Tsikhanouskaya, a 37-year-old former English teacher who moved to neighboring Lithuania after the vote under pressure from the Belarusian authorities, met Thursday with the Baltic country’s Prime Minister Saulius Skvernelis, who promised to help "achieve free and fair elections in Belarus.”

“We spoke about these tests she faced during the election campaign and the huge responsibility she had taken on, about her life in Lithuania, personal safety and the safety of her family,” the prime minister said on Facebook where he also posted a photo of them together.

Vladimir Isachenkov in Moscow and Liudas Dapkus in Vilnius, Lithuania contributed to this report.

Follow AP’s coverage of the political turmoil in Belarus at https://www.apnews.com/Belarus