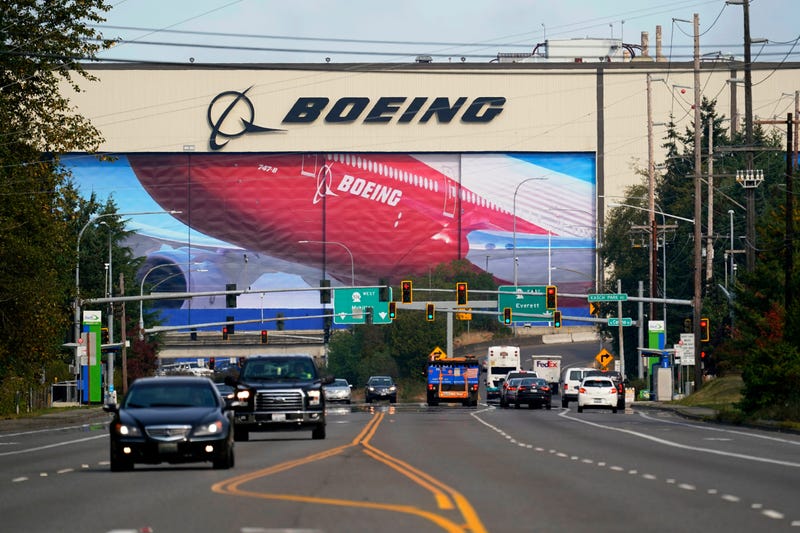 Photo credit Traffic passes in view of a massive Boeing airplane production plant Thursday, Oct. 1, 2020, in Everett, Wash. Boeing said Thursday that it will consolidate production of its two-aisle 787 jetliner in South Carolina and shut down the original assembly line for the plane near Seattle. The company said the move will start in mid-2021. (AP Photo/Elaine Thompson)
By The Associated Press

SEATTLE (AP) — Boeing said Thursday it will shut down the original assembly line for its two-aisle 787 jetliner near Seattle and consolidate the plane's production in South Carolina as the airline industry tries to weather the global pandemic.

The company did not immediately say whether jobs would be eliminated in the move, but Rep. J.T. Wilcox, the Republican leader of the state House of Representatives, posted on Facebook following a call with the company that the decision would affect about 900 jobs in Washington state.

Boeing had a statewide workforce of more than 70,000 people before announcing in April that it was cutting 10% of its employees.

The 787 is used mostly for international routes. Washington state in 2003 granted Boeing massive tax breaks — amounting to about $100 million a year — to entice the company to assemble the plane in the state. The subsidies were revoked earlier this year after the World Trade Organization found them illegal.

Washington Gov. Jay Inslee called Thursday's decision on 787 prodiction “an insult” and said the state would have to review tax breaks Boeing continues to receive.

“I understand the serious market forces Boeing faces today,” Inslee said. “What I don’t understand is why the company can’t commit to restoring production here when the market for this plane improves.”

At an afternoon news conference Inslee said he had multiple conversations with Boeing and they did not give any indications of anything the state could do to keep the production here.

“If you hear voices blaming regulations, taxes, transportation, training, I can tell you that’s bunk. Because the Boeing company never suggested any improvements we could make," Insles said.

However the Democrat added: “We can’t be in a position where the companies just dictate to us and we just say, ‘yes sir,’ and when they ask us to jump, we say ‘how high.’ We can’t do that. It’s just not fair to our state. If anyone thinks that’s divisive, I would suggest it is responsible."

Employees at Boeing's plant in Everett, Washington, began building the 787 in 2007, turning out a jetliner with a largely carbon composite fuselage for better fuel efficiency.

The company had fuselages built in North Charleston, South Carolina, then shipped across the country for assembly. In 2011 it opened a 787 final assembly line in South Carolina, picking South Carolina largely for its anti-union culture, following strikes by Seattle-area machinists in 2005 and 2008.

“We are committed to helping Boeing — and businesses large and small — grow and prosper in our state," South Carolina Gov. Henry McMaster said Thursday. "Today’s announcement is a testament to our hardworking people, and to the fact that companies know they can find long-term success right here in South Carolina.”

Boeing announced this summer that it was studying the possibility of combining all 787 production at one location, and the newer South Carolina plant soon emerged as the favorite. Workers in Everett will continue making the smaller 787-8 and 787-9 models until the company cuts production to six 787s a month next year, the company said.

Lawmakers and union officials in Washington state said Boeing was wrong to abandon the skilled aerospace employees who worked on the 787 in the state. Ray Goforth, executive director of the Society of Professional Engineering Employees in Aerospace, said the union would "partner with community stakeholders to attract aerospace jobs to the state by marketing the aerospace talent pool Boeing is walking away from.”

Paul Shearon, president of the International Federation of Professional and Technical Engineers, called the decision “bad news for organized labor,” saying "the workers in South Carolina will be taken advantage of, and it will be used to drive down the wages and benefits of workers in the Seattle area.”

In August, Boeing grounded eight 787s after structural problems were found where fuselage panels are joined at another company building in South Carolina. Shearon said incidents like that will undermine confidence in Boeing, which is already trying to recover from two devastating crashes involving the smaller 737 Max.

Democratic U.S. Rep. Rick Larsen, whose district includes Everett, said he would fight to bring 787 production back to Washington once air travel rebounds.

“The strength of the Pacific Northwest’s aviation and aerospace industry includes the region’s strong education system, trained workforce, robust supply chain, extensive manufacturing experience and overall quality of life,” Larsen said. “We have earned our place as the leader in the U.S. aerospace industry and will continue to earn it.”

Associated Press writers in David Koenig in Dallas and Rachel La Corte in Olympia, Washington, contributed to this report.