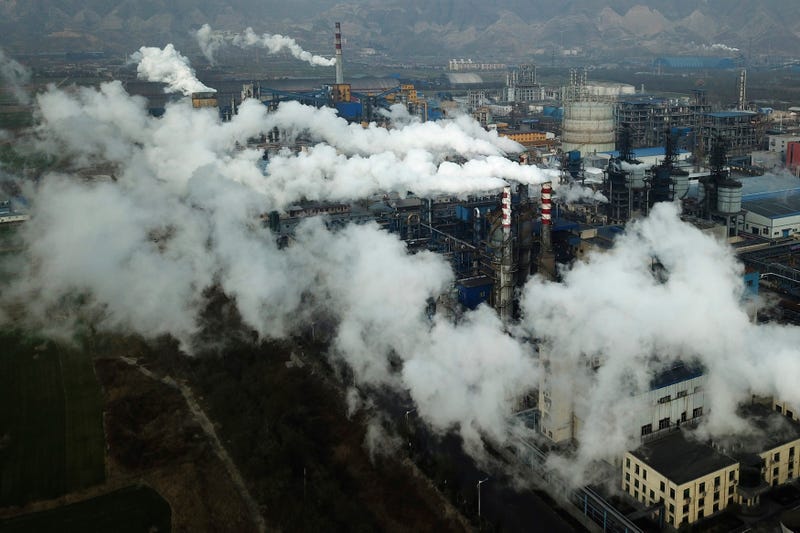 Photo credit FILE - In this Nov. 28, 2019 file photo, smoke and steam rise from a coal processing plant in Hejin in central China's Shanxi Province. Chinese President Xi Jinping says his country will aim to stop pumping additional carbon dioxide, the main global warming gas, into the atmosphere by 2060. Xi's announcement during a speech Tuesday, Sept. 22, 2020, to the U.N. General Assembly is a significant step for the world's biggest emitter of greenhouse gases and was immediately cheered by climate campaigners. (AP Photo/Sam McNeil, File)
By The Associated Press

Xi's announcement during a speech Tuesday to the U.N. General Assembly is a significant step for the world's biggest emitter of greenhouse gases.

Calling for a “green revolution,” Xi said the coronavirus pandemic had shown the need to preserve the environment.

“Humankind can no longer afford to ignore the repeated warnings of nature,” he said.

Citing the Paris Agreement that he and former U.S. President Barack Obama helped forge in 2015, Xi said his country would raise its emissions reduction targets with “vigorous policies and measures.”

“We aim to have CO2 emissions peak before 2030 and achieve carbon neutrality before 2060,” he said.

The term “carbon neutrality” means releasing no additional CO2 into the atmosphere, though technically it allows countries to keep emitting if they ensure that an equal amount is captured again in some form.

The announcement was cheered by climate campaigners. Greenpeace executive director Jennifer Morgan called it “an important signal” that showed climate change is “top of agenda for China.”

The goal will be a challenge for China, which relies heavily for its electricity on coal, one of the most carbon-intensive fossil fuels.

China released the equivalent of 10 billion tons of carbon dioxide, or CO2, into the atmosphere in 2018, according to the Global Carbon Project that tracks emissions worldwide. That was almost twice as much as the United States and three times as much as the European Union.

Several other major emitters have set earlier deadlines, with the EU aiming to be carbon neutral by 2050. Frans Timmermans, who leads the EU executive’s efforts on climate change, welcomed Xi’s announcement.

“We need decisive action from every country to keep temperatures under control, tackle climate change and keep our planet inhabitable,” he said.

The United States has so far not set such a goal. President Donald Trump, who once described climate change as a hoax invented by China, has started the process of pulling the U.S. out of the Paris accord.

If China fulfills Xi’s goal, it could prevent 0.4 to 0.7 degrees (0.2 to 0.4 degrees Celsius) further warming for the world, according to “very rough estimates” by MIT management professor John Sterman, who models and tracks emission reductions and pledges with Climate Interactive.

But much depends on how they do their emissions reduction and how soon they cut them, he said, adding he has to do a more thorough analysis.

“That’s a lot,” Sterman said. “China’s by far the world’s big emitter. They're emitting more than the EU and US together.’’

“It puts a lot more pressure on the United States,” Sterman said.

Perhaps even more important than the carbon neutrality pledge is the effort to peak carbon dioxide emissions before 2030 instead of by 2030, Sterman said. Carbon dioxide’s more than 100-year lifetime in the air makes earlier emission cuts more effective than promises in the future, he said.

“Emissions that don’t happen between now and 2030 are going to reduce warming a lot more than the same emission reductions after 2060,” Sterman said.

However, pledges are not the same as actions. What’s needed is signs of action, such as eliminating plans to build new coal-fired power plants, cutting subsidies for coal power and getting off coal entirely, Sterman said. Coal is the biggest carbon dioxide emitter of power sources.

Twenty-nine nations before China have pledged to achieve climate neutrality in different years, according to the Carbon Neutrality Coalition.

With China, the 30 countries that have some kind of carbon neutrality pledges, account for about 43% of the world’s carbon dioxide emissions from the burning of fossil fuels. The largest polluting countries not on the list are the United States, India, Russia, Iran, Saudi Arabia, Indonesia, South Africa, Turkey, Brazil and Australia.