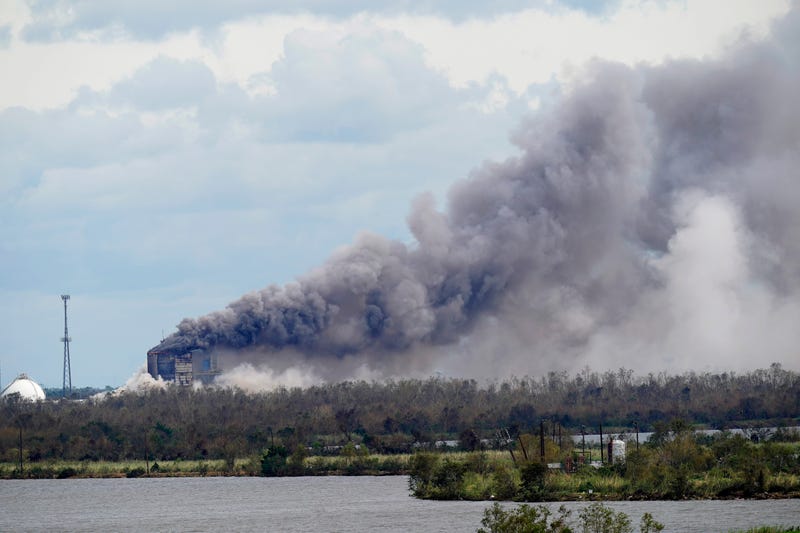 Photo credit A fire at a chemical plant, BioLab Inc., that handles chlorine for swimming pools burns on Thursday, Aug. 27, 2020, in Westlake, La., in the aftermath of Hurricane Laura. (AP Photo/Gerald Herbert)
By The Associated Press

LAKE CHARLES, La. (AP) — A fire at a Louisiana chlorine plant erupted with thick, billowing smoke Thursday after Hurricane Laura plowed through part of the country's petrochemical corridor with storm surges and fierce wind, forcing residents around the plant to shelter in their homes.

The damage came three years to the month after the record rains of Hurricane Harvey inundated Houston's refineries, storage tanks and chemical plants, unleashing dozens of toxic spills into surrounding communities' air, land and water. State and federal aircraft were heading into the air over the battered Louisiana coast Thursday, looking for signs of any other industrial damage or releases from Laura.

BioLab’s corporate parent said the plant had been shut down and evacuated ahead of the storm, and no plant employees were injured.

Authorities ordered people around the plant in the heavily industrialized Lake Charles area to stay in their homes, with doors and windows shut, when the blaze was discovered after first light after the storm. The state Department of Transportation closed Interstate 10 in the area, diverting traffic.

State police spokesman Nick Manale said hurricane winds of well over 100 mph (160 km/h) appeared to be a factor, although the cause remained under investigation. State police knew of no reports of injuries, including exposure to hazardous fumes.

The fire sent black smoke billowing high above an interstate overpass, dominating the skyline of the damaged city. Crews battled the still-smoldering fire into early evening. Downed trees, utility lines and other wreckage initially made reaching the fire difficult.

Lynn Goldman, dean of the School of Public Health at George Washington University and a former assistant administrator for toxics at the EPA, called chlorine “dangerous stuff."

Chlorine is quite damaging to the lungs and “you certainly don’t want to inhale that,” Goldman said.

Anne Rolfes in New Orleans, founder of an environmental group called The Bucket Brigades, said Louisiana requires comparatively little in terms of storm preparation, despite the state's status as a top five oil and gas producer, and despite the frequent storms that lash the coast.

“In general, these facilities have a long history of not preparing. They cry ‘act of God’ but it’s failure to prepare time and again,” she said.

State environmental officials planned to survey the entire storm area from the air to look for signs of any other industry fires or leaks, Langley said.

“We’ll be doing flyovers, looking for sheen on the water, any little thing we can see — orphan drums, things like that," Langley said.

Reports of leaks or other industrial problems can take days to emerge after severe weather, because many plants have evacuated and locked down their facilities, and roads and phone lines are iffy.

EPA spokeswoman Molly Block said the agency had been working with other governments and contractors before the storm hit to assess the storm security of 23 Superfund sites in Louisiana and 35 in Texas.