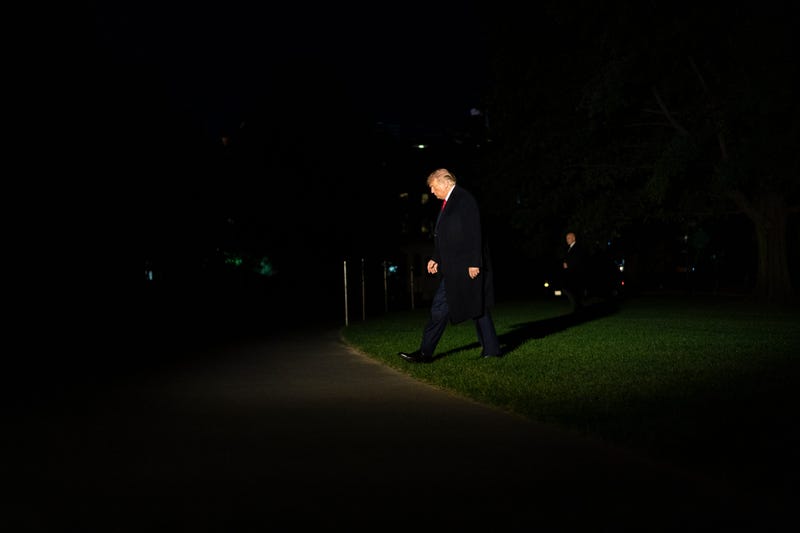 Photo credit FILE - In this Thursday, Oct. 1, 2020, file photo President Donald Trump walks from Marine One to the White House in Washington as he returns from Minnesota. The Republican president has trailed Democratic challenger Joe Biden in polls for most of the year. Trump’s approval ratings barely budge, consistently ranking him as among the weakest first-term presidents in living history. And for five consecutive months, no more than roughly 3 in 10 voters have believed the nation is moving in the right direction. (AP Photo/Carolyn Kaster, File)
By The Associated Press

NEW YORK (AP) — The closing days of the presidential campaign were already dominated by the worst public health crisis in a century, millions of jobless Americans, a reckoning on civil rights, the death of a Supreme Court justice and uncertainty about President Donald Trump's willingness to accept the election outcome.

And that was before the president woke up in a military hospital on Saturday — the most powerful man in the world unable to escape a virus that has so far killed more than 200,000 Americans.

One month before Election Day and with ballots already being cast in some states, there are few parallels in American history to such a stunning collision of crises in the late stage of a campaign. But beneath the volatility, the broad contours of the 2020 contest are remarkably stable.

The election began as, and remains, a referendum on Trump’s turbulent presidency.

The Republican president has trailed Democratic challenger Joe Biden in polls for most of the year. Trump’s approval ratings barely budge, consistently ranking him as among the weakest first-term presidents in living history. And for five consecutive months, no more than roughly 3 in 10 voters have believed the nation is moving in the right direction.

“You have all these events, but the basic structure of everything has stayed fairly intact,” said veteran Democratic strategist James Carville.

Even before Trump's hospitalization, Republicans were growing increasingly concerned about the direction of the election. Trump's allies were particularly worried that his troubling debate performance on Tuesday might further alienate key groups of swing voters: women and college-educated voters, among them.

Still, it is hard to underestimate the weight of the uncertainty looming over the next four weeks.

Beyond Trump’s health or the economy, the pillars of American democracy — an independent judiciary, a strong legislative branch and a fair and free electoral system — are under stress.

He noted, however, that an incredibly small slice of voters are truly undecided.

“It’s good news for Joe Biden, because he’s established a lead that Trump has to somehow break, and as you get closer to the election it’s harder to change peoples' minds," Luntz said.

Even if he recovers quickly, the president will be physically unable — at least for two weeks or so — to lead the large, in-person rallies that have long served as the lifeblood of his political operation. The outbreak has also hit his senior political team. Campaign manager Bill Stepien, GOP chair Ronna McDaniel, first lady Melania Trump and a handful of other advisers have been infected in recent days.

It's rare for a president to confront such a significant personal health crisis so close to Election Day. Ronald Reagan was shot shortly after taking office in 1981, while Dwight Eisenhower suffered a serious heart attack more than a year before his 1956 reelection.

As Trump recovers in the hospital, the election is further complicated by his attempts to undermine the integrity of the election.

In Tuesday's debate, he repeated his baseless claims of voter fraud and refused to say he would accept the election outcome if he lost. He also declined to condemn white supremacists and called on his supporters to closely monitor voting places, which critics fear may lead to widespread voter intimidation.

Not since perhaps Abraham Lincoln's election in 1860 has there been such doubt about the peaceful transfer of power in the United States, said Republican strategist Steve Schmidt.

Schmidt, co-founder of the anti-Trump Lincoln Project, is no stranger to final-weeks political drama, having led John McCain’s presidential campaign in 2008. A global financial meltdown rocked the contest that fall.

“You have an American president threatening political instability ... and at the same time making wild accusations and spreading conspiracy theories about the legitimacy of an American election,” Schmidt said.

At the same time, local election officials in key states are wading through a blizzard of legal challenges. As Democrats work to make voting easier during the pandemic, Trump's team and its GOP allies have used a combination of threatening letters, lawsuits, viral videos and presidential misinformation to fight election procedures on a county-by-county basis.

Amid legal and health concerns, it's difficult for pollsters and campaigns to predict how many voters will ultimately cast ballots.

Stacey Abrams, a former Democratic gubernatorial candidate in Georgia now focused on voting rights, said she fears that the Republican tactics will roil elections up and down the ballot. She's encouraging people to make a specific plan to vote.

“We’re doing the right thing, which is telling people not to panic," Abrams said.