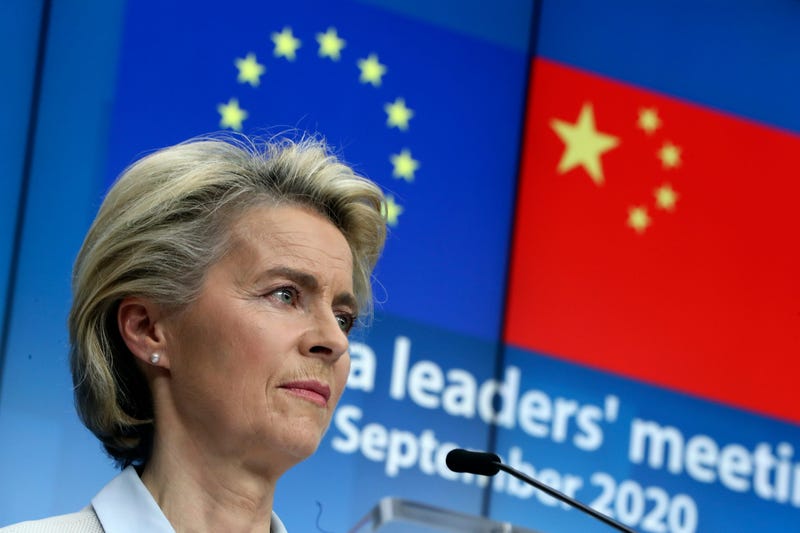 BRUSSELS (AP) — The European Union on Monday urged China to further open its markets up to European companies and prove that it really does want to secure an investment agreement this year with the bloc, its largest trading partner.

As an economic competitor to China, the 27-nation EU has struggled to balance its commercial interests against its concerns for human rights in the country, particularly as Beijing has grown more assertive in recent years.

Von der Leyen, who leads the EU’s executive body that manages trade on behalf of the member countries, noted that trade and investment talks have been stepped up but despite some recent progress “a lot, a lot, still remains to be done.”

“The European market is open, and European companies must have fair and equal access to the Chinese market in return,” she told reporters. Xi did not take part in the post-summit news conference.

Citing a lack of opportunities in China's communications, IT, biotech and health care sectors, she said “we see that our investors just face too many barriers in these key sectors, and for us, with market access, it’s not just a question of meeting halfway, but it’s a question of rebalancing the asymmetry.”

“China has to convince us that it is worth having an investment agreement,” von der Leyen said, acknowledging the struggle involved in securing one by the end of the year as the Europeans had hoped.

Turning to human rights issues, Michel said the three had a “quite intense discussion” with Xi, notably on China's restive far western province of Xinjiang, where authorities have cracked down on local Uighers. Michel said Xi appears willing to allow visits into the region by diplomats to check what’s happening. Merkel said the details must still be thrashed out.

Chinese officials have repeatedly denied allegations of genocide, forced sterilization and the mass detention of nearly 1 million Uighur Muslims in Xinjiang as lies fabricated by anti-China forces. They claim that the Uighurs are treated equally, and that Beijing always protects the rights of China's ethnic minorities.

Michel said the Europeans also underlined that China’s national security law for Hong Kong “continues to raise grave concerns,” that the region's autonomy should be respected and that “democratic voices” in Hong Kong should be heard.

They also encouraged Xi to help tackle the coronavirus pandemic — which was first detected in the Chinese city of Wuhan late last year — and contribute to vaccine research by cooperating with international organizations like the World Health Organization.

“It is important also to continue understanding the origins of the pandemic and therefore we were very clear that it is very important to give WHO all the possibilities to lead its investigations on the origin of COVID-19,” von der Leyen said.

The spread of the pandemic has created new obstacles to EU-China ties, notably what Brussels sees as a China-orchestrated campaign of disinformation about the disease that could put lives at risk.

The EU has seen over 142,700 confirmed virus-related deaths from the pandemic, according to a tally by Johns Hopkins University, but experts say all numbers undercount the true toll due to missed cases and limited testing.

David Rising in Berlin contributed to this report.