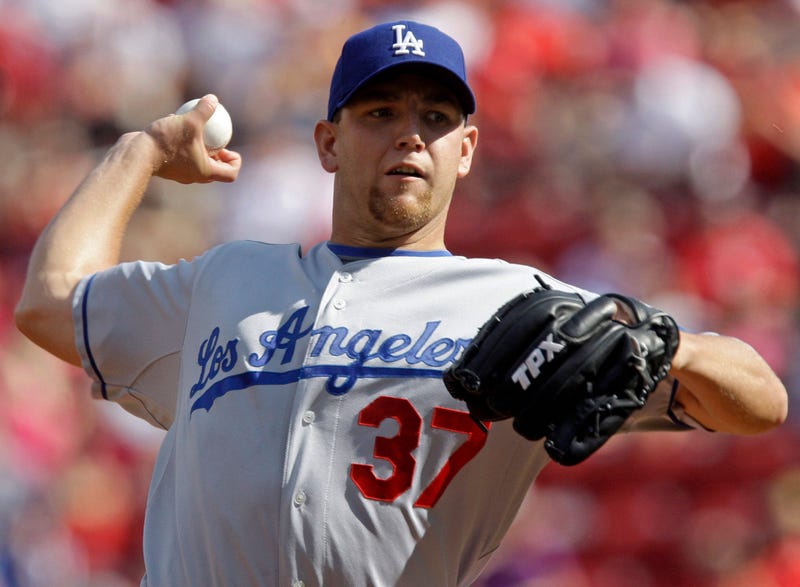 Photo credit FILE - In this Aug. 29, 2009, file photo, Los Angeles Dodgers pitcher Charlie Haeger throws to a Cincinnati Reds batter during a baseball game in Cincinnati. Police have probable cause to arrest 37-year-old Charles Haeger, a former baseball player, on suspicion of murder and aggravated assault in a fatal shooting Friday, Oct. 2, 2020, in a Phoenix suburn, said Sgt. Ben Hoster, a Scottsdale Police Department spokesman. The victim’s identity was not released. (AP Photo/Al Behrman, File)
By The Associated Press

SCOTTSALE, Ariz. (AP) — The unoccupied vehicle of a former professional baseball player sought in the shooting death of his ex-girlfriend in a Phoenix suburb was found Saturday found near Flagstaff in northern Arizona, police said.

Police have probable cause to arrest 37-year-old Charles Haeger on suspicion of murder and aggravated assault in the fatal shooting Friday, said Sgt. Ben Hoster, a Scottsdale Police Department spokesman.

The victim was identified by police Saturday night as Danielle Breed, 34.

Though the vehicle was discovered near Flagstaff, “Haeger is still outstanding," Hoster said. “We are coordinating with law enforcement in northern Arizona as we continue to search for the suspect."

According to mlb.com, Haeger was a pitcher drafted by the Chicago White Sox in 2001, and he played 83 innings in the the major leagues. His career included stints with the Boston Red Sox, Seattle Mariners and Los Angeles Dodgers organizations.

Hoster said investigators determined that a male roommate of the victim heard gunshots when he returned to the residence Friday and that moments later Haeger emerged from the victim's bedroom with a handgun.

“Haeger then pointed the handgun at the roommate. The roommate quickly escaped out of the back of the residence, and he was able to get a neighbor to call 911," Hoster said in a statement.

Haeger “should be considered armed and dangerous," and anyone with information on his whereabouts should call 911 immediately, the statement said.