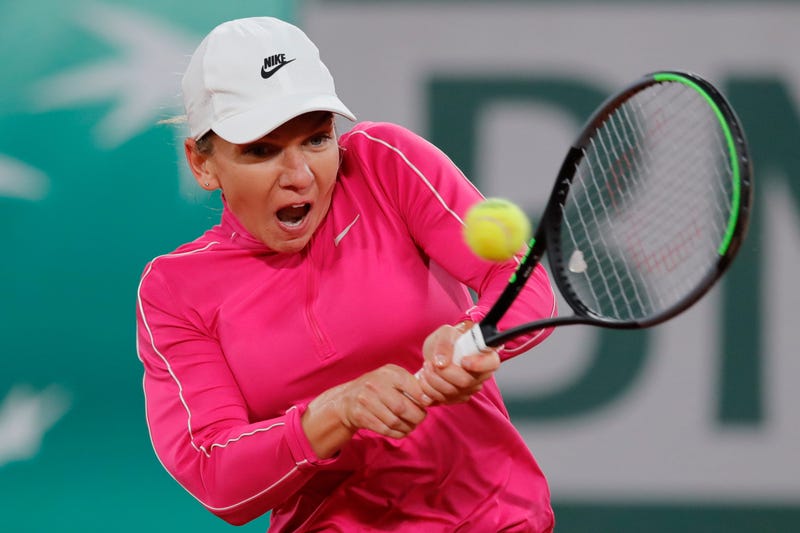 PARIS (AP) — Top-seeded Simona Halep won 10 straight games in beating Sara Sorribes Tormo 6-4, 6-0 to reach the second round of the French Open on Sunday and extend her winning streak to 15 matches.

Wearing thick black leggings and a long-sleeved pink jersey to combat the chilly conditions on Court Philippe Chatrier, the 2018 champion made a series of unforced errors and trailed 4-2.

But then she found her range, clinching the first set with a hold to love and sealing victory on her first match point when her Spanish opponent clipped a forehand wide.

She is ranked second but seeded first at Roland Garros because defending champion Ash Barty skipped coming to Paris because of coronavirus concerns. Halep won titles on clay in in Prague and Rome and her winning run — interrupted by the pandemic — dates to February.

She next faces either countrywoman Irina Camelia Begu or Jil Teichmann of Switzerland.

Halep was not alone in wrapping up warm in the cold.

The tenth-seeded Azarenka fumed when match officials didn’t immediately send her and opponent Danka Kovinic back to the locker-room during a rain interruption.

“I am going to get frozen,” she complained. “No. I’m not waiting here a couple of minutes because I’m cold. It’s eight degrees, eight degrees, I live in Florida, I am used to hot weather.”

Still, she made short work of her match, beating Kovinic 6-1, 6-2. She next faces either Venus Williams or Anna Karolina Schmiedlova, who were playing their match later Sunday.

Coronavirus restrictions mean only 1,000 people are allowed per day at the tournament in western Paris.

But only 150 were there to see 11th-seeded David Goffin begin his match against Next Gen ATP Finals champion Jannik Sinner at just after 11 a.m. under the new Chatrier roof.

Goffin, a former quarterfinalist here, was the first seeded player to be knocked out when he lost 7-5, 6-0, 6-3.

In the pick of Sunday's later matches, three-time Grand Slam winners Andy Murray and Stan Wawrinka were playing on Chatrier in the 21st meeting between the veterans. Wawrinka won here in 2015 and Murray lost the final to Novak Djokovic the following year.