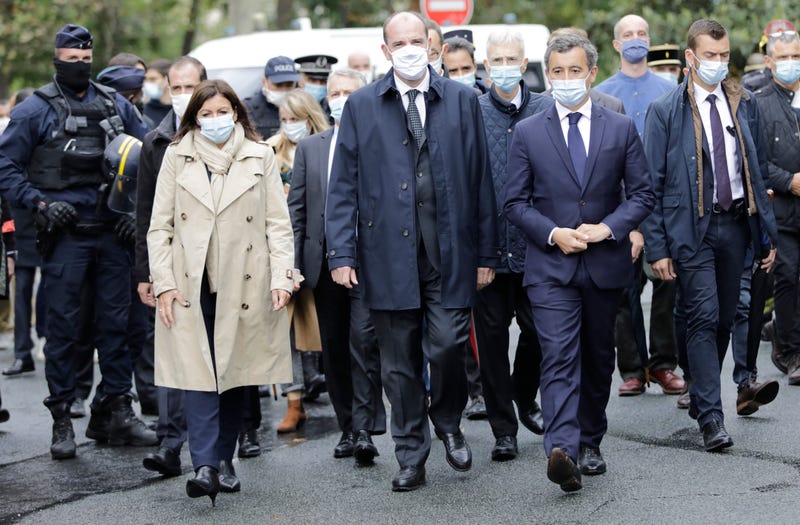 Photo credit From the left, Paris mayor Anne Hidalgo, France Prime Minister Jean Castex, and Interior Minister Gerald Darmanin arrive on the scene after a knife attack near the former offices of satirical newspaper Charlie Hebdo, Friday Sept. 25, 2020 in Paris. French terrorism authorities are investigating a knife attack that wounded at least two people Friday near the former offices of the satirical newspaper Charlie Hebdo in Paris, authorities said. A suspect has been arrested. (AP Photo/Lewis Joly)
By The Associated Press

Interior Minister Gerald Darmanin visited a synagogue Sunday ahead of the evening start of Yom Kippur, the Jewish Day of Atonement, and said more than 7,000 police and soldiers are protecting Jewish services this weekend. France has Europe’s largest Jewish community.

“I came to assure ... members of France’s Jewish community of the protection of the state,” Darmanin told reporters. “Because we know that Jews are particularly targeted by Islamist attacks and we should obviously protect them.”

Darmanin defended authorities’ handling of a double stabbing Friday outside the former offices of the satirical newspaper Charlie Hebdo, saying intelligence services have prevented 32 potential terrorist attacks over the past three years.

Coordinated Islamic extremist attacks on Charlie Hebdo’s Paris newsroom and a kosher supermarket in January 2015 killed 17 people, and Friday’s stabbing came as the trial into those attacks is under way.

The suspected assailant in Friday’s attack told investigators that he was targeting Charlie Hebdo after it recently republished caricatures of the Prophet Muhammad, according to a judicial official. Two people were wounded and several suspects are in custody.

One suspect arrested after Friday’s stabbing was later released — and his lawyer says that he had tried to stop the assailant and should be considered a hero instead.

Lawyer Lucie Simon told France-Info that her client, a 33-year-old French resident from Algeria identified only as Youssef, chased the attacker. Simon said the assailant threatened Youssef with a kitchen cleaver, so Youssef fled and told police — who promptly arrested him.