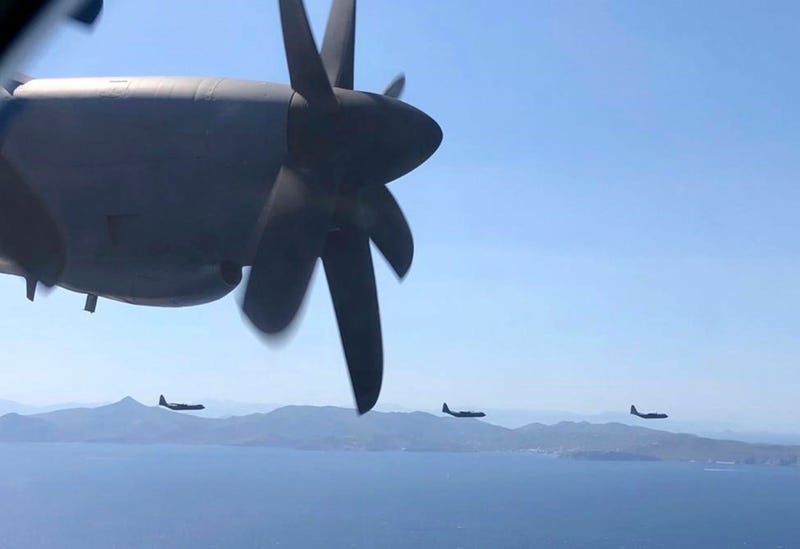 Photo credit In this photo provided by the Greek Defense Ministry, military planes take part in a Greek-US military exercise near Athens, on Friday, Sept. 11, 2020. Prime Minister Kyriakos Mitsotakis was to outline the details of a program Saturday to boost Greece's defense capabilities, amid heightened tensions with neighboring Turkey over rights to resources in the eastern Mediterranean. (Greek Defense Ministry via AP)
By The Associated Press

The army will obtain new anti-tank weapons, new torpedoes and new guided missiles, as well as hire 15,000 more people over the next five years, he said.

Nominally NATO allies, Greece and Turkey have deployed naval and air force units to assert the countries’ competing claims over energy rights in the eastern Mediterranean. Turkish survey vessels and drill ships continue to prospect for gas in waters where Greece and the European island nation of Cyprus claim exclusive economic rights.

The increasing tension at sea has led to concerns that the situation could spiral into armed conflict.

“We are a peaceful country, ready to cooperate with all... including with Turkey," Mitsotakis said, speaking from the northern city of Thessaloniki. If Turkey disagrees on the delineation of maritime boundaries in the eastern Aegean, he said, then a solution could be found at the International Court.

Turkey accuses Greece of trying to grab an unfair share of maritime resources and Cyprus of disregarding the rights of Turkish Cypriots on the ethnically divided island.

Greece and Turkey have conducted rival naval exercises amid their standoff. On Friday, Turkey announced live-fire exercises starting Saturday and running through Monday between its southern coast and northern Cyprus.

“Ankara is now adding to the provocations in the Aegean, the undermining of peace in the entire Mediterreanean," Mitsotakis said, noting that Greece's armed forces had lacked funding in recent years during a recession. “The time (has come) to reinforce the armed forces as a legacy to the security of the country."

Athens has been pushing for the European Union to impose sanctions on Turkey unless Ankara withdraws its research vessel, the Oruc Reis, from the area of the eastern Mediterranean that Greece claims as its continental shelf.

The prime minister also addressed economic measures to tackle the impact of the coronavirus pandemic, announcing some tax cuts and the extension of subsidies.