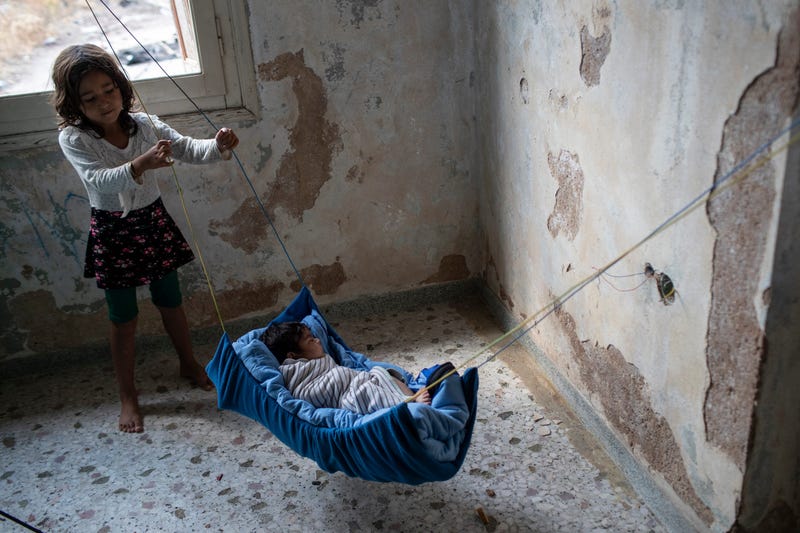 Photo credit A two-month old baby from Afghanistan sleeps at an abandoned building near Mytilene town, on the northeastern island of Lesbos, Greece, Tuesday, Sept. 15, 2020. Just over 6% of people have been rehoused, following a recent fire that destroyed Greece's biggest camp for refugees and migrants making 12,500 people homeless, in a new temporary facility under construction on the island of Lesbos. (AP Photo/Petros Giannakouris)
By The Associated Press

Prime Minister Kyriakos Mitsotakis made the proposal at an Athens meeting with European Council President Charles Michel as Greece works to house thousands of asylum-seekers left homeless after fires gutted an overcrowded refugee camp on the island of Lesbos.

The government has said the fires were set deliberately by migrants protesting a coronavirus lockdown, and authorities Tuesday announced the arrests of five suspects for their alleged involvement.

The suspects, all Afghan, including two minors transferred to mainland camps after the fires, were being questioned by police.

Some 12,500 people fled last week's fires at the Moria camp last week. Most of the displaced migrants remain homeless and many are refusing to leave a nearby road where they have camped out for almost a week, fearing they could be detained for months at a new camp site the Greek army is building.

"We have already started the new facility, and that is where the flags of Greece and the European Union must fly,″ the Greek prime minister said. ″In practice, there must be shared responsibility not only for construction, but also for the operation of the camp.″

Michel, who flew to Lesbos after his talks in Athens, did not comment directly on Mitsotakis' proposal but said the EU was determined to show greater solidarity toward Greece. “And it’s why I am here, first of all, in order to express my solidarity,” Michel said on the island.

The EU's executive commission could present its proposals for revising the bloc's migration policies as early as next week. The plans are expected to include tougher border policing and a renewed effort to have more uniform asylum procedures across EU member nations.

“Is it easy? Not it’s not easy. We know that it’s a very complex political debate," Michel said. "It is everywhere in the world, and it’s also the same in Europe. But we need progress.”

Most of the 5,000 spaces so far available in tents erected by army personnel on Lesbos remain empty, with only 800 migrants having agreed to relocate, officials said Tuesday.

Greece’s migration minister said the government will use force, if necessary, to move homeless migrants to the tent city.

Notis Mitarachi said efforts to relocate migrants on a voluntary basis, with the help of government translators and pamphlets being distributed to asylum-seekers, were continuing.

But speaking to Greek broadcaster Mega TV, he added: “If this is not possible through discussion, then the police will have to be used. It is their obligation to be moved to the new site.”

Mitarachi said it would take at least six months to build a permanent structure that will replace the Moria camp and be at a different location, acknowledging that migrants and refugees would spend the winter in tents.