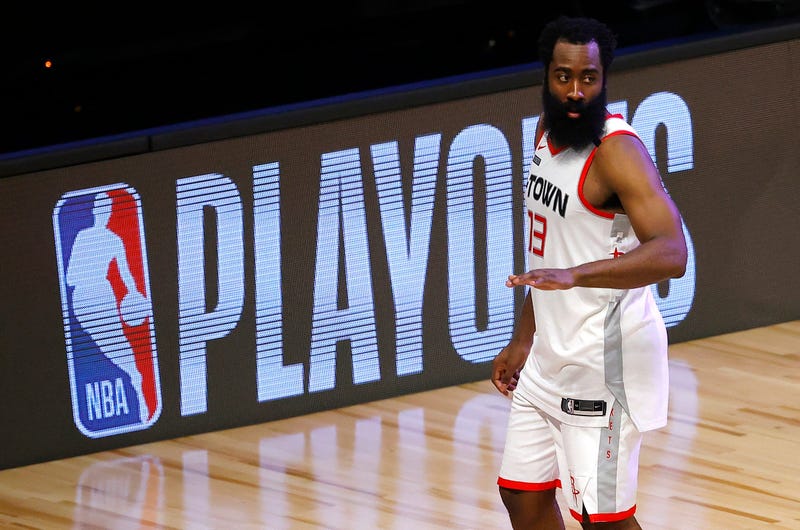 LAKE BUENA VISTA, Fla. (AP) — In a crammed schedule after the NBA's restart, rest has been hard to find.

Teams played eight games in two weeks after play resumed on July 30, then jumped into the postseason. Midway through the first round, fatigue might start to show.

That's why wrapping up series quickly, almost always a good thing, might be even more important this year. Miami has its chance. The Lakers and Bucks look like they still might.

And Houston might regret if it let its opportunity get away.

After wasting a late lead and dropping Game 3 in overtime, the Rockets look to regain control of their series against Oklahoma City when the teams meet Monday.

“Playoffs, you've got some adversity somewhere and this is adversity,” Rockets coach Mike D'Antoni said. “Now we've got to come out, make another statement, so that's what we're going to do.”

Houston had a five-point lead with under a minute remaining in regulation Saturday, before the Thunder rallied for a 119-107 victory in overtime that trimmed the Rockets' lead to 2-1. Had Houston held on to go ahead 3-0, it would have given them a lead that has never been blown in the NBA playoffs.

The Heat haven't had any such adversity. With Jimmy Butler and Goran Dragic leading the way, they have a 3-0 lead over Indiana.

Milwaukee and Los Angeles dropped their openers, the first time both No. 1 seeds started with losses to the No. 8s since 2003. But they have both rebounded with consecutive victories, easily enough that they seem capable of finishing things off in five games.

The Rockets still could, but in a series between teams that appear so evenly matched, the momentum belongs to the Thunder.

“When you look at the fact that we got a win last night, we're playing again tomorrow afternoon and we've got to do it all over again,” Thunder coach Billy Donovan said.

A look at Monday’s games:

— NEED TO KNOW: Milwaukee has bounced back from its Game 1 loss by winning the next two games by an average of 14.5 points. Giannis Antetokounmpo has had at least 25 points, 10 rebounds and five assists in all three games.

— KEEP AN EYE ON: Brook Lopez. He struggled offensively and defensively in the game Orlando won but averaged 18 points on 68.2% shooting in Milwaukee's victories.

— PRESSURE IS ON: Orlando's starters. The Bucks have broken out quickly in the last two games and the Magic know they can't keep spotting the NBA's top team such an early cushion.

— NEED TO KNOW: Oklahoma City seems to have figured out Houston's high-scoring offense. The Rockets scored 123 in Game 1 but that dropped to 111 in Game 2 and 107 even with an extra five minutes in Game 3. D'Antoni said that his defense is playing well but the offense hasn't been in top form.

— KEEP AN EYE ON: James Harden and Chris Paul. The referees surely will, as they continue to use every trick they know to draw fouls and gain extra possessions. They're late-game tumble that resulted in a foul on Paul but could have been a double-foul was just one example of that.

— INJURY WATCH: D’Antoni said Russell Westbrook’s quadriceps injury was feeling better, but he still isn’t sure when the star guard will play. He also said Harden’s shoulder was bothering him, but joked that the NBA’s leading scorer is going to keep playing heavy minutes anyway.

— PRESSURE IS ON: Eric Gordon. The Rockets need a cleaner performance than he gave them in Game 3, when he shot 8 for 24 and missed eight of 10 3-point attempts.

— NEED TO KNOW: Miami has a 3-0 lead for the seventh time. The Heat went on to a sweep in four of the previous six.

— KEEP AN EYE ON: Goran Dragic. He's scored at least 20 points in all three games, giving him 10 such games in a Heat uniform. Only six players have more.

— INJURY WATCH: Nothing new, but the Pacers already had enough problems coming in without Domantas Sabonis.

— PRESSURE IS ON: Indiana's defense. The Pacers are surrendering more than 115 points per game in the series and allowed Miami to score 124 in Game 3, a franchise postseason record.

— NEED TO KNOW: The Lakers have contained a team that had been putting up plenty of points in the bubble. Portland's 108 points in Game 3 were the most its managed so far.

— KEEP AN EYE ON: Anthony Davis. He played passively in the first half of Game 3 and Portland led. He was aggressive in the second half and the Blazers had no chance. He is averaging 30 points in the last two games.

— INJURY WATCH: Rajon Rondo was set to be activated and perhaps play for the first time in the bubble in Game 3 but had back spasms before the game and couldn't play.

— PRESSURE IS ON: Jusuf Nurkic. After sitting out a year before making it back from a broken leg to play in the restart, Portland's center looks a little out of gas. He had only 10 points in Game 2 after managing nine the previous game.