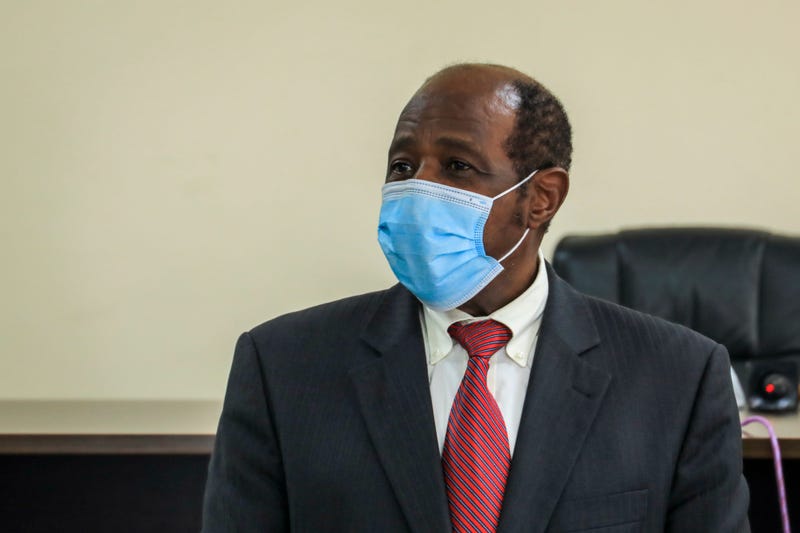 Photo credit FILE - In this Monday, Aug. 31, 2020 file photo, Paul Rusesabagina appears in front of the media at the headquarters of the Rwanda Bureau of Investigations building in Kigali, Rwanda. Rusesabagina, who inspired the film "Hotel Rwanda" for saving people from genocide and who is now accused of terrorism in Rwanda, has spoken to his family for the first time since being paraded in handcuffs on Aug. 31, 2020. (AP Photo, File)
By The Associated Press

KIGALI, Rwanda (AP) — The man portrayed as a hero in the movie ‘Hotel Rwanda’ has admitted in court that he backed a rebel group, but denied that he supported any violence or killings.

Paul Rusesabagina, in a pink prison uniform for his bail hearing on Friday, told the court in Kigali, the capital, that he helped to form the National Liberation Front in order to assist Rwandan refugees, but said he never supported violence.

The judge has postponed ruling on his application for bail until Oct. 2.

Rusesabagina, a Belgian citizen and U.S. permanent resident who has been a prominent critic of President Paul Kagame, is charged with 13 offenses that also include financing terrorism, complicity in murder, recruiting child soldiers, and forming a rebel group. If convicted, he faces a maximum of 25 years in prison. It’s not clear when his trial will begin.

Rusesabagina, 66, has lived outside Rwanda since 1996 but on Aug. 31, he suddenly appeared in the East African country in handcuffs.

Earlier this month, he described how he disappeared while visiting Dubai and then turned up days later in Rwanda, a country his family says he’d never return to voluntarily. Speaking to The New York Times with Rwandan authorities present, he said he thought the private plane he boarded in Dubai was going to Bujumbura, Burundi, where he had planned to speak to churches at a pastor’s invitation.

Instead, Rusesabagina stepped out of the plane and was surrounded by Rwandan soldiers, the report said. He said he was then tied up, couldn’t see anything and didn’t know where he was.

The Rwandan court has said he was arrested at Kigali International Airport, contradicting the earlier police version that he was arrested through “international cooperation.” Kagame earlier this month indicated that Rusesabagina may have been tricked into boarding the plane, adding; “It was actually flawless!”

Human Rights Watch has asserted that Rusesabagina was “forcibly disappeared,” saying that the lack of lawful international extradition proceedings suggests that Rwandan authorities don’t believe their evidence would stand up to independent scrutiny.

Rusesabagina had asked to be released on bail, citing poor health that has caused him to be taken to a hospital three times since his arrest.

He looked frail during his first court appearance.

“I assure the court that I will not flee from justice,” Rusesabagina said in his earlier bail application which was denied. His court appearance Friday was to appeal that rejection.

The denial of bail further alarmed his family, which along with some human rights and legal groups has expressed concern that his arrest is the latest example of Rwanda targeting critics. “We have no hope that he can be given fair justice in Rwanda and ask for his immediate release,” daughter Carine Kanimba said on social media earlier this month.

He also distanced himself from the activities of a rebel movement that is the armed wing of his opposition political platform, saying he was not the movement’s leader and that the group’s members should be held responsible. The armed wing has claimed responsibility for deadly attacks in Rwanda.

Rusesabagina is credited with saving more than 1,000 lives during Rwanda’s 1994 genocide that killed some 800,000 Tutsis and moderate Hutus. For his efforts he was awarded the U.S. Presidential Medal of Freedom. But he has faced criticism from Rwandan authorities in the years since he began speaking out against alleged human rights abuses by Kagame’s government.