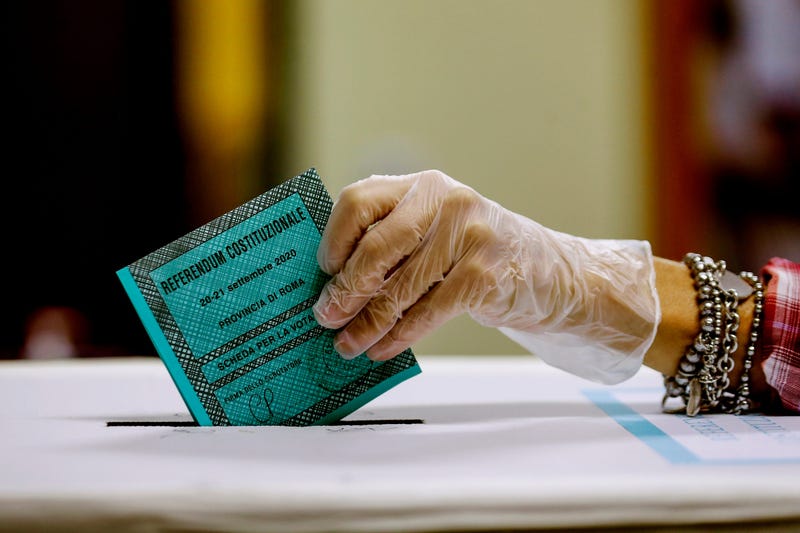 Photo credit A woman casts her ballot at a polling station, in Rome, Monday, Sept. 21, 2020. On Sunday and Monday Italians are called to vote nationwide in a referendum to confirm a historical change to the country's constitution to drastically reduce the number of Members of Parliament from 945 to 600. Eighteen million of Italian citizens will also vote on Sunday and Monday to renew local governors in seven regions, along with mayors in approximately 1,000 cities. (Cecilia Fabiano/Lapresse via AP)
By The Associated Press

ROME (AP) — Italians voted to reduce the number of national lawmakers by a third, preliminary results showed Monday, turning out in droves to cast ballots despite the coronavirus pandemic and strict hygiene protocols at the polls.

At the close of two days of voting Monday, the turnout in some regions was nearly 60%-75%, including those who voted from home or hospitals because they were quarantining or sick with COVID-19. An army of volunteers, wearing head-to-toe protective equipment, made house calls to ensure that even virus-affected Italians could cast ballots.

Those who went to polling centers had to follow strict protocols on wearing face masks and social distancing, with the elderly given precedence in lines and hand sanitizer stations ubiquitous.

Preliminary results from the Interior Ministry indicated that 69% of Italians voted “yes" on a constitutional referendum to reduce the number of national lawmakers. The referendum, which was backed by the ruling 5-Star Movement, would cut lower house lawmakers from 630 to 400 and those in the Senate from 315 to 200.

The 5-Stars' argument that the reduction brings Italy's bloated bureaucracy more in line with other European countries and will save tens of millions of euros a year appeared to sway voters.

Voters were also choosing new regional administrators in seven Italian regions: Campania, Le Marche, Liguria, Puglia, Tuscany, Valle d’Aosta and Veneto. Mayoral races also were being held in 1,000 towns and cities. The election had been scheduled for the spring but was postponed when Italy became the first country in the West to be struck by the outbreak.

Veneto Gov. Luca Zaia of the right-wing League party won his third mandate after helping Veneto avoid the worst of the pandemic, according to exit polls reported by the ANSA news agency.

Italy still has the second-highest confirmed virus death toll in Europe after Britain, with over 35,700 deaths. Experts say all figures understate the true impact of the pandemic due to limited testing and missed mild cases, among other factors.