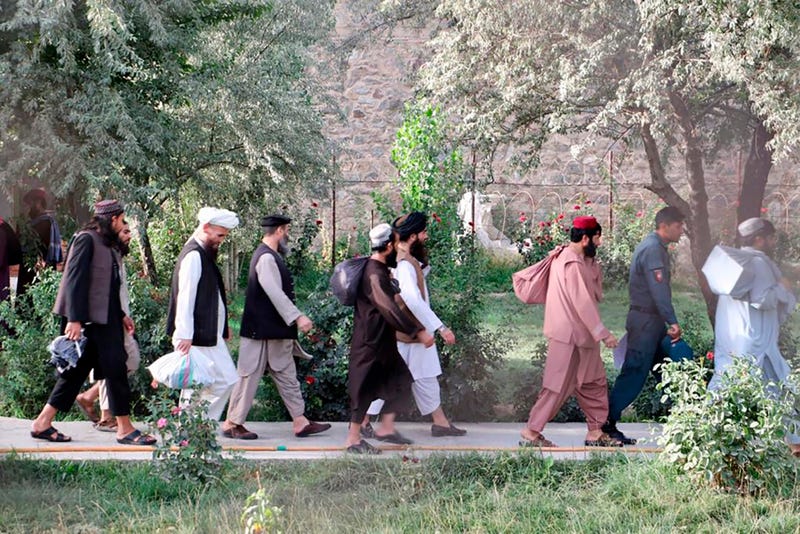 KABUL, Afghanistan (AP) — Afghanistan has released the first 80 of a final 400 Taliban prisoners, paving the way for negotiations between the warring sides in Afghanistan’s protracted conflict, the government said Friday.

Javid Faisal, spokesman for the National Security Council’s office, made the announcement. Taliban officials, speaking on condition of anonymity because they are not authorized to speak to the media, said 86 prisoners were freed. It wasn't immediately known when the remaining prisoners would be freed.

Prisoner releases on both sides are part of an agreement signed in February between the U.S. and Taliban. It calls for the release of 5,000 Taliban held by the government and 1,000 government and military personnel held by the insurgent group as a good will gesture ahead of intra-Afghan negotiations.

Talks are expected to be held in Qatar where the Taliban maintain a political office. Several Afghan leaders told The Associated Press talks could begin by Aug. 20.

These negotiations are to lay out a framework for a post-war Afghanistan. Washington's peace envoy Zalmay Khalilzad spent a year and a half negotiating the peace deal aimed at allowing American troops to return home and end America's longest military engagement.

U.S. troops have already begun leaving and by November less than 5,000 troops are expected to still be in Afghanistan down from nearly 13,000 when the agreement was signed Feb. 29.

American and NATO troop withdrawal is contingent on the Taliban keeping their commitment not to allow militant groups to use Afghanistan against the United States or its allies. The withdrawal is not tied to successful talks between the warring sides.

Last weekend, Afghan President Ashraf Ghani held a traditional council meeting known as loya jirga to get a consensus on the release of a final 400 Taliban he said were accused of serious crimes, saying without explanation that he could not unilaterally decide to release them.

Some of the 400 have been implicated in devastating bombings in the capital Kabul, During a televised talk Thursday with the U.S.-based Council on Foreign Relations, Ghani warned of dangers they could present to lasting peace in Afghanistan.

But for some in Afghanistan the talks with the Taliban mirror earlier negotiations with other insurgents, including warlord and U.S.-designated terrorist Gulbuddin Hekmatyar, who many say has a reputation for violence that exceeds the Taliban.

In 2016, Ghani negotiated a peace deal with Hekmatyar, whose Hezb-e-Islami group took responsibility for several bombings in Kabul, including one at a grocery story in the capital that killed a young family. The deal included removing Hekmatyar from the U.N. terrorist list. His group was also responsible for a 2008 attack on French soldiers — the largest international loss in a single battle in Afghanistan.

Also on Friday, a small bomb hidden in a motorcycle exploded near a mosque in the capital, just as worshipers were finishing their prayers, wounding a police officer. No one immediately took responsibility but the Islamic State group has in the past targeted mosques in Afghanistan.

The IS affiliate in Afghanistan has been targeted by Afghan security force, U.S. troops and the Taliban. A Department of Defense official previously said the peace deal with the Taliban is also intended to recruit the insurgent group into a coordinated fight to rid the region of IS.

The United Nations Mission in Afghanistan, known as UNAMA, tweeted that the footage “is deeply shocking ... investigation needs to be swift and open. If crimes are proven the criminals must be identified and held responsible."